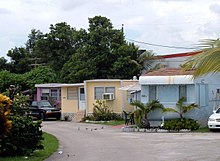 1958 photo of Zimmer trailer in a trailer park in Tampa, Florida. This area is now a gated community with new houses

A trailer park or caravan park is a temporary or permanent area for mobile homes and travel trailers. Advantages include low cost compared to other housing, and quick and easy moving to a new area, for example when taking a job in a distant place while keeping the same home.

Trailer parks, especially in American culture, are stereotypically viewed as lower income housing for occupants living at or below the poverty line who have low social status and lead a desultory and deleterious lifestyle. Despite the advances in trailer home technology, the trailer park image survives as evoked by a statement from Presidential adviser James Carville who, in the course of one of the Bill Clinton White House political scandals, suggested "Drag $100 bills through trailer parks, there's no telling what you'll find," in reference to Paula Jones.[1] It is also seen in the Canadian mockumentary Trailer Park Boys.

Tornadoes and hurricanes often inflict serious damage on trailer parks, usually because the structures are not secured to the ground and their construction is significantly less able to withstand high wind forces than regular houses. However, most modern manufactured homes are built to withstand high winds, using hurricane straps and proper foundations. 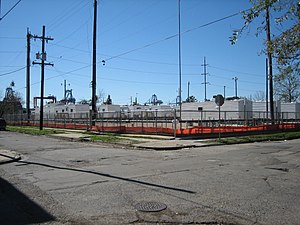 New Orleans in 2006 after Hurricane Katrina: A park in an unflooded part of town became the site of a FEMA trailer park for people whose homes were damaged or destroyed.

The negative perception of trailer parks was not improved by the creation of emergency trailer parks by the Federal Emergency Management Agency (FEMA) for the displaced victims of Hurricane Katrina, the quality and temporary nature of which was disputed.[2]

Many stereotypes have been developed regarding people who live in trailer parks, which are similar to stereotypes of the poor and the term trailer trash is often used[3] as an adjective in the same vein as the derogatory American terms white trash or ghetto. Though trailer parks appear throughout the United States, they are often associated with the Deep South and rural areas.

More recently referred to in the U.S. as "mobile home parks" or "manufactured housing communities", the stereotypes are often just that. Retirement communities exist in many locales that permit mobile home parks as "55+ parks" in keeping with the Housing for Older Persons Act (HOPA). Generally, at least one homeowner in these communities must be age 55 or over, and those under age 18 are rarely permitted to live there. These can be gated communities with amenities, such as swimming pools, clubhouses and onsite maintenance. Homes are often permanently installed on foundations, however, in certain circumstances, residents may not own the land their homes occupy.

Mobile home parks in the U.S. have become an attractive investment for large financial firms, such as Carlyle Group, Apollo Global Management and TPG Capital.[4] Over 100,000 US mobile home sites were estimated to be owned by large firms in 2019.[4] One firm, Stockbridge Capital Group, owner of about 200 mobile-home parks throughout the US "saw a return on investment of more than 30 percent between late 2016 and the end of 2017." [4] The company's expansion into this market was facilitated by $1.3 billion in financing from Fannie Mae, which has called mobile homes "inherently affordable."[4] Profitability for the firms owning the parks has in some cases been tied to rent increases, and has not necessarily translated into good maintenance of the mobile homes.[4]

Outside the United States[edit]

TRAVELLER PRIDE - mural located at the entrance to the authorised Halting site of St. Margaret’s Park in Ballymun

In Britain and Ireland, the term halting site is used in place of trailer parks. The biggest difference in Europe is the presence of unauthorised halting sites (or trailer parks). This stems from the practice of traditionally itinerant ethnic groups, such as the Romani and Irish Travellers, to periodically during the year set up a transient community. From the late 1970s onward there was also a growth in New Age travelers culture; these groups espoused alternative lifestyles combined with a Do-It-Yourself punk ethic. The latter were a commonplace phenomenon in Germany,[5] giving rise to expressions such as Wagenburg, Wagendorf, and Bauwagenplatz ("wagon fort", "trailer village" and "construction trailer site" respectively).

Either rejected from or refusing to seek entrance in municipally authorised halting sites, groups of families practising a nomadic lifestyle would establish themselves under the cover of darkness on idle land near urban centers. These unauthorised encampments were often resented by local people, perpetuating a cycle of violence, fear and discrimination. The use of land without the necessary permission also carried the threat of imprisonment for the squatting families, further worsening the socio-economic disadvantage experienced by these minorities.[6]

In Germany, the Netherlands and some other European countries, local law allows for normal camping at RV parks for a short time and seasonal camping for holiday makers, and also long-time camping (for years) with hardly movable travel trailers. Sometimes the inhabitants also cultivate a garden. Some cities allow a long-time camping lot to be the regular address registered with the authorities; others do not. Many of mobile home plots are offered by RV parks that allow for all sorts of camping and offer extra plots for mobile homes (static caravans).The cost for such a plot tends to be between 400 € and 1.500 € a year, depending on the location and facilities.

In France, living in a trailer or mobile home for more than three months is prohibited by law, even if the resident owns the land; however, building requirements and permissions for self building of recreational solid (static) country cottages are more relaxed in France if one stays within a certain amount of square meters.[citation needed]

In the United Kingdom, "trailers" are commonly known as static caravans, and are generally used for one of two purposes: firstly as holiday homes, designed for short-term living; and secondly as retirement homes for the elderly, designed for long-term occupancy. Both types of trailers usually enjoy good amenities and are surrounded by highly manicured gardens.[citation needed]

In Australia, there is generally no differentiation between a trailer park and an RV park. The term "caravan park" is used to refer to both.

In New Zealand, the suburb of Favona in Auckland is an area where trailer parks are concentrated.

Retrieved from "http://en.turkcewiki.org/w/index.php?title=Trailer_park&oldid=1001315868"
This website is a mirror of Wikipedia, and is not affiliated with the Wikimedia Foundation.
Categories:
Hidden categories: