Jump to navigation Jump to search
1959 film by Fred Zinnemann

The Nun's Story is a 1959 American drama film directed by Fred Zinnemann and starring Audrey Hepburn, Peter Finch, Edith Evans, and Peggy Ashcroft. The screenplay was written by Robert Anderson, based upon the popular 1956 novel of the same name by Kathryn Hulme. The film tells the life of Sister Luke (Hepburn), a young Belgian woman who decides to enter a convent and make the many sacrifices required by her choice.

The film is a relatively faithful adaptation of the novel, which was based on the life of Belgian nun Marie Louise Habets. Latter portions of the film were shot on location in the Belgian Congo and feature Finch as a cynical but caring surgeon.[2]

Gabrielle "Gaby" Van Der Mal (Audrey Hepburn), whose father Hubert (Dean Jagger) is a prominent surgeon in Belgium, enters a convent of nursing sisters in the late 1920s, hoping to serve in the Belgian Congo. After receiving the religious name of Sister Luke, she undergoes her postulancy and novitiate which foreshadow her future difficulties with the vow of obedience. She takes her first vows and is sent to a school of tropical medicine.

After passing her courses with high marks, along with some spiritual conflict, she silently resists the Mother Superior's request to purposely fail her final exam as a proof of her humility. Despite finishing fourth in her class, she is not assigned to the Congo but sent to a European mental hospital where she assists with the most difficult and violent cases, wasting her tropical medicine skills. A particularly violent schizophrenic (Colleen Dewhurst) tricks Sister Luke into opening the cell door in violation of the rules. She attacks Sister Luke, who barely escapes and once again faces the shame of her disobedience.

Eventually she takes her solemn vows and is sent to her long-desired posting in the Congo. Once there, she is disappointed that she will not be nursing the natives, but will instead work in a segregated whites/European patient hospital. She develops a strained but professional relationship with the brilliant, atheistic surgeon there, Dr. Fortunati (Peter Finch). Eventually, the work strains and spiritual struggles cause her to succumb to tuberculosis. Fortunati, not wanting to lose a competent nurse and sympathetic to her desire to stay in the Congo, engineers a treatment plan that allows her to remain there rather than having to convalesce in Europe.

After Sister Luke recovers and returns to work, Fortunati is forced to send her to Belgium as the only nurse qualified to accompany a VIP who has become mentally unstable. She spends an outwardly reflective but inwardly restless period at the motherhouse in Brussels before the superior general gives her a new assignment. Due to the impending war in Europe, she cannot return to the Congo, and is assigned as a surgical nurse at a local hospital.

While at her new assignment, Sister Luke's struggle with obedience becomes impossible for her to sustain, as she is repeatedly forced into compromises to cope with the reality of the Nazi occupation, including that they have killed her father. No longer able to continue as a nun, she requests and is granted a dispensation from her vows. She is last seen changing into lay garb and exiting the convent through a back door.

Fred Zinnemann was introduced to the source material by actor Gary Cooper. Zinnemann was immediately interested in an adaptation, but there was little traction from studios until Audrey Hepburn expressed her interest.[3]

The cast and crew included few if any Catholics. Fred Zinnemann was Jewish. Audrey Hepburn and Edith Evans were Christian Scientists. The film's writer, Robert Anderson, was a Protestant, and Peggy Ashcroft was Agnostic.[3] To ensure accuracy and fidelity, a number of consultants were used. The screenplay was reviewed by the literary editor of America, by a panel of Dominican Priests in Rome, and by the Los Angeles chapter of the National Legion of Decency.[4] The production team also corresponded regularly with Katherine Hulme, the author of the source material. The Kathryn Hulme collection at Yale University contains 37 of these letters.[5] Further, the director and many of the actresses in the film spent time in European convents prior to rehearsal and principal photography. Zinnemann describes the Catholic Church as somewhat hesitant at first, in part worried that the film would depict a romantic relationship between Sister Luke and Dr. Fortunati. Once the Church had more confidence in the production, there was a high level of collaboration leading to a high level of preparation that Zinnemann credits for the realism and emotional intensity of the film. Zinnemann also continued his usual practices of collaborating with the film's writer on the second draft of the screenplay (though not receiving a writing credit) and meeting with each major actor for an in-depth discussion of his or her character.[6]

To prepare for her role Audrey Hepburn met with both Hulme and Mary Louise Habets, the inspiration for the novel and film. The three spent a considerable amount of time together, apparently becoming known as "The 3-H Club." Hepburn and Habets had some surprising similarities. Both had Belgian roots and had experienced personal trauma during World War II including losing touch with their fathers and having their brothers imprisoned by Germans.[4] Habets later helped nurse Hepburn back to health following her near-fatal horse-riding accident on the set of the 1960 film The Unforgiven.

The cast was rounded out by Colleen Dewhurst, making her first screen appearance and Renée Zinnemann, the wife of the director who played the assistant of the Mother Superior (Edith Evans).[7][3] 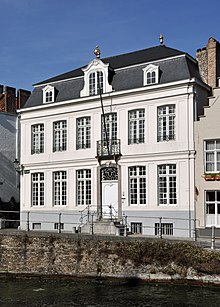 The film was shot partially in the then Belgian Congo, now Democratic Republic of the Congo with production based in then Stanleyville, now Kisangani and some scenes shot in Yakusu, a nearby center of missionary and medical activity where cast and crew met the famous missionary Stanley George Browne.[8] Fred Zinnemann had originally intended to film only the African scenes in color, with Europe rendered in stark black and white.[9] There was originally a scene towards the end of the film depicting three men endangered by quicksand and rapidly rising water, but it was never filmed due to adverse conditions.[6]

Interior scenes for the Belgian portions of the film were shot in Rome at Centro Sperimentale di Cinematografia and Cinecittà on sets designed by Alexandre Trauner.[3] Extras for these scenes were recruited from the ballet corps of the Rome Opera company. Zinnemann wanted actors who would be capable of precise and coordinated movement.[9]

Belgian exteriors were shot on location in Bruges although the novel took place in Ghent.[3]

According to Zinnemann, composer Franz Waxman's dislike of the Catholic Church was a conspicuous influence on early drafts of the score. This is part of the reason why the final scene has no score, an uncommon stylistic choice for the era.[10] Regardless of Waxman's work, Zinnemann had always wanted the film to end in silence.[9][6]

The original theatrical trailer for the film contains a brief shot of Gabrielle and her father sitting at a cafe. The shot is an excerpt from a scene that was removed from the final cut. The scene is alluded to in the final film when Dr. Van Der Mal mentions a restaurant reservation at the beginning of the film. Zinnemann removed the scene because he felt it was redundant and hindered the pace of the film's opening.[6]

The Nun's Story carries a 93% favorable rating on review aggregator Rotten Tomatoes, based on 15 reviews.

The Nun's Story was a major box office success in its day. Produced on a budget of $3.5 million, it grossed $12.8 million at the domestic box office,[1] earning $6.3 million in US theatrical rentals.[14] The Nun's Story was considered, for a time, to be the most financially successful of Hepburn's films and the one the actress often cited as her favorite.

The Nun's Story received its first official North American DVD release on April 4, 2006. The story behind the book and film was the subject of The Belgian Nurse, a radio play by Zoe Fairbairns, broadcast on BBC Radio 4 on January 13, 2007.

According to correspondences in the Kathryn Hulme collection at Yale University, both Mary Louise Habets and Kathryn Hulme were pleased with the film and its success.[5]

Retrieved from "http://en.turkcewiki.org/w/index.php?title=The_Nun%27s_Story_(film)&oldid=958917547"
This website is a mirror of Wikipedia, and is not affiliated with the Wikimedia Foundation.
Categories:
Hidden categories: