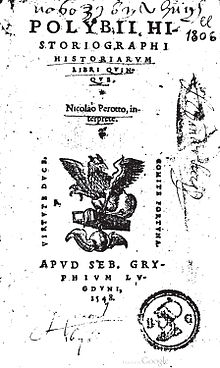 An early edition of The Histories

Polybius’ Histories (Greek: Ἱστορίαι Historíai) were originally written in 40 volumes, only the first five of which are extant in their entirety. The bulk of the work was passed down through collections of excerpts kept in libraries in the Byzantine Empire. Polybius, a historian from the Greek city of Megalopolis in Arcadia, was taken as a hostage to Rome after the Roman defeat of the Achaean League in Achaean War, and there he began to write an account of the rise of Rome to a world power.

The leading expert on Polybius' work was F. W. Walbank, who published a long commentary of Polybius, as well as a biography and several studies related to him.

Polybius' Histories begin in the year 264 BC and end in 146 BC (Polybius was born around 200 BC and died around 117 BC). He is primarily concerned with the 53 years in which Ancient Rome became a dominant world power. This period, from 220–167 BC, saw Rome subjugate Carthage and gain control over Hellenistic Greece. Books I through V cover the affairs of important states at the time (Ptolemaic Egypt, Hellenistic Greece, Macedon) and deal extensively with the First and Second Punic Wars. In Book VI he describes the Roman Constitution and outlines the powers of the consuls, Senate and People. He concludes that the success of the Roman state was based on their mixed constitution, which combined elements of a democracy, aristocracy, and monarchy. The remainder of the Histories discusses the period in which Rome came to dominate the Mediterranean, from the defeat of Hannibal in 201 BC to the destruction of Carthage and the Greek city-state of Corinth in 146 BC.

Tyche, which means fate or fortune, plays an integral role in Polybius’ understanding of history. Tyche takes on a double meaning in his work. It can mean fortune or happenstance, but tyche was also personified as a goddess according to Hellenistic convention. The exploration of Tyche is also the impetus for Polybius beginning his work, in that he discusses the fortunate events that led to Rome’s domination of the Mediterranean. 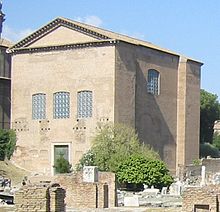 The Curia Julia in the Roman Forum, the seat of the Roman Senate.

In Book VI Polybius digresses into an explanation of the Roman constitution and he shows it to be mixed. The purpose for this is involved in the Hellenistic nature of the work, particularly his Greek audience. Greeks at this time believed that the strength of a state is manifested in the strength of its constitution. The mixed constitution was touted as the strongest constitution as it combined the three integral types of government: monarchy, aristocracy and democracy. Polybius makes further distinction in the forms of government by including the nefarious counterparts to the ones mentioned above; tyranny, oligarchy, and ochlocracy. These governments, according to Polybius, cycle in a process called anacyclosis or kyklos, which begins with monarchy and ends with ochlocracy. The Romans avoided this problem through the structure of their Republic (mixed government).

The first English translation, made by Christopher Watson, was published in London in 1568[1] as The hystories of the most famous and worthy cronographer Polybius. F. W. Walbank wrote a comprehensive commentary on the Histories in three volumes, which was published between 1957 and 1979.

Retrieved from "http://en.turkcewiki.org/w/index.php?title=The_Histories_(Polybius)&oldid=951309226"
This website is a mirror of Wikipedia, and is not affiliated with the Wikimedia Foundation.
Categories:
Hidden categories: