The Grim Adventures of Billy & Mandy

The Grim Adventures of Billy & Mandy (also known as Billy & Mandy) is an American animated television series created by Maxwell Atoms for Cartoon Network, and is the 14th of the network's Cartoon Cartoons (albeit on when it was part of Grim & Evil). It follows two children: Billy, a slow-witted happy-go-lucky boy, and Mandy, his dark and cynical best friend, who, after winning a limbo game to save Billy's pet hamster, gain the mighty Grim Reaper as their best friend in eternal servitude and slavery.

Billy & Mandy began as a series of segments on Grim & Evil, from which it was spun-off, along with Evil Con Carne, on August 24, 2001. The show ran as a separate series from June 13, 2003, to November 9, 2007. Underfist: Halloween Bash, a made-for-TV movie intended to serve as a pilot for a new spin-off series, aired on October 12, 2008. In addition to the episodes, three movies, two special episodes, and nineteen shorts were made. During its run, the series won two Emmy Awards and one Annie Award, with nominations for one Daytime Emmy Award, three Golden Reel Awards, and two other Annie Awards. Billy & Mandy has also been made into a video game as well as various licensed merchandise. 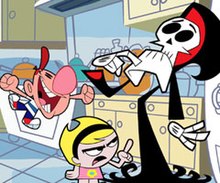 The show's main characters. From left to right: Billy, Mandy, and Grim. 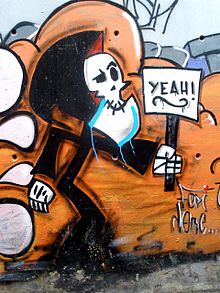 The series is centered around the exploits of Grim (voiced by Greg Eagles), a Jamaican-accented Reaper and Billy (voiced by Richard Steven Horvitz), a completely idiotic and happy-go-lucky boy. They are constantly assisted by Mandy (Grey DeLisle), a cynical and merciless girl. After Billy and Mandy cheated at a limbo match against Grim (in retaliation for putting the limbo rod too low for them to go under), he is enslaved in a permanently unwanted friendship with the children.[2] Grim is miserable in the first days of his servitude, and even fantasizes about killing them multiple times. However, as the time passes, he gradually adapts to the new life, and even grows to care for Billy and Mandy, if only somewhat. Despite this, he retains a love–hate relationship with the two and desires to eventually break free from his servitude.

Billy and Mandy use Grim's supernatural abilities and powers to venture into supernatural locations or environments, such as the Underworld, or the Netherworld, inhabited by an assortment of grotesque monstrous beasts. The pair also use Grim's enormously strong supernatural abilities or ties with a number of beastly characters to achieve goals or desires for themselves, often with twisted results. Famed fictional monsters including Dracula, the Wolfman, and the bogeyman are also comically depicted in the series.

Supporting characters include Irwin (Vanessa Marshall), a nerdy awkward boy who has a crush on Mandy; Harold (Richard Steven Horvitz), Billy's father who is even dumber than his son; Gladys (Jennifer Hale), Billy's loving yet mentally unstable mother; Mindy (Rachael MacFarlane), the snobby, stuck-up, and spoiled queen bee of Billy and Mandy's school; Sperg (Greg Eagles), the local bully who has a sensitive side; Fred Fredburger (C. H. Greenblatt), a simple-minded, irritating underworld creature who loves frozen yogurt and nachos; Dracula (Phil LaMarr), a selfish elderly vampire who is revealed to be Irwin's paternal grandfather in the final season of the show.

The show lacks continuity for the most part, as many episodes end with characters killed, exiled, or stuck in a situation. Characters sometimes display an awareness of some events from previous episodes, but there are no clear character arcs or coherent plot lines tying the show together.

The series had its genesis in 1995, when Maxwell Atoms, while he was a junior at the University of the Arts in Philadelphia, made a two-minute short film for his thesis project. Titled Billy and Mandy in: The Trepanation of the Skull and You, it centers around Billy and Mandy (prototype versions) discussing trepanning with each other. In the end, Mandy drills Billy's head, causing him to pass out after too much blood loss even though he says he feels great. The short had never been shown publicly until April 30, 2016, during the first annual TromAnimation Film Festival.[3] After the screening, Atoms uploaded the film, albeit in a deteriorating state after years of storage, on his YouTube channel.

Atoms originally pitched the Billy and Mandy concept to Nickelodeon, but it was only rejected once. The show's existence is the result of a viewer poll event by way of telephone and the Internet called Cartoon Network's Big Pick which was held from June 16 to August 25, 2000.[4] The three final choices were Grim and Evil (later splitting into two separate series: The Grim Adventures of Billy and Mandy and Evil Con Carne), Whatever Happened to... Robot Jones? and Longhair and Doubledome.[4] Out of the three, Grim and Evil attained the most votes with 57%; Robot Jones came in second place at 23% while Longhair and Doubledome received 20% of the vote.[4][5]

Originally part of Grim & Evil, Billy & Mandy served as the main show. In each episode, an Evil Con Carne short was put between two Grim shorts.[4] On occasion, it was the other way around, with two Evil shorts and one Grim short. The series premiered on August 24, 2001, during the Cartoon Cartoon Fridays Big Pick Weekend.

On June 13, 2003, the network separated the two segments and gave each their own full-length program. The short-lived Evil Con Carne show was cancelled once the already-produced season had aired. Some characters from Evil Con Carne occasionally appeared on The Grim Adventures of Billy & Mandy. General Skarr became an official character on the show in the episode "Skarred for Life", where he becomes Billy's new next-door neighbor, and in "Company Halt", the ninth episode of the final season which functions as the true series finale for Evil Con Carne, Ghastly, Hector, Boskov, and Stomach restart their evil organization and convince Skarr to join them, but their plans are ultimately foiled by Billy and Mandy, and Skarr goes back to living his life as a normal person.

The Grim Adventures of Billy & Mandy received critical acclaim and became one of Cartoon Network's top rated and most popular series.[citation needed] Common Sense Media gave the show a 3/5 star rating and stated that it has "goofy punchlines and obscure cultural references" and recommends the viewer age be at least 8 years old.[6] The series has won one Annie Award, two Emmy Awards and, including those three wins, has been nominated nine times for various awards. New episodes were broadcast on Cartoon Network's Fridays at 7:30pm to over 1 million viewers an episode.

Three TV movies were made for the series. The first one was called Billy & Mandy's Big Boogey Adventure and was released on DVD in April, 2007.[13] Common Sense Media gave the movie 2/5 stars and is meant for kids over the age of 8 calling it "undeniably gross and just as undeniably funny".[14] DVDverdict.com gave the movie a good review as well.[15]

A second movie, Wrath of the Spider Queen, was also released in 2007. It was based on a spider queen from Grim's distant past, who tries to take revenge on him because she was meant to be the reaper. Meanwhile, keeping up with the spider theme, Billy learns to love his spider son Jeff.[16]

On October 12, 2008, a third and final spin-off movie, titled Underfist: Halloween Bash, premiered. The movie's primary focus is on Irwin, Jeff the Spider, Hoss Delgado, General Skarr, and Fred Fredburger accidentally coming together to defeat an invasion of chocolate bar monsters, led by an evil marshmallow bunny, on Halloween night.[17]

The score composers for the series are Gregory Hinde, Drew Neumann and Guy Moon.[18][19][20] In addition, two songs were made for the show by Aurelio Voltaire, the episode "Little Rock of Horrors", which parodies the musical Little Shop of Horrors, features a song titled "BRAINS!"[21][22] and, in Billy & Mandy's Big Boogey Adventure, the song "Land of the Dead" is played in the opening credits.[23] Both songs are a part of the album Spooky Songs For Creepy Kids.[21] The season two episode "Battle of the Bands" also featured the song "Darkness" by metal band SPF 1000. There was also an instance at the end of the Christmas special entitled "Billy & Mandy Save Christmas", where the end credits music is the song "Round and Round" by heavy metal band Ratt.

A video game inspired by the series was developed by Midway Games, and released on October 2, 2006.[24] It is a 3D fighting game. The video game received fair to good reviews: GameSpot gave it a 6.6/10 by Greg Mueller, he goes on to say that while it is fun for the "first few hours" and has "Fast-paced gameplay" the game action "gets old quickly" and has a very short story mode.[25] IGN gave the game a good score of 7.2/10 highlighting its presentation and appeal.[26] Metacritic gave the game a rating of 61/100 based on 10 critic reviews.[27]

Retrieved from "http://en.turkcewiki.org/w/index.php?title=The_Grim_Adventures_of_Billy_%26_Mandy&oldid=941841373"
This website is a mirror of Wikipedia, and is not affiliated with the Wikimedia Foundation.
Categories:
Hidden categories: