Thaana, Taana or Tāna ( ތާނަ‎ in Thaana script) is the present writing system of the Maldivian language spoken in the Maldives. Thaana has characteristics of both an abugida (diacritic, vowel-killer strokes) and a true alphabet (all vowels are written), with consonants derived from indigenous and Arabic numerals, and vowels derived from the vowel diacritics of the Arabic abjad. Maldivian orthography in Thaana is largely phonemic.

The Thaana script first appeared in a Maldivian document towards the beginning of the 18th century in a crude initial form known as Gabulhi Thaana which was written scripta continua. This early script slowly developed, its characters slanting 45 degrees, becoming more graceful and adding spaces between words. As time went by it gradually replaced the older Dhives Akuru alphabet. The oldest written sample of the Thaana script is found in the island of Kanditheemu in Northern Miladhunmadulu Atoll. It is inscribed on the door posts of the main Hukuru Miskiy (Friday mosque) of the island and dates back to 1008 AH (AD 1599) and 1020 AH (AD 1611) when the roof of the building was built and then renewed during the reigns of Ibrahim Kalaafaan (Sultan Ibrahim III) and Hussain Faamuladeyri Kilege (Sultan Hussain II) respectively.

Thaana, like Arabic, is written right to left. It indicates vowels with diacritic marks derived from Arabic. Each letter must carry either a vowel or a sukun (which indicates "no vowel"). The only exception to this rule is nūnu which, when written without a diacritic, indicates prenasalization of a following stop.

The vowel or diacritical signs are called fili in Maldivian; there are five fili for short vowels (a, i, u, e, o), where the first two look identical to the Arabic vowel signs (fatha and kasra) and the third one (damma) looks somewhat similar. Long vowels (ā, ē, ī, ō and ū) are denoted by doubled fili (except ō, which is a modification of the short obofili). 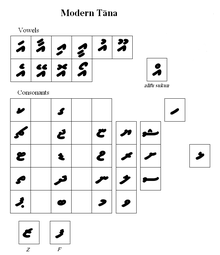 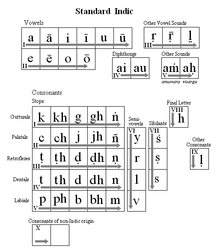 Standard Indic. This table is provided as a reference for the position of the letters in the Thaana table.

The letter alifu has no sound value of its own and is used for three different purposes: It can act as a carrier for a vowel with no preceding consonant, that is, a word-initial vowel or the second part of a diphthong; when it carries a sukun, it indicates gemination (lengthening) of the following consonant; and if alifu+sukun occurs at the end of a word, it indicates that the word ends in /eh/. Gemination of nasals, however, is indicated by nūnu+sukun preceding the nasal to be geminated.

The origins of Thaana are unique among the world's alphabets: The first nine letters (h–v) are derived from the Arabic numerals, whereas the next nine (m–d) were the local Indic numerals. (See Hindu-Arabic numerals.) The remaining letters for loanwords (z–ch) and Arabic transliteration are derived from phonetically similar native consonants by means of diacritics, with the exception of y, which is of unknown origin. This means that Thaana is one of the few alphabets not derived graphically from the original Semitic alphabet—unless the Indic numerals were (see Brahmi numerals). (The Ogham script of Ireland is another example, which also has some relation to numbers, since most of its letters are differentiated from others in a way similar to tally marks.)

The order of the Thaana alphabet (hā, shaviyani, nūnu, rā, bā, etc.) doesn't follow the order of other Indic scripts or of the Arabic script. There is no apparent logic to the order; this has been interpreted as suggesting that the script was scrambled to keep it secret from average islanders. The script was originally used primarily to write magical (fadinta) incantations. These included Arabic quotations, written from right to left. Maldivian learned men, who were all well versed in sorcery, saw the advantages of writing in this simplified hidden script, and Thaana was gradually adopted for everyday use.[1]

Thaana nearly disappeared for a brief period in recent history. Towards the mid-1970s, during President Ibrahim Nasir's tenure, Telex machines were introduced by the Maldivian Government in the local administration. The new telex equipment was viewed as a great progress, but Thaana was deemed to be an obstacle because messages on the telex machines could only be written in the Latin script. Following this, a rough Latin transliteration for Maldivian was officially approved by the Maldivian government in 1976 and was quickly implemented by the administration. Booklets were printed and dispatched to all Atoll and Island Offices, as well as schools and merchant liners. This was seen by many as the demise of the Thaana script.

This official Latin script (Maldivian Latin) made use of "h"s to mark dental consonants rather than aspiration, which inconsistent with the usual transliteration of Indic languages. It also used certain combinations of letters and apostrophes for some Arabic sounds which effectively ignored the Arabic transliterations accepted in academic circles worldwide. The long vowel spellings "oo", "ee", and "oa" were introduced from English, reminiscent of colonial transcriptions.

Clarence Maloney, the American anthropologist who was in the Maldives at the time of the change, lamented the crude inconsistencies of the Maldivian Latin and wondered why modern Standard Indic transliteration had not been considered.[2]

The Thaana script was reinstated by President Maumoon Abdul Gayoom shortly after he took power in 1978, although the Latin transcription of 1976 continues to be widely used.

For a sample text, see the article on Qaumii salaam, the Maldives' national anthem.

Even though it is not part of the alphabet, Arabic ligature Allah ﷲ is used for writing names in Thaana, for example އަބްދުﷲ‎ (Abdullah).

Transliteration of the name[edit]

H. C. P. Bell, the first serious researcher of Maldivian documents, used the spelling Tāna, as the initial consonant is unaspirated. The spelling Thaana was adopted in the mid-1970s, when the government of the Maldives embarked on a short period of Romanization; /t/ was transcribed ⟨th⟩, as ⟨t⟩ was used for the retroflex sound (see Gair & Cain in Daniels & Bright 1996:565).

Disappearance of the letter naviyani[edit]

Naviyani ޱ represents the retroflex "n" ([ɳ]) common to many Languages of India. However this letter was abolished from Maldivian official documents around 1953.

The letter's former position in the Maldivian alphabet was the sixteenth, between Gaafu and Seenu, instead of Nyaviyani (ޏ). Former position of Nyaviyani (ޏ) was 22nd. It is still seen in reprints of old books like the Bodu Tartheebu, and it is used by the people of Addu Atoll and Fuvahmulah when writing songs or poetry in their dialects as the sound is still present in their spoken language.

Thaana was added to the Unicode Standard in September, 1999 with the release of version 3.0.

Retrieved from "http://en.turkcewiki.org/w/index.php?title=Thaana&oldid=947867158"
This website is a mirror of Wikipedia, and is not affiliated with the Wikimedia Foundation.
Categories:
Hidden categories: