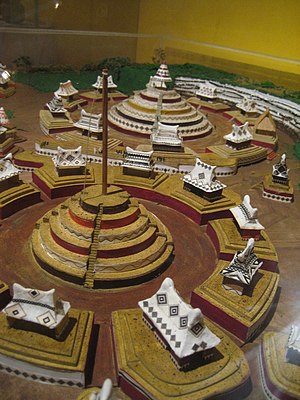 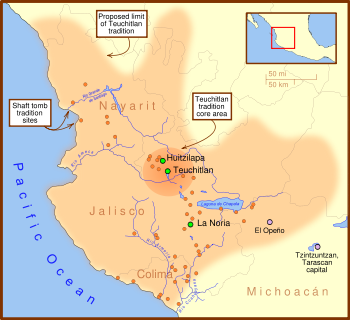 Western Mexico and the Teuchitlan tradition

The Teuchitlan tradition is notable for its circular central plazas and conical step pyramids. According to researcher Phil Weigand, these unusual structures are "unique in the Mesoamerican architectural repertoire and indeed are not found anywhere else in the world".[3]

The Teuchitlan tradition is an outgrowth of the earlier shaft tomb tradition, but with a shift away from the smaller centers to larger sites such Los Guachimontones.[4]

The Guachimontones archaeological site, just outside modern-day Teuchitlán, Jalisco, is the largest and most complex site within the Teuchitlan tradition.[5] The center of the ancient village was occupied by three circular areas, each of with a multi-level circular step pyramid at its center. There are a total of 10 such "Circles" within Teuchitlan, along with four rectangular plazas and two ballcourts among many other smaller structures.[6]

The circular pyramids are thought to be cosmograms, representing the mythological structure of the universe, and the circular poles that were set into their center the Mesoamerican world tree. Based on the many ceramic tableaus that have been recovered, it is similarly thought that volador ceremonies were conducted from the pole.[7]

During the 2001 excavations at the Guachimonton site, the excavators reported finding 6 localities with either Capacha or Capacha-like ceramics. Most were unstratified, but 2 were actually stratigraphic in early layers. This made the archaeologists suspect that the precinct must have had a fairly important Early/Middle Formative component.[8]

There are several characteristics of a ranked society present within Teuchitlan tradition societies — the circular plazas, for example, were restricted to the elite.[9] However, based semi-fortified sites excavated in key mountain passes on the edge of the Teuchitlan core area, it is thought that the larger Teuchitlan tradition area was politically fragmented.[10]

The last of the tradition[edit]

The onset of the Postclassic era in western Mexico, as elsewhere in Mesoamerica, was marked by abrupt changes. In roughly 900 CE, the circular pyramids, plazas, and concentric groupings began to be replaced by the more prosaic rectangular architecture[11] – the Teuchitlán tradition had suffered a "total and definitive collapse", a change so abrupt that it has been assumed that it was driven from outside, perhaps by the ascending Tarascan state.[12] 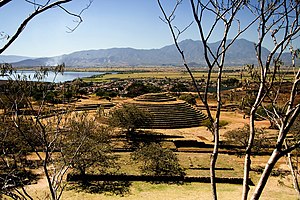 The conical stepped-pyramid at 'Circle 2', Guachimontones

Retrieved from "http://en.turkcewiki.org/w/index.php?title=Teuchitlan_tradition&oldid=846258682"
This website is a mirror of Wikipedia, and is not affiliated with the Wikimedia Foundation.
Categories:
Hidden categories: