TK Maxx[a] is a subsidiary of the American apparel and home goods company TJX Companies based in Framingham, Massachusetts. It uses a slightly different name from that of the TJ Maxx stores in the United States, to avoid confusion with the British retailer T. J. Hughes.

TK Maxx stores operate throughout the United Kingdom, Australia, Ireland, Germany, Poland, Austria and the Netherlands, totalling 515 stores in Europe (up from 407 in December 2014) and thirty five in Australia in April 2017. [3] In Poland, there are a total of 44 stores. 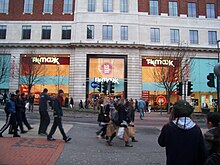 TK Maxx on The Headrow in Leeds 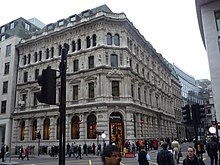 HomeSense and TK Maxx joint store in the MetroCentre, Gateshead

In 1976, TJ Maxx was founded in Framingham, Massachusetts, United States, by Bernard Cammarata. The first international store opened in Bristol in 1994.[4] The company modified the name to TK Maxx to avoid confusion with the established British retail chain T. J. Hughes (which is not affiliated with TJX).[5]

In 2007, TK Maxx began winding down new store openings within the United Kingdom. Focus was given to revamping older inner city stores, or relocating them. This decision led to the creation of Maxx Maxx, moving from a budget reputation into a large department store format with a wider product range.[citation needed]

Opening of stores in the Netherlands between 1999 and 2001 was not as successful as the company wished.[citation needed] The first store in Germany opened on October 4, 2007, in Lübeck.[6]

In August 2008, TK Maxx opened a store on Kensington High Street, London, England, its first central London store, on a site formerly occupied by Habitat.[7] In the following year, TK Maxx became locked in a dispute over its plans to open a store at Piccadilly Circus, London. It had signed an agreement in February 2009 to occupy a 20,000-square-foot (1,858 m2) unit, formerly used by Virgin Megastores and later Zavvi, with a £1.55 million a year rent.[8]

The freehold to the land is owned by the Crown Estate which had the final decision over allowing the company to move into the unit. The Crown Estate rejected the plans, saying that it did not fit in with the strategy it had for the site, which was meant to give the area an upmarket appeal.[9]

The decision was met with condemnation from publicist Max Clifford, who launched a campaign in conjunction with Look to persuade the Crown Estate to allow the store to open in the unit.[10] A court appeal by TK Maxx against the decision failed;[11] Dutch retailer The Sting took the building as their first store in the United Kingdom.[12]

In March 2009, the TK Maxx e-commerce site was launched, initially selling only handbags, but later also selling other accessories.[13] In October 2015, the first Dutch store opened in Eindhoven. Followed by two more stores in Groningen and Rotterdam.

In April 2017, the brand was launched in Australia, when it took over the thirty five Trade Secret discount department stores. The stores opened in April in Brisbane, Sydney and Melbourne with stores in Cairns, Townsville, Toowoomba, Newcastle, Wollongong, Canberra, Albury, the Sunshine Coast and the Gold Coast by the end of May.[14] In November 2018, a mass brawl between hostile extended families took place in Osnabrück.[15]

At the time, shops usually provided free carrier bags; since 2015 a charge, usually donated to charity, is required by law throughout the United Kingdom. Since 2004, TK Maxx has held a Christmas card recycling scheme in conjunction with the Trust.[18] TK Maxx also runs a 'Give Up Clothes For Good' campaign, where customers are encouraged to bring in unwanted clothes for Cancer Research UK.[19][20]

Retrieved from "http://en.turkcewiki.org/w/index.php?title=TK_Maxx&oldid=965639749"
This website is a mirror of Wikipedia, and is not affiliated with the Wikimedia Foundation.
Categories:
Hidden categories: