The Syrian wild ass (Equus hemionus hemippus), less commonly known as a hemippe,[2] an achdari, or a Mesopotamian or Syrian onager,[3] is an extinct subspecies of onager native to the Arabian peninsula. It ranged across present-day Iraq, Palestine, Israel, Jordan, Saudi Arabia, Syria and Turkey.

The Syrian wild ass, only one metre high at its shoulder,[4] was the smallest form of Equidae and could not be domesticated.[5] Its coloring changed with the seasons—a tawny olive coat for the summer months and pale sandy yellow for the winter.[4][6] It was known, like other onagers, to be untameable, and was compared to a thoroughbred horse for its beauty and strength.[5] 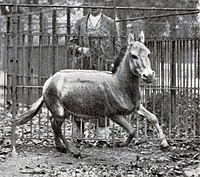 The Syrian wild ass was a grazer. It fed on grass, herbs, leaves, shrubs and tree branches.

European travelers in the Middle East during the 15th and 16th centuries reported seeing large herds.[9] However, its numbers began to drop precipitously during the 18th and 19th centuries due to overhunting, and its existence was further imperiled by the regional upheaval of World War I. The last known wild specimen was fatally shot in 1927 at al Ghams near the Azraq oasis in Jordan, and the last captive specimen died the same year at the Tiergarten Schönbrunn, in Vienna.[10]

After the extinction of the Syrian wild ass, the Persian onager from Iran was chosen as the appropriate subspecies to replace the extinct onagers in the Middle East. The Persian onager was then introduced to the protected areas of Saudi Arabia and Jordan. It was also reintroduced, along with the Turkmenian kulan, to Israel, where they both reproduce wild ass hybrids in the Negev Mountains and the Yotvata Hai-Bar Nature Reserve.

Retrieved from "http://en.turkcewiki.org/w/index.php?title=Syrian_wild_ass&oldid=945151376"
This website is a mirror of Wikipedia, and is not affiliated with the Wikimedia Foundation.
Categories:
Hidden categories: