Sydney Brenner CH FRS FMedSci MAE (13 January 1927 – 5 April 2019)[15] was a South African biologist. In 2002, he shared the Nobel Prize in Physiology or Medicine with H. Robert Horvitz and Sir John E. Sulston.[1] Brenner made significant contributions to work on the genetic code, and other areas of molecular biology while working in the Medical Research Council (MRC) Laboratory of Molecular Biology in Cambridge, England. He established the roundworm Caenorhabditis elegans as a model organism for the investigation of developmental biology,[2][16] and founded the Molecular Sciences Institute in Berkeley, California, United States.[17][18][19][20][21][22][23][24]

Brenner was born in the town of Germiston in the then Transvaal (today in Gauteng), South Africa, on 13 January 1927.[4] His parents, Leah[25] (née Blecher) and Morris Brenner, were Jewish immigrants. His father, a cobbler, came to South Africa from Lithuania in 1910, and his mother from Riga, Latvia, in 1922. He had one sibling, a sister, Phyllis.[26][27]

He was educated at Germiston High School[4] and the University of the Witwatersrand. Having joined university at the age of 15, it was noted during his second year that he would be too young to qualify for the practice of medicine at the conclusion of his six-year medical course, and he was therefore allowed to complete a Bachelor of Science degree in Anatomy and Physiology. He stayed on for two more years doing an Honours degree and then an MSc degree, supporting himself by working part-time as a laboratory technician. During this time he was taught by Joel Mandelstam, Raymond Dart and Robert Broom. His master thesis was in the field of cytogenetics. In 1951 he received the Bachelor of Medicine, Bachelor of Surgery (MBBCh) degree.[26]

Brenner received an 1851 Exhibition Scholarship from the Royal Commission for the Exhibition of 1851 which enabled him to complete a Doctor of Philosophy (DPhil)[11] degree at the University of Oxford as a postgraduate student of Exeter College, Oxford, supervised by Cyril Hinshelwood.[28]

Following his DPhil, Brenner did postdoctoral research at the University of California, Berkeley.[29] He spent the next 20 years at the Laboratory of Molecular Biology[30] in Cambridge. There, during the 1960s, he contributed to molecular biology, then an emerging field. In 1976 he joined the Salk Institute in California.[4]

Together with Jack Dunitz, Dorothy Hodgkin, Leslie Orgel, and Beryl M. Oughton, he was one of the first people in April 1953 to see the model of the structure of DNA, constructed by Francis Crick and James Watson; at the time he and the other scientists were working at the University of Oxford's Chemistry Department. All were impressed by the new DNA model, especially Brenner who subsequently worked with Crick in the Cavendish Laboratory at the University of Cambridge and the newly opened Medical Research Council (MRC) Laboratory of Molecular Biology (LMB). According to the late Beryl Oughton, later Rimmer, they all travelled together in two cars once Dorothy Hodgkin announced to them that they were off to Cambridge to see the model of the structure of DNA.[31]

Brenner made several seminal contributions to the emerging field of molecular biology in the 1960s (see Phage group). The first was to prove that all overlapping genetic coding sequences were impossible. This insight separated the coding function from structural constraints as proposed in a clever code by George Gamow. This led Francis Crick to propose the concept of the adaptor or as it is now known "transfer RNA (tRNA)". The physical separation between the anticodon and the amino acid on a tRNA is the basis for the unidirectional flow of information in coded biological systems. This is commonly known as the central dogma of molecular biology i.e. that information flows from nucleic acid to protein and never from protein to nucleic acid. Following this adaptor insight, Brenner proposed the concept of a messenger RNA, based on correctly interpreting the work of Elliot "Ken" Volkin and Larry Astrachan.[32] Then, with Francis Crick, Leslie Barnett and Richard J. Watts-Tobin, Brenner genetically demonstrated the triplet nature of the code of protein translation through the Crick, Brenner, Barnett, Watts-Tobin et al. experiment of 1961,[33] which discovered frameshift mutations. This insight provided early elucidation of the nature of the genetic code. Leslie Barnett helped set up Sydney Brenner's laboratory in Singapore, many years later.[34][35] 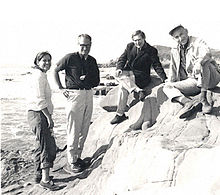 Brenner, with George Pieczenik,[36] created the first computer matrix analysis of nucleic acids using TRAC, which Brenner continued to use. Crick, Brenner, Klug and Pieczenik returned to their early work on deciphering the genetic code with a pioneering paper on the origin of protein synthesis, where constraints on mRNA and tRNA co-evolved allowing for a five-base interaction with a flip of the anticodon loop, and thereby creating a triplet code translating system without requiring a ribosome. This model requires a partially overlapping code.[37] The published scientific paper is extremely rare in that its collaborators include three authors who independently became Nobel laureates.[38]

Brenner then focused on establishing Caenorhabditis elegans as a model organism for the investigation of animal development including neural development. Brenner chose this 1-millimeter-long soil roundworm mainly because it is simple, is easy to grow in bulk populations, and turned out to be quite convenient for genetic analysis. One of the key methods for identifying important function genes was the screen for roundworms that had some functional defect, such as being uncoordinated, leading to the identification of new sets of proteins, such as the set of UNC proteins. For this work, he shared the 2002 Nobel Prize in Physiology or Medicine with H. Robert Horvitz and John Sulston. The title of his Nobel lecture on December 2002, "Nature's Gift to Science", is a homage to this nematode; in it, he considered that having chosen the right organism turned out to be as important as having addressed the right problems to work on.[39] In fact, the C. elegans community has grown rapidly in recent decades with researchers working on a wide spectrum of problems.[40]

Brenner founded the Molecular Sciences Institute in Berkeley, California in 1996.[8] As of 2015[update] he was associated with the Salk Institute, the Institute of Molecular and Cell Biology, the Singapore Biomedical Research Council, the Janelia Farm Research Campus, and the Howard Hughes Medical Institute.[8] In August 2005, Brenner was appointed president of the Okinawa Institute of Science and Technology.[41] He was also on the Board of Scientific Governors at The Scripps Research Institute,[42] as well as being Professor of Genetics there.[7] A scientific biography of Brenner was written by Errol Friedberg in the US, for publication by Cold Spring Harbor Laboratory Press in 2010.[20]

Known for his penetrating scientific insight and acerbic wit, Brenner, for many years, authored a regular column ("Loose Ends") in the journal Current Biology.[43][44] This column was so popular that "Loose ends from Current Biology", a compilation, was published by Current Biology Ltd.[45] and became a collectors' item. Brenner wrote "A Life In Science",[46] a paperback published by BioMed Central. Brenner is also noted for his generosity with ideas and the great number of students and colleagues his ideas have stimulated.[47][48][49][50]

In 2017, Brenner co-organized a seminal lecture series in Singapore describing ten logarithmic scales of time from the Big Bang to the present, spanning the appearance of multicellular life forms, the evolution of humans, and the emergence of language, culture and technology.[51] Prominent scientists and thinkers, including W. Brian Arthur, Svante Pääbo, Helga Nowotny and Jack Szostak, spoke during the lecture series. In 2018, the lectures were adapted into a popular science book titled Sydney Brenner’s 10-on-10: The Chronicles of Evolution, published by Wildtype Books.[52]

Brenner also gave four lectures on the history of Molecular Biology, its impact on Neuroscience and the great scientific questions that lie ahead.[53] The lectures were adapted into the book, In the Spirit of Science: Lectures by Sydney Brenner on DNA, Worms and Brains.[54]

The "American plan" and "European Plan" were proposed by Sydney Brenner as competing models for the way brain cells determine their neural functions.[17][55][56] According to the European plan (sometimes referred to as the British plan), the function of cells is determined by its genetic lineage. According to the American plan, a cell's function is determined by the function of its neighbours after cell migration. Further research has shown that most species follow some combination of these methods, albeit in varying degrees, to transfer information to new cells.[57][58]

Brenner was married to May Brenner (née Covitz, subsequently Balkind)[4] from December 1952 until her death in January 2010;[4] their children include Belinda, Carla, Stefan, and his stepson Jonathan Balkind from his wife's first marriage to Marcus Balkind. He lived in Ely, Cambridgeshire.[68][69] He was an atheist.[70]

Retrieved from "http://en.turkcewiki.org/w/index.php?title=Sydney_Brenner&oldid=965844623"
This website is a mirror of Wikipedia, and is not affiliated with the Wikimedia Foundation.
Categories:
Hidden categories: