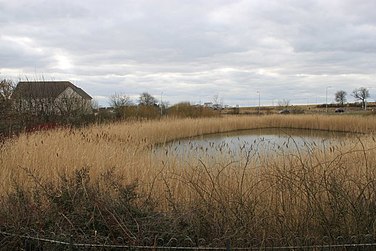 Retention ponds such as this one in Dunfermline, Scotland are considered components of a sustainable drainage system. 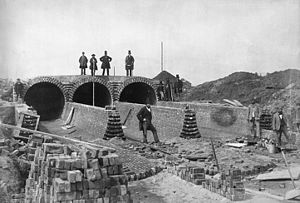 London Sewage system being built in 1860

Modern drainage systems did not appear until the 19th century in Western Europe, although most of these systems were primarily built to deal with sewage issues rising from rapid urbanization. One such example is that of the London sewerage system, which was constructed to combat massive contamination of the River Thames. At the time, the River Thames was the primary component of London's drainage system, with human waste concentrating in the waters adjacent to the densely populated urban center. As a result, several epidemics plagued London's residents and even members of Parliament, including events known as the 1854 Broad Street cholera outbreak and the Great Stink of 1858.[10] The concern for public health and quality of life launched several initiatives, which ultimately led to the creation of London's modern sewerage system designed by Joseph Bazalgette.[11] This new system explicitly aimed to ensure waste water was redirected as far away from water supply sources as possible in order to reduce the threat of waterborne pathogens. Since then, most urban drainage systems have aimed for similar goals of preventing public health crises.

Within past decades, as climate change and urban flooding have become increasingly urgent challenges, drainage systems designed specifically for environmental sustainability have become more popular in both academia and practice. The first sustainable drainage system to utilize a full management train including source control in the UK was the Oxford services motorway station designed by SuDS specialists Robert Bray Associates[12] Originally the term SUDS described the UK approach to sustainable urban drainage systems. These developments may not necessarily be in "urban" areas, and thus the "urban" part of SuDS is now usually dropped to reduce confusion. Other countries have similar approaches in place using a different terminology such as best management practice (BMP) and low-impact development in the United States,[13] water-sensitive urban design (WSUD) in Australia,[14] low impact urban design and development (LIUDD) in New Zealand,[15] and comprehensive urban river basin management in Japan.[14]

Traditional urban drainage systems are limited by various factors including volume capacity, damage or blockage from debris and contamination of drinking water. Many of these issues are addressed by SuDS systems by bypassing traditional drainage systems altogether and returning rainwater to natural water sources or streams as soon as possible. Increasing urbanisation has caused problems with increased flash flooding after sudden rain. As areas of vegetation are replaced by concrete, asphalt, or roofed structures, leading to impervious surfaces, the area loses its ability to absorb rainwater. This rain is instead directed into surface water drainage systems, often overloading them and causing floods.

The goal of all sustainable drainage systems is to use rainfall to recharge the water sources of a given site. These water sources are often underlying the water table, nearby streams, lakes, or other similar freshwater sources. For example, if a site is above an unconsolidated aquifer, then SuDS will aim to direct all rain that falls on the surface layer into the underground aquifer as quickly as possible. To accomplish this, SuDS use various forms of permeable layers to ensure the water is not captured or redirected to another location. Often these layers include soil and vegetation, though they can also be artificial materials.

The paradigm of SuDS solutions should be that of a system that is easy to manage, requiring little or no energy input (except from environmental sources such as sunlight, etc.), resilient to use, and being environmentally as well as aesthetically attractive. Examples of this type of system are basins (shallow landscape depressions that are dry most of the time when it's not raining), rain gardens (shallow landscape depressions with shrub or herbaceous planting), swales (shallow normally-dry, wide-based ditches), filter drains (gravel filled trench drain), bioretention basins (shallow depressions with gravel and/or sand filtration layers beneath the growing medium), reed beds and other wetland habitats that collect, store, and filter dirty water along with providing a habitat for wildlife.

A common misconception of SuDS is that they reduce flooding on the development site. In fact the SuDS is designed to reduce the impact that the surface water drainage system of one site has on other sites. For instance, sewer flooding is a problem in many places. Paving or building over land can result in flash flooding. This happens when flows entering a sewer exceed its capacity and it overflows. The SuDS system aims to minimise or eliminate discharges from the site, thus reducing the impact, the idea being that if all development sites incorporated SuDS then urban sewer flooding would be less of a problem. Unlike traditional urban stormwater drainage systems, SuDS can also help to protect and enhance ground water quality.

Because SuDS describe a collection of systems with similar components or goals, there is a large crossover between SuDS and other terminologies dealing with sustainable urban development.[16] The following are examples generally accepted as components in a SuDS system: 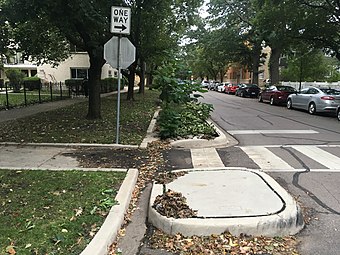 A bioswale is a shallow depression in a piece of land meant to gather and filter stormwater runoff by directing polluted rainwater through soil and vegetation. Besides the environmental benefits bioswales provide, they are commonly used in public spaces due to their aesthetic qualities and generally low difficulty of installation and maintenance.[17] Bioswales are designed linearly and slightly sloped in order to drain water throughout its components and into the soil as opposed to simply collecting it in a standing location.[18] Although bioswales provide passive means to filter runoff indefinitely, they are limited by their momentary capacity for runoff volume. As such, they can be easily flooded over if rainfall events, adjacent surfaces, and soil characteristics are not adequately considered.

Bioswales are found in various settings across the globe, particularly in densely built urban areas with paved streets. In Nashville, Tennessee, a renovation of historic Deaderick Street near the city center included bioswales meant to filter runoff from the street surfaces. Its developers claim that the intervention has reduced the amount of runoff entering Nashville's sewer system by over 1.2 million gallons annually.[19]

Permeable pavement systems aim to provide a manner for water that falls on hardscaping to seep through to the soil below. This is accomplished by either dividing traditional pavement materials into sections, or using a porous pavement material.

In China, paved urban areas have grown rapidly since the 2000s, with dozens of cities supporting populations over one million. In response, the Chinese government has commissioned the design of several "sponge cities" which employ SuDS at urban scales throughout the country.[20] One such example is Nanhui, a Shanghai suburb designed to combat rising sea levels on China’s eastern coast. Nanhui, previously known as Lingang, uses permeable pavement for roads and public right-of-ways to reduce the effects large urban infrastructure has on the natural water cycle.[21] It is the organic combination of modern green new technology and society, environment, human culture for social progress.[22]

Wetlands can be used to concentrate large volumes of runoff from urban areas and neighborhoods. In 2012, the South Los Angeles Wetlands Park was constructed in a densely populated inner-city district as a renovation for a former LA Metro bus yard. The park is designed to capture runoff from surrounding surfaces as well as storm water overflow from the city's current drainage system.[24] 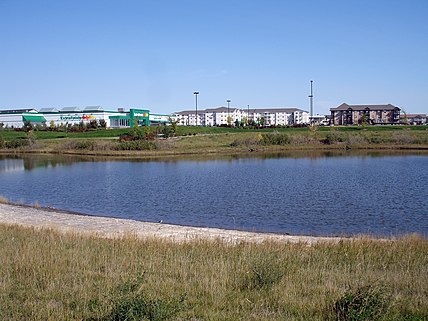 Xang Thoi Pond in Cần Thơ, Vietnam, is an example of urban retrofitting to reduce flooding through detention basins. Cần Thơ, a large city on the Mekong Delta, is susceptible to seasonal floods and intense rainfall. In response, the local government included urban flooding solutions as part of a wider national infrastructural initiative.[25]

Green roofs are landscaped or vegetated areas on the roofs of buildings, usually built to mimic natural landscaping or ground-level parks. Green roofs help drainage systems by offsetting peak discharge from otherwise hardscape surfaces, and filtering rainwater directly as it falls. They also have the added advantage of reducing energy consumption for buildings that would otherwise be receiving direct sunlight onto their roofs throughout the day.[26]

As part of the 2015 United Nations Climate Change Conference, Argentina agreed to reduce greenhouse gas emissions as part of a global effort to combat climate change. Consequentially, many of Argentina's cities have passed resolutions requiring or encouraging new developments to implement green roofs. In Buenos Aires, the city government provides tax reductions to developments that incorporate green roofs along with other LEED criteria.

Retrieved from "http://en.turkcewiki.org/w/index.php?title=Sustainable_drainage_system&oldid=1006316502"
This website is a mirror of Wikipedia, and is not affiliated with the Wikimedia Foundation.
Categories:
Hidden categories: