The phrase sustainable industries is related to the development of industrial processes in a sustainable way. 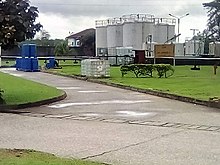 Soon after, a study entitled “Jobs in a Sustainable Economy” by Michael Renner of the Worldwatch Institute was published, using the term "sustainable industries".[2] This 1991 report concluded, "Contrary to the jobs-versus-owls rhetoric that blames environmental restrictions for layoffs, the movement toward an environmentally sustainable global economy will create far more jobs than it eliminates. The chief reason: non-polluting, environmentally sustainable industries tend to be intrinsically more labour intensive and less resource intensive than traditional processes." Among the features of sustainable industry offered in the paper were energy efficiency, resource conservation to meet the needs of future generations, safe and skill-enhancing working conditions, low waste production processes, and the use of safe and environmentally compatible materials. Some of the benefits, however, would be offset by higher prices (due to labor costs) and a theoretically larger population needed to perform the same amount of work, increasing the agricultural and other loads on the system.

Retrieved from "http://en.turkcewiki.org/w/index.php?title=Sustainable_industries&oldid=998864224"
This website is a mirror of Wikipedia, and is not affiliated with the Wikimedia Foundation.
Categories:
Hidden categories: