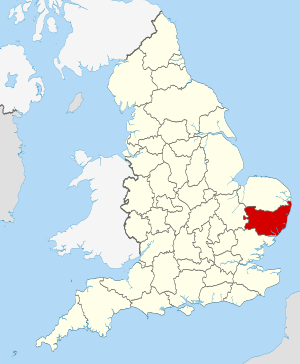 Location of Suffolk within England

The Suffolk dialect is a dialect spoken in the East Anglian county of Suffolk, England. Like many English dialects, it is rapidly disappearing, due to the advent of increasing social and geographical mobility and the influence of the media. Despite this, there are still many people who profess some knowledge of Suffolk dialect, and there is an increasing number of young speakers who have a distinctive Suffolk accent, if not a dialect.

This dialect has several characteristics which are closely related to Norfolk dialect neighbouring in the north, yet it retains many specific and unique terms and phrases which are distinctively recognisable. A closely related accent called the Essex dialect can still be heard in the speech of older people in Colchester and its surrounding towns in the northern parts of its corresponding county, where it has not yet quite been displaced by Estuary English or Cockney.

Epenthesis occurs occasionally in Suffok dialect, as it does in Norfolk dialect. Words like "film" become "filum".

Suffolk dialect is non-rhotic, i.e. the 'r' in "hard" and similar words is not pronounced, unlike West Country English.

Suffolk dialect has a strong use of the glottal stop. This is shown in words like "'amara" and "e'" ('tomorrow' and 'it').

It is common for "that" to replace "it".

The intonation of words in Suffolk is very peculiar. Words have a notable range of rise and fall in pitch and can often sound as if the speaker were asking a question. This is one of the main features that distinguish Suffolk speech from Norfolk, which is characterised by a distinctive 'drawl'.

Verbs very rarely conjugate, the only exceptions being 'to be' and 'to have'. Other verbs do not conjugate whatsoever, and the present and perfect tense is often the same, and context is used. This is shown in "Ee say he goo down-a poost arfice" for "he said he went to the post office".

Retrieved from "http://en.turkcewiki.org/w/index.php?title=Suffolk_dialect&oldid=971645072"
This website is a mirror of Wikipedia, and is not affiliated with the Wikimedia Foundation.
Categories:
Hidden categories: