Jump to navigation Jump to search
Not to be confused with Substratum. 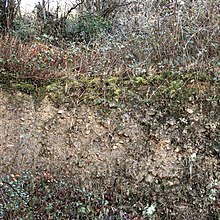 Subsoil is the layer of soil under the topsoil on the surface of the ground. Like topsoil, it is composed of a variable mixture of small particles such as sand, silt and clay, but with a much lower percentage of organic matter and humus. Below the subsoil is the substratum, which can be residual bedrock, sediments, or aeolian deposits. As it is lacking in dark humus, subsoil is usually paler in color than the overlying topsoil. It may contain the deeper roots of some plants, such as trees, but a majority of plant roots lie within the topsoil.

Clay-based subsoil has been the primary source of material for adobe, cob, rammed earth, wattle and daub, and other earthen construction methods for millennia. Coarse sand, the other ingredient in most of these materials, is also found in subsoil.

Although by no means sterile, subsoil is relatively barren in terms of soil organisms compared to humus-rich topsoil.

Retrieved from "http://en.turkcewiki.org/w/index.php?title=Subsoil&oldid=927590433"
This website is a mirror of Wikipedia, and is not affiliated with the Wikimedia Foundation.
Categories:
Hidden categories: