A common method for determining subgame perfect equilibria in the case of a finite game is backward induction. Here one first considers the last actions of the game and determines which actions the final mover should take in each possible circumstance to maximize his/her utility. One then supposes that the last actor will do these actions, and considers the second to last actions, again choosing those that maximize that actor's utility. This process continues until one reaches the first move of the game. The strategies which remain are the set of all subgame perfect equilibria for finite-horizon extensive games of perfect information.[1] However, backward induction cannot be applied to games of imperfect or incomplete information because this entails cutting through non-singleton information sets.

The ultimatum game provides an intuitive example of a game with fewer subgame perfect equilibria than Nash equilibria.

Determining the subgame perfect equilibrium by using backward induction is shown below in Figure 1. Strategies for Player 1 are given by {Up, Uq, Dp, Dq}, whereas Player 2 has the strategies among {TL, TR, BL, BR}. There are 4 subgames in this example, with 3 proper subgames. 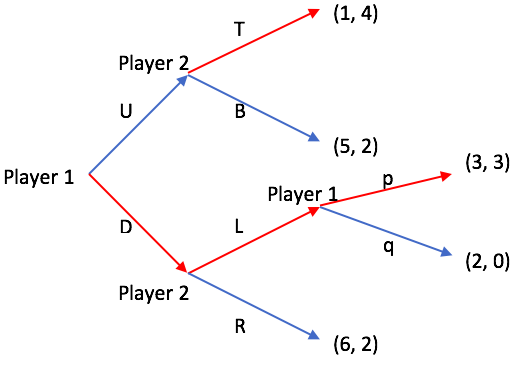 Using the backward induction, the players will take the following actions for each subgame:

An extensive-form game with incomplete information is presented below in Figure 2. Note that the node for Player 1 with actions A and B, and all succeeding actions is a subgame. Player 2's nodes are not a subgame as they are part of the same information set. 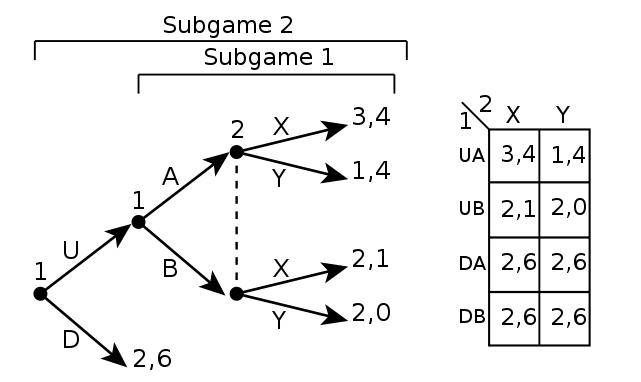 The first normal-form game is the normal form representation of the whole extensive-form game. Based on the provided information, (UA, X), (DA, Y), and (DB, Y) are all Nash equilibria for the entire game.

To solve this game, first find the Nash Equilibria by mutual best response of Subgame 1. Then use backwards induction and plug in (A,X) → (3,4) so that (3,4) become the payoffs for Subgame 2.[3]

The dashed line indicates that player 2 does not know whether player 1 will play A or B in a simultaneous game. 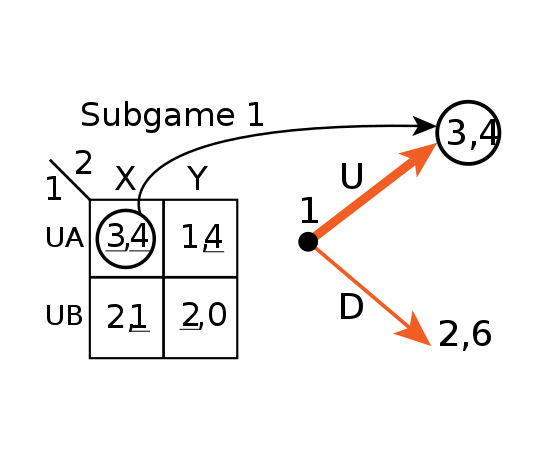 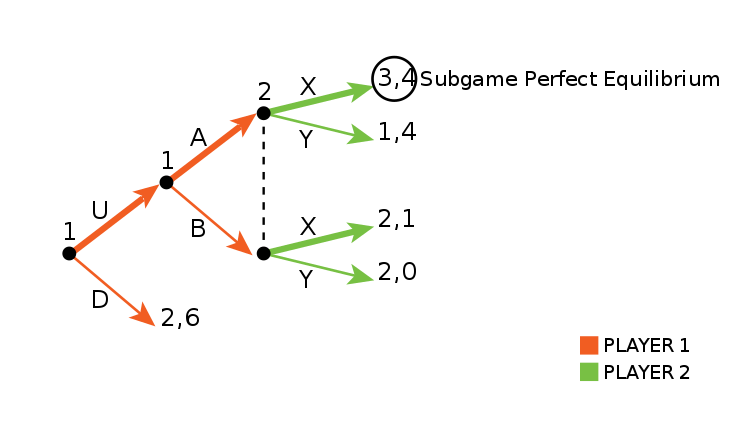 Thus, the subgame perfect equilibrium through backwards induction is (UA, X) with the payoff (3, 4). 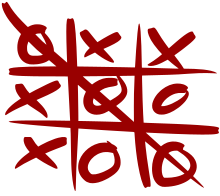 The subgame-perfect Nash equilibrium is normally deduced by "backward induction" from the various ultimate outcomes of the game, eliminating branches which would involve any player making a move that is not credible (because it is not optimal) from that node. One game in which the backward induction solution is well known is tic-tac-toe, but in theory even Go has such an optimum strategy for all players. The problem of the relationship between subgame perfection and backward induction was settled by Kaminski (2019), who proved that a generalized procedure of backward induction produces all subgame perfect equilibria in games that may have infinite length, infinite actions as each information set, and imperfect information if a condition of final support is satisfied.

The interesting aspect of the word "credible" in the preceding paragraph is that taken as a whole (disregarding the irreversibility of reaching sub-games) strategies exist which are superior to subgame perfect strategies, but which are not credible in the sense that a threat to carry them out will harm the player making the threat and prevent that combination of strategies. For instance in the game of "chicken" if one player has the option of ripping the steering wheel from their car they should always take it because it leads to a "sub game" in which their rational opponent is precluded from doing the same thing (and killing them both). The wheel-ripper will always win the game (making his opponent swerve away), and the opponent's threat to suicidally follow suit is not credible.

Retrieved from "http://en.turkcewiki.org/w/index.php?title=Subgame_perfect_equilibrium&oldid=1011266047"
This website is a mirror of Wikipedia, and is not affiliated with the Wikimedia Foundation.
Categories:
Hidden categories: