Draught of Strongbow in a Strongbow brand pint glass

The majority of Strongbow is produced at Bulmer's Hereford plant, although regional variations are also produced at Heineken's cider mill in Belgium and in Australia, where Carlton & United Breweries own the rights to the brand.

Strongbow was launched in England by H.P. Bulmer in 1960.[4] Bulmer named the cider after “one of England’s greatest knights” Richard de Clare, whose nickname "Strongbow" was believed to be derived from his heavy reliance on archers during his campaigns in Ireland.[5] However, this theory is unlikely to be true because de Clare's father, Gilbert de Clare, was originally known as “Strongbow”, which suggests that Richard's nickname was actually inherited from his father.[6] It was initially marketed as "the strong cider for men".[7] By 1970, it was the second-highest selling cider in the world after its Bulmer's stablemate Woodpecker.[citation needed] By 2001, Strongbow was among the top ten drinks by sales in English and Welsh pubs and bars.[8] In 2003 Bulmers was purchased by Scottish & Newcastle, who in turn were taken over by Heineken in 2008. In January 2011, Heineken announced their intention to take the Strongbow brand global.[9]

In the United Kingdom, Strongbow is a blend of bitter-sweet cider and culinary apples, with 50 different varieties of apple used.[10] The apples are grown in England and France. It is mass-produced using modern methods and contains apple concentrate and sugar. It is fermented with a controlled yeast strain, and at least some varieties are flavoured with artificial sweeteners. The Bulmers Strongbow vat is the largest alcoholic container in the world, with a capacity of 1.5 million gallons (6.8 million litres).[11]

Strongbow Gold is the variant available in mainland Europe and is available only in bottles. It was launched in May 2011, and its major markets include Italy and Hungary. It is 5% ABV and designed to be served over ice. It is over 50% apple juice, making it a similar product to Magners and Stella Cidre.[13] It also contains glucose syrup, glucose-fructose syrup, food acidifier: malic acid, anti-oxidant: sulphur dioxide, colouring agent: cochineal, burned sugar.[13] It is made in Belgium at Heineken's Stassen plant. However, the version of Strongbow Gold Apple available in Slovakia contains only 25% apple juice; in that version the colouring is E150a caramel.[14]

Strongbow is exported to numerous overseas markets. Sleeman Breweries took over the distribution rights for Canada in 2001, and is the fifth highest selling cider in the United States, where it was imported by Vermont Hard Cider until August 2012, when Heineken regained the rights.[15] It was launched into the Australian market in 1970, and today still remains as Australia's most popular cider.[16] Strongbow is available in five varieties in Australia: Dry, Sweet, Original (formerly sold as "Draught"), Clear (a low carbohydrate variety) and Pear.[16] Foster's Group purchased the Strongbow brand in Australia in 2003, and continues to produce, distribute & market the brand.[16] They were themselves purchased by SABMiller in 2011 before being bought out by Anheuser-Busch InBev in 2017. Carlton & United Breweries currently have the rights to Strongbow in Australia. 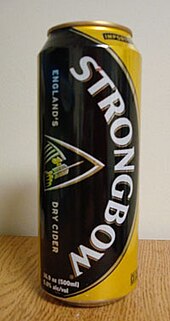 Late 90's briefly gave us Strongbow smooth - carbonated with nitrogen instead of carbon dioxide, so much smaller bubbles and a smooth, creamy texture.

Previously Strongbow White was available in Australia, which had a much higher alcohol content (8.5%). It ceased production sometime after 2000.

Strongbow Sirrus (5% ABV), was launched in summer 2005 to compete with C&C's Magners Original Irish Cider. Sirrus was formulated as a 'smooth' cider designed to be poured over ice, and was only available in bottles; it has since been discontinued.

In 2007, the company began trials of Strongbow On Ice, a competitor to other ciders that are served over ice. This uses a specially designed pump that creates a "head" of ice made from cider on the top of the pint.[25] Trials were unsuccessful however, and the product was discontinued.

Strongbow Black (previously Strongbow Super) at 7.5% ABV, was delisted by Heineken in 2011 on social responsibility grounds.[26]

The original Norman archer logo was designed by artist Barney Bubbles. The "thudding arrows" have been a signature of the brand's television advertising since the 1960s.[27] Towards the end of the advertisement, two arrows thud into a bar counter near a glass of Strongbow, or its bar pump.

Advertisements from 1998 to 2002 featured Johnny Vaughan and the "live to loaf" line.[28] The campaign focused on Vaughan's character, who was always finding new ways to get the most out of life with the minimum effort.[28] Vaughan was credited by Bulmers with giving credibility to the Strongbow brand among the key 18 to 24-year-old group.[28] Between 1998 and 2000 Strongbow sales rose by 30 per cent.[29]

In 2010 TV adverts in the UK were based on the "medal ceremony" scene at the end of the Star Wars Episode IV: A New Hope film: three men walk down an aisle flanked by large numbers of men; step up a raised podium at the far end; and receive a reward – a pint of Strongbow – for their "heroic deeds" (i.e.: performing their ordinary jobs). Adverts in 2012 showed fanciful representations of normal situations (goalkeeping, potting a black ball, best man's speech) where those seen in the advert would be next seen drinking Strongbow having "earnt it" for accomplishing such situations. The latest advert depicts a duplex-style apple orchard divided between bitter and sweet reflecting Strongbow being "bittersweet by nature".

Retrieved from "http://en.turkcewiki.org/w/index.php?title=Strongbow_(cider)&oldid=942956182"
This website is a mirror of Wikipedia, and is not affiliated with the Wikimedia Foundation.
Categories:
Hidden categories: