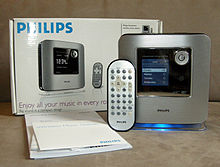 Streamium was a line of IP-enabled entertainment products by Dutch electronics multi-national Philips Consumer Electronics. Streamium products use Wi-Fi to stream multimedia content from desktop computers or Internet-based services to home entertainment devices. A Streamium device plugged into the local home network will be able to see multimedia files that are in different UPnP-enabled computers, PDAs and other networking devices that run UPnP AV MediaServer software.

In all cases, using a computer with RSS receiver together with a UPnP AV MediaServer, it is possible to play back audio/video podcast. Some of the popular feeds include BBC live, Geekbrief, Reuters, Metacafe, YouTube. Although in most cases this video podcaster uses codec formats not supported by Streamium, it's still possible by using software codec transcoders on the PC to convert them to MPEG format.

The FW-i1000, an audio mini-system including a CD-changer and AM/FM radio, and considered to be the precursor to the Streamium product line, first shipped in June 2001. It had been in development by Philips' audio business group in Sunnyvale (CA, USA) since May 2000. At the January 2001 Consumer Electronics Show they announced and demonstrated the first integrated audio device connecting to "over a thousand internet radio stations".
The FW-i1000 was rapidly followed by a slew of other IP-enabled devices. The marketing name "Streamium" and the slogan "Don't dream it, stream-it" was coined and globally registered by Ramon de la Fuente (now at Google) who replaced Tony Cher as a product manager in 2001.

Announced at the same event:

Both the Streamium-TV and MX6000i were capable of offering video content hosted by a web-based service, the precursor of net TV.

as of January 2013 Philips have abandoned the streamium line without explanation.

It seems that the Fidelio line is to fill the gap streamium left. 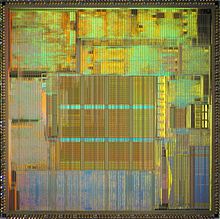 This back-end service allowed Streamium devices to connect to "any number" of web based content delivery services. The back-end would thereby function as a "switch-board" connecting the content delivery services with individual boxes. Moreover, the back-end service would allow Philips to build out an "after-sales" relationship with their customers through the web-based [UI]-extension and would stimulate some early form of web-based social networking with the streamium cafe web site that was set up by Mark Tuttle.

From the start, Streamium-devices contained provisions (i.e. an IEEE EUI-64 containing an OUI and a MAC-address, encryption keys, product and software version codes) used to protect streams and support identification mechanisms, as well as allowing downloading of software upgrades (for bug-fixes as well as enabling new features).

In most cases. Streamium functionality was provided by a module (a [PCB]) based on an NXP TriMedia PNX1300. This module implemented:

1. Connectivity to the home network as well as to the Internet (network stack, SAX as opposed to DOM XML-parser, UPnP-stack)

A user interface extension was available on the Streamium web-site (my.philips.com) that would allow users to manage their preferences, services and devices.

On the frontpanel or through the on-screen display (OSD) of the Streamium devices, users could mark their favorites or indicate they wanted to learn more about the song being played. The service would then send either an e-mail with more details, or post this info on my.philips.com with a click-through link (i.e. to Amazon.com for purchasing).

Under the direction of the Streamium team, Philips CE contributed significantly to both UPnP and Digital Living Network Alliance (DLNA) and other industry efforts.

The Streamiums were extensively used to build advanced concepts, even at other divisions of Philips such as Philips Semiconductors (now NXP Semiconductors), Philips Research and Philips Medical.

Philips Semiconductors would pick up on the vision of Philips Consumer Electronics and task the "advanced system lab" to prototype this vision (first demos end 2004).

Concepts (such as those used in the Connected Home demos) would then be shown by the Streamium team in the "Philips-CE World Tour", an invitation only event at the yearly Consumer Electronics Show in Las Vegas to a selected audience.

The Philips Streamium service partners were:

There was no need to first download files to PC, or even to turn the PC on, to stream multimedia Internet content. (A broadband Internet connection is required.)

A wide array of Yahoo! services including on-demand music videos, movie trailers and clips and photo services was launched together with the Streamium range extension in Spring 2004.[7]

Out of the box consumers would have access to free services. Additionally, a number of services would offer premium (subscription-based) online services allowing consumers to broaden and personalize their home entertainment experience.[8]

In his press conference during the CES2001, Guy Demuynck, then CEO of Philips CE, expressed his vision that the Internet would become as ubiquitous and accessible as the electric grid to devices other than the PC, and that people would increasingly rely on the Internet for information and entertainment.[9]

"The Internet has transformed the way we do business," Demuynck stated, referring not only to communications and promotions but to product design as well. "We intend to put Internet capabilities into many products, making Internet content as accessible as pressing a single button on a TV remote. The Internet dominates all our thinking—it will expand from a browsing activity to an always-on, integral part of daily life," he said.

The early Internet audio and Streamium devices had both constant broadband Internet connectivity and a back-end service provided by Philips to aggregate services for its users. In addition, a UI extension was offered (my.philips) that allowed consumers to manage their devices, external service subscriptions, favorites, as well as to add their own streams. The PC-based UI extension was part of the lean-forward/lean-backward approach to this potentially complicated product range:

In essence, the Philips service offering was a walled garden; but the fact that consumers could add and access their own favorite streams made it more of an open system. Although never published, Streamium relied on an XML-based API—not unlike the APIs we see today published by Web-service providers (YouTube, eBay,...) -- and implemented XML-based APIs as offered by its service providers.

Unfortunately the first Streamium generations lacked support for a number of important media formats such as those included in the Windows Media technologies which hampered their commercial success. Philips' legal team had issues with the non-assertion clause[10] that Microsoft required potential licensees to sign without prior opportunity to check the IP involved. Since Philips did and still does own a substantial patent-portfolio,[11] product management was not allowed to risk signing away rights on a substantial number of important patents.[12]

To some extent consumers were involved in some of the design of the Streamiums. Of course, the classical focus test groups were used to find out what features consumers would deem important. But also after the official announcement, a limited number of pre-production versions of the Streamiums would be made available to a limited number of volunteer beta-testers that could sign up via a Philips web-site.[13]

Retrieved from "http://en.turkcewiki.org/w/index.php?title=Streamium&oldid=923086013"
This website is a mirror of Wikipedia, and is not affiliated with the Wikimedia Foundation.
Categories: