Sterling is a home rule municipality that is the county seat and the most populous city of Logan County, Colorado, United States.[7] The city population was 14,777 at the 2010 census.[8]

Sterling is the largest city in Northeastern Colorado and the county seat of Logan County and the site of the domed Logan County courthouse, built in 1909.

A post office called Sterling has been in operation since 1874.[9] The community was named for Sterling, Illinois, the native home of a railroad official.[10]

Sterling is 128 miles (206 km) northeast of Denver, and is located on Interstate 76, on the 'eastern plains' of northeastern Colorado.

According to the United States Census Bureau, the city has a total area of 6.9 square miles (18 km2), all land.

According to the Köppen Climate Classification system, Sterling has a semi-arid climate, abbreviated "BSk" on climate maps.[11] 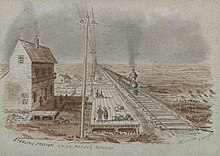 Sterling's Main Street in the 1920s, looking northwest from the railroad tracks.

The original Sterling High School, built in 1909. This building later served as the Sterling Junior High School until the 1980s.

The Blizzard of 1949 near Sterling

Logan County Courthouse in the 1930s 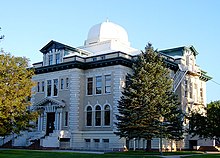 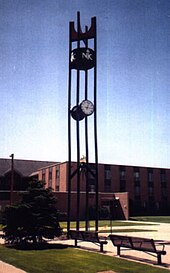 Major employers in Sterling include Northeastern Junior College, the RE-1 Valley School system, and the Sterling Correctional Facility.

Sterling is the major shopping hub for most of northeastern Colorado and hosts stores like Wal-Mart, The Home Depot, Maurices, and The Buckle, as well as many local retailers located primarily on Main Street. Six different banks have branches in Sterling and there are local AM and FM radio stations as well as a local television station, and a long established regional newspaper, the Sterling Journal-Advocate and South Platte Sentinel [1].

The Overland Trail Museum in Sterling

The Colorado Department of Corrections operates the Sterling Correctional Facility in Sterling.[15]

Sterling is the home of Northeastern Junior College, a residential two year college in Colorado.

Sterling is also the location of the RE-1 Valley School District.

Sterling is also served by railroads, although only freight carriers serve the town. The main rail operator is Burlington Northern Santa Fe (BNSF), but other operators, like Union Pacific, serve Sterling as well. The closest Amtrak station is located in Fort Morgan, about 47 miles (76 km) away.

Scheduled bus service is offered by Black Hills Stage Lines with service to Ft. Morgan and Denver in Colorado, as well as number of cities in Nebraska including North Platte, Kearney, and Omaha.

Sterling is a regional center for health care as well, and is the home of the Sterling Regional Medical Center.

Retrieved from "http://en.turkcewiki.org/w/index.php?title=Sterling,_Colorado&oldid=998319969"
This website is a mirror of Wikipedia, and is not affiliated with the Wikimedia Foundation.
Categories:
Hidden categories: