(Redirected from Statistical sample)
Jump to navigation Jump to search
Not to be confused with Sample statistic. 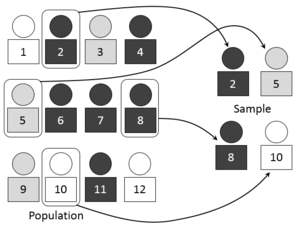 A visual representation of selecting a simple random sample[clarification needed]

In statistics and quantitative research methodology, a sample is a set of individuals or objects collected or selected from a statistical population by a defined procedure.[1] The elements of a sample are known as sample points, sampling units or observations.[citation needed]

Typically, the population is very large, making a census or a complete enumeration of all the individuals in the population either impractical or impossible. The sample usually represents a subset of manageable size. Samples are collected and statistics are calculated from the samples, so that one can make inferences or extrapolations from the sample to the population.

An unbiased (representative) sample is a set of objects chosen from a complete sample using a selection process that does not depend on the properties of the objects.[4] For example, an unbiased sample of Australian men taller than 2 m might consist of a randomly sampled subset of 1% of Australian males taller than 2 m. But one chosen from the electoral register might not be unbiased since, for example, males aged under 18 will not be on the electoral register. In an astronomical context, an unbiased sample might consist of that fraction of a complete sample for which data are available, provided the data availability is not biased by individual source properties.

A sample that is not random is called a non-random sample or a non-probability sampling.[6] Some examples of nonrandom samples are convenience samples, judgment samples, purposive samples, quota samples, snowball samples, and quadrature nodes in quasi-Monte Carlo methods.

In mathematical terms, given a probability distribution F, a random sample of length n (where n may be any positive integer) is a set of realizations of n independent, identically distributed (iid) random variables with distribution F.[7]

A sample concretely represents the results of n experiments in which the same quantity is measured. For example, if we want to estimate the average height of members of a particular population, we measure the heights of n individuals. Each measurement is drawn from the probability distribution F characterizing the population, so each measured height

is the realization of a random variable

is the value obtained when making the measurement.

Retrieved from "http://en.turkcewiki.org/w/index.php?title=Sample_(statistics)&oldid=950806958"
This website is a mirror of Wikipedia, and is not affiliated with the Wikimedia Foundation.
Categories:
Hidden categories: