Since stationarity is an assumption underlying many statistical procedures used in time series analysis, non-stationary data are often transformed to become stationary. The most common cause of violation of stationarity is a trend in the mean, which can be due either to the presence of a unit root or of a deterministic trend. In the former case of a unit root, stochastic shocks have permanent effects, and the process is not mean-reverting. In the latter case of a deterministic trend, the process is called a trend-stationary process, and stochastic shocks have only transitory effects after which the variable tends toward a deterministically evolving (non-constant) mean.

be a stochastic process and let

represent the cumulative distribution function of the unconditional (i.e., with no reference to any particular starting value) joint distribution of

is not a function of time. 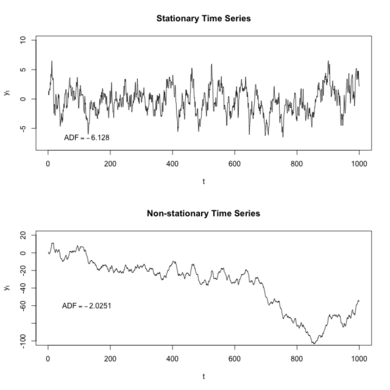 Two simulated time series processes, one stationary and the other non-stationary, are shown above. The augmented Dickey–Fuller (ADF) test statistic is reported for each process; non-stationarity cannot be rejected for the second process at a 5% significance level.

White noise is the simplest example of a stationary process.

An example of a discrete-time stationary process where the sample space is also discrete (so that the random variable may take one of N possible values) is a Bernoulli scheme. Other examples of a discrete-time stationary process with continuous sample space include some autoregressive and moving average processes which are both subsets of the autoregressive moving average model. Models with a non-trivial autoregressive component may be either stationary or non-stationary, depending on the parameter values, and important non-stationary special cases are where unit roots exist in the model.

be any scalar random variable, and define a time-series

is a stationary time series, for which realisations consist of a series of constant values, with a different constant value for each realisation. A law of large numbers does not apply on this case, as the limiting value of an average from a single realisation takes the random value determined by

, rather than taking the expected value of

As a further example of a stationary process for which any single realisation has an apparently noise-free structure, let

have a uniform distribution on

and define the time series

In Eq.2, the distribution of

up to a certain order

A weaker form of stationarity commonly employed in signal processing is known as weak-sense stationarity, wide-sense stationarity (WSS), or covariance stationarity. WSS random processes only require that 1st moment (i.e. the mean) and autocovariance do not vary with respect to time and that the 2nd moment is finite for all times. Any strictly stationary process which has a defined mean and a covariance is also WSS.[3]:p. 299

So, a continuous time random process

which is WSS has the following restrictions on its mean function

The first property implies that the mean function

must be constant. The second property implies that the covariance function depends only on the difference between

and only needs to be indexed by one variable rather than two variables.[2]:p. 159 Thus, instead of writing,

the notation is often abbreviated by the substitution

This also implies that the autocorrelation depends only on

The main advantage of wide-sense stationarity is that it places the time-series in the context of Hilbert spaces. Let H be the Hilbert space generated by {x(t)} (that is, the closure of the set of all linear combinations of these random variables in the Hilbert space of all square-integrable random variables on the given probability space). By the positive definiteness of the autocovariance function, it follows from Bochner's theorem that there exists a positive measure

on the real line such that H is isomorphic to the Hilbert subspace of L2(μ) generated by {e−2πiξ⋅t}. This then gives the following Fourier-type decomposition for a continuous time stationary stochastic process: there exists a stochastic process

with orthogonal increments such that, for all

where the integral on the right-hand side is interpreted in a suitable (Riemann) sense. The same result holds for a discrete-time stationary process, with the spectral measure now defined on the unit circle.

When processing WSS random signals with linear, time-invariant (LTI) filters, it is helpful to think of the correlation function as a linear operator. Since it is a circulant operator (depends only on the difference between the two arguments), its eigenfunctions are the Fourier complex exponentials. Additionally, since the eigenfunctions of LTI operators are also complex exponentials, LTI processing of WSS random signals is highly tractable—all computations can be performed in the frequency domain. Thus, the WSS assumption is widely employed in signal processing algorithms.

In the case where

is a complex stochastic process the autocovariance function is defined as

and, in addition to the requirements in Eq.3, it is required that the pseudo-autocovariance function

depends only on the time lag. In formulas,

The concept of stationarity may be extended to two stochastic processes.

are called jointly strict-sense stationary if their joint cumulative distribution

depends only on the time difference

. This may be summarized as follows:

Relation between types of stationarity[edit]

The terminology used for types of stationarity other than strict stationarity can be rather mixed. Some examples follow.

One way to make some time series stationary is to compute the differences between consecutive observations. This is known as differencing.

Retrieved from "http://en.turkcewiki.org/w/index.php?title=Stationary_process&oldid=967016169"
This website is a mirror of Wikipedia, and is not affiliated with the Wikimedia Foundation.
Categories: