Jump to navigation Jump to search
This article is about the present South African-based bank. For the British overseas bank, now part of Standard Chartered, see Standard Bank (historic).

The bank's origins can be traced to 1862, when a group of businessmen led by the prominent South African politician John Paterson[3][4] formed a bank in London, initially under the name Standard Bank of British South Africa. The bank started operations in 1863 in Port Elizabeth, South Africa, and soon after opening it merged with several other banks including the Commercial Bank of Port Elizabeth, the Colesberg Bank, the British Kaffrarian Bank and the Fauresmith Bank.

It was prominent in financing and development of the diamond fields of Kimberley in 1867. The word "British" was dropped from the title in 1883. When gold was discovered on the Witwatersrand, the bank expanded northwards and on 11 October 1886 the bank started doing business in a tent at Ferreira's Camp (later to be called Johannesburg), thus becoming the first bank to open a branch on the Witwatersrand gold fields. On 1 November 1901 a second branch was opened in Eloff Street of Johannesburg. 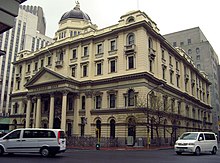 In 1967 shares in the Standard Bank of South Africa were offered to the South African public, although the British parent company retained over 80% of the shares.[5]

The parent bank merged in 1969 with Chartered Bank of India, Australia and China and the combined bank became known as Standard Chartered Bank. In 1969 the Standard Bank Investment Corporation (now Standard Bank Group) was established as the holding company of the South African bank. During the 1970s and 1980s Standard Chartered gradually reduced its shareholding, and sold its remaining 39% stake in Standard Bank Group in 1987, transferring complete ownership of the holding company to South African investors and in particular Liberty Life (and its affiliates), with the latter being the company's major shareholder until 1999.[5]

In March 2019, Standard became the first bank in Africa to shift its operations onto Amazon Web Services.[6]

In March 2019, the bank announced a reduction of 91 branches and 1200 staff. The decision was taken due to a growing use of self-service channels and a branch network becoming less relevant.

In 1992 the bank acquired the operations of ANZ Grindlays Bank in eight African countries. Most of the newly acquired banks were renamed Stanbic Bank, to avoid confusion with the former parent (and now competitor), Standard Chartered. Several more banks in Africa were acquired during the 1990s, and adopted the Stanbic name.[5]

In February 2014, Standard Bank Group is expected to open a representative office in Abidjan, Ivory Coast, marking the entry of the banking conglomerate into Francophone West Africa. Ivory Coast becomes the 19th African country where Standard Bank maintains a subsidiary.[7]

In December 2001, Standard Bank acquired 60.18% holding in the Commercial Bank of Malawi and became a majority shareholder. The bank was renamed Standard Bank Malawi.

Standard Bank SARL ("SBM") has a long history and is considered one of the leaders of the local market. Already active in Mozambique for 120 years. The network's Standard Bank is one of the largest in the country. Covers all major towns and cities of Mozambique, with 44 branches.[8]

The Standard Bank Namibia is largely detached from the South African parent company for legal reasons. The bank was established in Namibia by the first commercial branch on 19 August 1915 in Lüderitz. It's one of the largest banks in Namibia and operates from more than 50 branches.[9]

In 1995, the bank acquired the operations of the Meridien BIAO Bank and renamed it to Stanbic Bank Tanzania Limited.[5]

In the early 1990s the bank started operations in London, and Standard Bank London Ltd was awarded a banking licence in 1992.[5]

In January 2014 the Financial Conduct Authority (FCA) fined Standard Bank PLC (Standard Bank) £7,640,400 for failings relating to its anti-money laundering (AML) policies and procedures over corporate customers connected to politically exposed persons (PEPs). Between 15 December 2007 and 20 July 2011, Standard Bank failed to comply with Regulation 20(1) of the Money Laundering Regulations because it failed to take reasonable care to ensure that all aspects of its AML policies were applied appropriately and consistently to its corporate customers connected to PEPs.[14]

In 2006, Standard Bank bought BankBoston Argentina unit expanding its operations into this country. In 2012, ICBC acquired 80% of its shares. Rebranding occurred in April 2013.

Standard Bank has operations in the Isle of Man. [1]

Standard Bank has operations in Jersey. 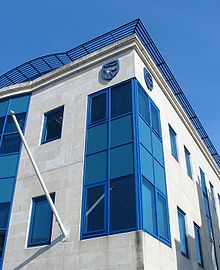 Also in August 2007, Standard Bank Group acquired a 67% share of the Turkish bank Dundas Ünlü Securities and now operates in Turkey under the name of Standard Ünlü. The Bank sold its shares down to 25% in April 2012 and the Turkish sub was renamed ÜNLÜ & Co. afterwards.

On 6 March 2009, Standard Bank announced plans to acquire 33% of Russia's second biggest investment bank, Troika. Troika, which is Russia's oldest brokerage, will acquire Standard Bank's current Russian banking operation, and will in addition receive cash of $200-million in the form of a 'convertible loan'[2]. Two executives of Standard Bank will join Troika's six-member board.

In October 2007 the Industrial and Commercial Bank of China acquired a stake of about 20% in Standard Bank for US$5.5bn. Half the stake came from ICBC acquiring existing shares and half from new shares. ICBC will also get two seats on the board of directors.

The South African Customer Satisfaction Index (SAcsi) of 2015 and 2016 rated Standard Bank as being lowest among South African banks in terms of customer service. Its overall movement in this index has shown a mild decline from previous ratings.[18]

That is the largest increase for any South African bank.

Standard Bank's marked improvement was due to its 'What's your next?' marketing campaign which sought to reconnect the brand with its customers.

Retrieved from "http://en.turkcewiki.org/w/index.php?title=Standard_Bank&oldid=944447043"
This website is a mirror of Wikipedia, and is not affiliated with the Wikimedia Foundation.
Categories:
Hidden categories: