A species description is a formal description of a newly discovered species, usually in the form of a scientific paper. Its purpose is to give a clear description of a new species of organism and explain how it differs from species which have been described previously or are related. The species description often contains photographs or other illustrations of the type material and states in which museums it has been deposited. The publication in which the species is described gives the new species a formal scientific name. Some 1.9 million species have been identified and described, out of some 8.7 million that may actually exist.[1] Millions more have become extinct.

A name of a new species becomes valid (available in zoological terminology) with the date of publication of its formal scientific description. Once the scientist has performed the necessary research to determine that the discovered organism represents a new species, the scientific results are summarized in a scientific manuscript, either as part of a book, or as a paper to be submitted to a scientific journal.

A scientific species description must fulfill several formal criteria specified by the nomenclature codes, e.g. selection of at least one type specimen. These criteria are intended to ensure that the species name is clear and unambiguous, for example, the International Code of Zoological Nomenclature (ICZN) states that "Authors should exercise reasonable care and consideration in forming new names to ensure that they are chosen with their subsequent users in mind and that, as far as possible, they are appropriate, compact, euphonious, memorable, and do not cause offence."[2]

Once the manuscript has been accepted for publication,[3] the new species name is officially created.

Once a species name has been assigned and approved, it can generally not be changed except in the case of error. For example, a species of beetle (Anophthalmus hitleri) was named by a German collector after Adolf Hitler in 1933 when he had recently become chancellor of Germany.[4] It is not clear whether such a dedication would be considered acceptable or appropriate today, but the name remains in use.[4]

Species names have been chosen on many different bases. Most common is a naming for the species' external appearance, its origin, or the species name is a dedication for a certain person. Examples would include a bat species named for the two stripes on its back (Saccopteryx bilineata), a frog named for its Bolivian origin (Phyllomedusa boliviana), and an ant species dedicated to the actor Harrison Ford (Pheidole harrisonfordi). A scientific name in honor of a person or persons is a known as a taxonomic patronym or patronymic.[5][6]

A number of humorous species names also exist. Literary examples include the genus name Borogovia (an extinct dinosaur), which is named after the borogove, a mythical character from Lewis Carrol's poem "Jabberwocky". A second example, Macrocarpaea apparata (a tall plant) was named after the magical spell "to apparate" from the Harry Potter novels by J. K. Rowling, as it seemed to appear out of nowhere.[7] In 1975, the British naturalist Peter Scott proposed the binomial name Nessiteras rhombopteryx ("Ness monster with diamond-shaped fin") for the Loch Ness Monster; it was soon spotted that it was an anagram of "Monster hoax by Sir Peter S".

Species have frequently been named by scientists in recognition of supporters and benefactors. For example, the genus Victoria (a flowering waterplant) was named in honour of Queen Victoria of Great Britain. More recently, a species of lemur (Avahi cleesei) was named after the actor John Cleese in recognition of his work to publicize the plight of lemurs in Madagascar.

Non-profit ecological organizations may also allow benefactors to name new species in exchange for financial support for taxonomic research and nature conservation. A German non-profit organisation (gemeinnütziger Verein), BIOPAT - Patrons for Biodiversity has raised more than $450,000 for research and conservation through sponsorship of over 100 species using this model.[8] An individual example of this system is the Callicebus aureipalatii (or "monkey of the Golden Palace"), which was named after the Golden Palace casino in recognition of a $650,000 contribution to the Madidi National Park in Bolivia in 2005.[9]

The International Code of Nomenclature for algae, fungi, and plants (ICN) discourages this practice somewhat: "Recommendation 20A. Authors forming generic names should comply with the following ... (h) Not dedicate genera to persons quite unconcerned with botany, mycology, phycology, or natural science in general."[10] 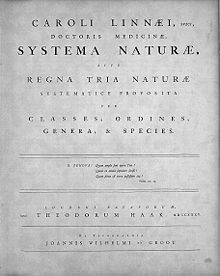 Early biologists often published entire volumes or multiple-volume works of descriptions in an attempt to catalog all known species. These catalogs typically featured extensive descriptions of each species and were often illustrated upon reprinting.

The first of these large catalogs was Aristotle's History of Animals, published around 343 B.C. Aristotle included descriptions of creatures, mostly fish and invertebrates, in his homeland, and several mythological creatures rumored to live in far-away lands, such as the manticore.

In 77 A.D. Pliny the Elder dedicated several volumes of his Natural History to the description of all life forms he knew to exist. He appears to have read Aristotle's work, since he writes about many of the same far-away mythological creatures.

Toward the end of the 12th century, Konungs skuggsjá, an Old Norse philosophical didactic work, featured several descriptions of the whales, seals, and monsters of the Icelandic seas. These descriptions were brief and often erroneous, and a description of the mermaid and a rare island-like sea monster called Hafgufu was included. The author was hesitant to mention the beast (known today to be fictitious) for fear of its size, but felt it was important enough to be included in his descriptions.[11]

However, the earliest recognized species authority is Linnaeus, who standardized the modern taxonomy system beginning with his Systema Naturae in 1735.[12]

As the catalog of known species was increasing rapidly, it became impractical to maintain a single work documenting every species. Publishing a paper documenting a single species was much faster and could be done by scientists with less broadened scopes of study. For example, a scientist who discovered a new species of insect would not need to understand plants, or frogs, or even insects which did not resemble the species, but would only need to understand closely related insects.

Formal species descriptions today follow strict guidelines set forth by the codes of nomenclature. Very detailed formal descriptions are made by scientists, who usually study the organism closely for a considerable time. A diagnosis may be used instead of,[13] or as well as[14] the description. A diagnosis specifies the distinction between the new species and other species.

According to the RetroSOS report,[15] the following numbers of species have been described each year since 2000.

Retrieved from "http://en.turkcewiki.org/w/index.php?title=Species_description&oldid=934305017"
This website is a mirror of Wikipedia, and is not affiliated with the Wikimedia Foundation.
Categories:
Hidden categories: