Jump to navigation Jump to search
This article is about the Ottoman designation. For the southern part of the modern Arab Republic of Syria, see As-Suwayda Governorate. For the Southern part of Syrian opposition territories, see Southern Front (Syrian rebel group). For the newspaper, see Suriyya al-Janubiyya (newspaper). 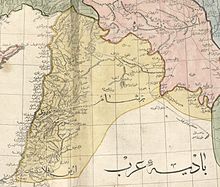 Syria in the Ottoman Cedid Atlas of 1803. The yellow area, corresponding to the Levant. The medium sized bold text says “برشام” (“Sham” or Syria) and "ارض فلاستان" ("Land of Palestine") in the middle and on the bottom left respectively

The term was used in Arabic primarily from 1918-20, during the Arab Kingdom of Syria period.[2][3][4][5] Zachary Foster in his Princeton doctoral dissertation has written that, in the decades prior to World War I, the term “Southern Syria” was the least frequently used out of ten different ways to describe the region of Palestine in Arabic, noting that “it took me nearly a decade to find a handful of references”.[6]

Throughout the Ottoman period, prior to World War I, the Levant was administered and viewed locally as one entity, divided into provinces.[citation needed] Geographically southern Syria included the southern sub-provinces of Ottoman Syria administrative region, including by the end of 19th and early 20th century the Mutasarrifate of Jerusalem, the Nablus Sanjak and Acre Sanjak (under Beirut Vilayet from 1888 and previously under Syria Vilayet), and a short-lived Mutasarrıfate of Karak (split as a new administrative unit from Syria Vilayet in 1894/5).[citation needed] In 1884, the governor of Damascus proposed the establishment of a new Vilayet in southern Syria, composed of the regions of Jerusalem, Balqa' and Ma'an though nothing came out of this.[7]

At the start of Faisal’s reign in the Arab Kingdom of Syria, the term Southern Syria became synonymous with Palestine. After 1918 it would take on an increased political significance as a way of rejecting the separation of the British Mandate from Syria.[8]

Usage during British and French occupation[edit]

In early 20th century, the term "Southern Syria" could imply support for the Greater Syria nationalism associated with the kingdom promised to the Hashemite dynasty of the Hejaz by the British during World War I. After the war, the Hashemite prince Faisal attempted to establish such a Greater Syrian or pan-Mashriq state—a united kingdom that would comprise all of what eventually became Syria, Lebanon, Israel, Jordan, and Palestine, but he was stymied by conflicting promises made by the British to different parties (see Sykes–Picot Agreement), leading to the French creation of the mandate of Syria and Lebanon in 1920.

According to the Minutes of the Ninth Session of the League of Nations' Permanent Mandates Commission, held in 1926, "Southern Syria" was suggested by some as the name of Mandatory Palestine in the Arabic language. The reports say the following:

"Colonel Symes explained that the country was described as 'Palestine' by Europeans and as 'Falestin' by the Arabs. The Hebrew name for the country was the designation 'Land of Israel', and the Government, to meet Jewish wishes, had agreed that the word "Palestine" in Hebrew characters should be followed in all official documents by the initials which stood for that designation. As a set-off to this, certain of the Arab politicians suggested that the country should be called 'Southern Syria' in order to emphasize its close relation with another Arab State".[9]

In 1932, an Arab party named "the Arab Independence Party in Southern Syria" was established in Mandatory Palestine to emphasize the reaffirmed support for Arab pan-Syrianism.[10]

Retrieved from "http://en.turkcewiki.org/w/index.php?title=Southern_Syria&oldid=960821976"
This website is a mirror of Wikipedia, and is not affiliated with the Wikimedia Foundation.
Categories:
Hidden categories: