The Slavic languages are part of the Balto-Slavic group, which belongs to the Indo-European language family. The South Slavic languages have been considered a genetic node in Slavic studies: defined by a set of phonological, morphological and lexical innovations (isoglosses) which separate it from the Western and Eastern Slavic groups. That view, however, has been challenged in recent decades (see below).

Some innovations encompassing all South Slavic languages are shared with the Eastern Slavic group, but not the Western Slavic. These include:[5]

This is illustrated in the following table:

Several isoglosses have been identified which are thought to represent exclusive common innovations in the South Slavic language group. They are prevalently phonological in character, whereas morphological and syntactical isoglosses are much fewer in number. Sussex & Cubberly (2006:43–44) list the following phonological isoglosses:

Most of these are not exclusive in character, however, and are shared with some languages of the Eastern and Western Slavic language groups (in particular, Central Slovakian dialects). On that basis, Matasović (2008) argues that South Slavic exists strictly as a geographical grouping, not forming a true genetic clade; in other words, there was never a proto-South Slavic language or a period in which all South Slavic dialects exhibited an exclusive set of extensive phonological, morphological or lexical changes (isoglosses) peculiar to them. Furthermore, Matasović argues, there was never a period of cultural or political unity in which Proto-South-Slavic could have existed during which Common South Slavic innovations could have occurred. Several South-Slavic-only lexical and morphological patterns which have been proposed have been postulated to represent common Slavic archaisms, or are shared with some Slovakian or Ukrainian dialects.[citation needed]

The South Slavic dialects form a dialectal continuum stretching from today's southern Austria to southeast Bulgaria.[6] On the level of dialectology, they are divided into Western South Slavic (Slovene and Serbo-Croatian dialects) and Eastern South Slavic (Bulgarian and Macedonian dialects); these represent separate migrations into the Balkans and were once separated by intervening Hungarian, Romanian, and Albanian populations; as these populations were assimilated, Eastern and Western South Slavic fused with Torlakian as a transitional dialect.[citation needed] On the other hand, the breakup of the Ottoman and Austro-Hungarian Empires, followed by formation of nation-states in the 19th and 20th centuries, led to the development and codification of standard languages. Standard Slovene, Bulgarian, and Macedonian are based on distinct dialects.[7] The Bosnian, Croatian, Montenegrin, and Serbian standard variants[8] of the pluricentric Serbo-Croatian[9] are based on the same dialect (Shtokavian).[10] Thus, in most cases national and ethnic borders do not coincide with dialectal boundaries.

Note: Due to the differing political status of languages/dialects and different historical contexts, the classifications are arbitrary to some degree. 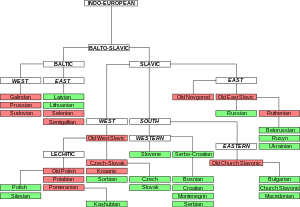 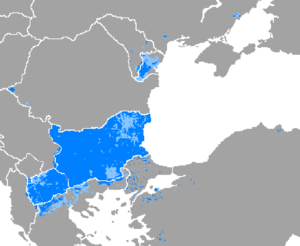 Areas where Eastern South Slavic dialects are spoken:
by a majority of speakers
by a minority. 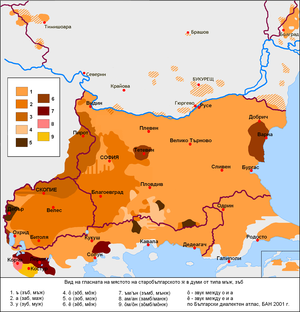 Map of the big yus (*ǫ) isoglosses in Eastern South Slavic and eastern Torlakian according to the Bulgarian Academy of Sciences' atlas from 2001.[11] Pronunciation of man and tooth, derived from proto-words zǫbъ mǫžь on the map:

The dialects that form the eastern group of South Slavic, spoken mostly in Bulgaria and Macedonia and adjacent areas in neighbouring countries (such as the Bessarabian Bulgarians in Ukraine), share a number of characteristics that set them apart from other Slavic languages:[12][13]

Bulgarian and Macedonian share some of their unusual characteristics with other languages in the Balkans, notably Greek and Albanian (see Balkan sprachbund).[12]

Torlakian, is spoken in southern and eastern Serbia, northern North Macedonia, and western Bulgaria; it is considered transitional between the Central and Eastern groups of South Slavic languages. Torlakian is thought to fit together with Bulgarian and Macedonian into the Balkan sprachbund, an area of linguistic convergence caused by long-term contact rather than genetic relation. Because of that some researchers tend to classify it as Eastern South Slavic.[14]

Each of these primary and secondary dialectal units breaks down into subdialects and accentological isoglosses by region. In the past (and currently, in isolated areas), it was not uncommon for individual villages to have their own words and phrases. However, during the 20th century the local dialects have been influenced by Štokavian standards through mass media and public education and much "local speech" has been lost (primarily in areas with larger populations). With the breakup of Yugoslavia, a rise in national awareness has caused individuals to modify their speech according to newly established standard-language guidelines. The wars have caused large migrations, changing the ethnic (and dialectal) picture of some areas—especially in Bosnia and Herzegovina, but also in central Croatia and Serbia (Vojvodina in particular). In some areas, it is unclear whether location or ethnicity is the dominant factor in the dialect of the speaker. Because of this the speech patterns of some communities and regions are in a state of flux, and it is difficult to determine which dialects will die out entirely. Further research over the next few decades will be necessary to determine the changes made in the dialectical distribution of this language group.

The table below illustrates relationships among the varieties of the western group of South Slavic languages:

The eastern Herzegovinian dialect is the basis of the Bosnian, Croatian, Montenegrin, and Serbian standard variants of the pluricentric Serbo-Croatian.[15]

The Slavomolisano dialect is spoken in three villages of the Italian region of Molise by the descendants of South Slavs who migrated from the eastern Adriatic coast during the 15th century. Because this group left the rest of their people so long ago, their diaspora language is distinct from the standard language and influenced by Italian. However, their dialect retains archaic features lost by all other Štokavian dialects after the 15th century, making it a useful research tool.

Chakavian is spoken in the western, central, and southern parts of Croatia—mainly in Istria, the Kvarner Gulf, Dalmatia and inland Croatia (Gacka and Pokupje, for example). The Chakavian reflex of proto-Slavic yat is i or sometimes e (rarely as (i)je), or mixed (Ekavian–Ikavian). Many dialects of Chakavian preserved significant number of Dalmatian words, but also have many loanwords from Venetian, Italian, Greek and other Mediterranean languages.

This dialect is spoken primarily in the federal state of Burgenland in Austria and nearby areas in Vienna, Slovakia, and Hungary by descendants of Croats who migrated there during the 16th century. This dialect (or family of dialects) differs from standard Croatian, since it has been heavily influenced by German and Hungarian. It has properties of all three major dialectal groups in Croatia, since the migrants did not all come from the same area. The linguistic standard is based on a Chakavian dialect, and (like all Chakavian dialects) is characterized by very conservative grammatical structures: for example, it preserves case endings lost in the Shtokavian base of standard Croatian. At most 100,000 people speak Burgenland Croatian and almost all are bilingual in German. Its future is uncertain, but there is movement to preserve it. It has official status in six districts of Burgenland, and is used in some schools in Burgenland and neighboring western parts of Hungary.

Kajkavian is mostly spoken in northern and northwest Croatia, including one-third[dubious – discuss] of the country near the Hungarian and Slovenian borders—chiefly around the towns of Zagreb, Varaždin, Čakovec, Koprivnica, Petrinja, Delnice and so on. Its reflex of yat is primarily /e/, rarely diphthongal ije). This differs from that of the Ekavian accent; many Kajkavian dialects distinguish a closed e—nearly ae (from yat)—and an open e (from the original e). It lacks several palatals (ć, lj, nj, dž) found in the Shtokavian dialect, and has some loanwords from the nearby Slovene dialects and German (chiefly in towns).

Slovenian is mainly spoken in Slovenia. Spoken Slovene is often considered to have at least 37 dialects.[16] The exact number of dialects is open to debate,[17] ranging from as many as 50 to merely 7.[18] However, this latter number usually refers to dialect groups, some of which are more heterogeneous than others. The various dialects can be so different from each other that a speaker of one dialect may have a very difficult time understanding a speaker of another,[19] particularly if they belong to different regional groups. Some dialects spoken in southern Slovenia transition into Chakavian or Kajkavian Serbo-Croatian, while the transition from eastern dialects to Kajkavian is general, with cases of essentially the same linguistic variety spoken on both sides of the border (this is particularly true for the upper course of the Kupa and Sutla rivers).

The table below compares grammatical and phonological innovations. The similarity of Kajkavian and Slovenian is apparent.

In broad terms, the Eastern dialects of South Slavic (Bulgarian and Macedonian) differ most from the Western dialects in the following ways:

Apart from these three main areas there are several smaller, significant differences:

Languages to the west of Serbia use the Latin script, whereas those to the east and south use Cyrillic. Serbian officially uses the Cyrillic script, though commonly Latin and Cyrillic are used equally. Most newspapers are written in Cyrillic and most magazines are in Latin; books written by Serbian authors are written in Cyrillic, whereas books translated from foreign authors are usually in Latin, other than languages that already use Cyrillic, most notably Russian. On television, writing as part of a television programme is usually in Cyrillic, but advertisements are usually in Latin. The division is partly based on religion – Serbia, Montenegro, Bulgaria and Macedonia (which use Cyrillic) are Orthodox countries, whereas Croatia and Slovenia (which use Latin) are Catholic.[23] Bosnian language, used by the Muslim Bosniaks, also uses Latin, but in the past used Bosnian Cyrillic. The Glagolitic alphabet was also used in the Middle Ages (most notably in Bulgaria, Macedonia and Croatia), but gradually disappeared.

Retrieved from "http://en.turkcewiki.org/w/index.php?title=South_Slavic_languages&oldid=961576599"
This website is a mirror of Wikipedia, and is not affiliated with the Wikimedia Foundation.
Categories:
Hidden categories: