The Society of Motion Picture and Television Engineers (SMPTE) (/ˈsɪmptiː/, rarely /ˈsʌmptiː/), founded in 1916 as the Society of Motion Picture Engineers or SMPE,[1] is a global professional association, of engineers, technologists, and executives working in the media and entertainment industry. An internationally recognized standards organization, SMPTE has more than 800 Standards, Recommended Practices, and Engineering Guidelines for broadcast, filmmaking, digital cinema, audio recording, information technology (IT), and medical imaging. In addition to development and publication of technical standards documents, SMPTE publishes the SMPTE Motion Imaging Journal, provides networking opportunities for its members, produces academic conferences and exhibitions, and performs other industry-related functions.

SMPTE membership is open to any individual or organization with interest in the subject matter. In the US, SMPTE is a 501(c)3 non-profit charitable organization.

SMPTE's educational and professional development activities include technical presentations at regular meetings of its local Sections, annual and biennial conferences in the US and Australia and the SMPTE Motion Imaging Journal. The society sponsors many awards, the oldest of which are the SMPTE Progress Medal, the Samuel Warner Memorial Medal, and the David Sarnoff Medal.[2] SMPTE also has a number of Student Chapters and sponsors scholarships for college students in the motion imaging disciplines. 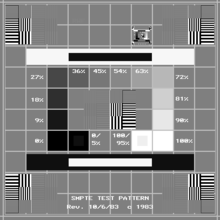 SMP(T)E'S first standard was to get everyone using 35 mm film width, four sprockets per frame, 1.37:1 picture ratio. Until then, there were competing film formats, now theaters could all run the same films.

SMP(T)E's standard in 1927 was for speed at which sound film is shown, 24 frames per second.[3] Before this it was determined by the hand cranking speed of the cameraman.

SMPTE's taskforce on "3D to the home" produced a report on the issues, challenges and suggested minimum standards for the 3D home master that would be distributed after post production to the ingest points of distribution channels for 3D video content. A group within the standards committees has begun to work on the formal definition of the SMPTE 3D Home Master.[4][5][6]

SMPTE, instituted in 1999, a technology committee for the foundations of Digital Cinema : DC28.[7]

The SMPTE presents awards to individuals for outstanding contributions in fields of the society.

Honorary membership and the honor roll[edit]

The Progress Medal, instituted in 1935, is SMPTE's oldest and most prestigious medal, and awarded annually for contributions to engineering aspects of the film and/or television industries.[8]

Retrieved from "http://en.turkcewiki.org/w/index.php?title=Society_of_Motion_Picture_and_Television_Engineers&oldid=958391957"
This website is a mirror of Wikipedia, and is not affiliated with the Wikimedia Foundation.
Categories:
Hidden categories: