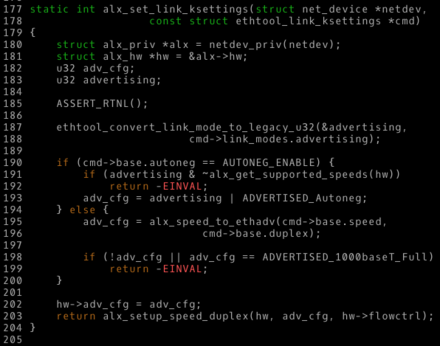 Piece of code from a module of the Linux kernel, which uses snake case for identifiers.

Snake case (stylized as snake_case) refers to the style of writing in which each space is replaced by an underscore (_) character, and the first letter of each word written in lowercase. It is a commonly used naming convention in computing, for example for variable and subroutine names, and for filenames. One study has found that readers can recognize snake case values more quickly than camel case.[1]

The use of underscores as word separators dates back to the late 1960s. It is particularly associated with C, being found in The C Programming Language (1978), and contrasted with pascal case (a type of camel case). However, the convention traditionally had no specific name: the Python programming language style guide refers to it simply as "lower_case_with_underscores".[2]

Within Usenet the term snake_case was first seen in the Ruby community in 2004,[3] used by Gavin Kistner, writing:

"BTW...what *do* you call that naming style? snake_case? That's what I'll call it until someone corrects me."

However, former Intel engineer Jack Dahlgren has stated that he was using the term internally at Intel (and perhaps in dialogue with Microsoft engineers) in 2002.[4][failed verification] It is possible that the term developed independently in more than one community.

As of 2015[update], names for other delimiter-separated naming conventions for multiple-word identifiers have not been standardized, although some terms have increasing levels of usage, such as lisp-case, kebab-case, SCREAMING_SNAKE_CASE, and more.[5][6][7]

A list of programming languages which conventionally use snake case

Retrieved from "http://en.turkcewiki.org/w/index.php?title=Snake_case&oldid=1026311683"
This website is a mirror of Wikipedia, and is not affiliated with the Wikimedia Foundation.
Categories:
Hidden categories: