(Redirected from Slow food)
Jump to navigation Jump to search

Slow Food is an organization that promotes local food and traditional cooking. It was founded by Carlo Petrini in Italy in 1986 and has since spread worldwide. Promoted as an alternative to fast food, it strives to preserve traditional and regional cuisine and encourages farming of plants, seeds, and livestock characteristic of the local ecosystem. It promotes local small businesses and sustainable foods. It also focuses on food quality, rather than quantity.[2] It was the first established part of the broader slow movement. It speaks out against overproduction and food waste.[3] It sees globalization as a process in which small and local farmers and food producers should be simultaneously protected from and included in the global food system.[4][5] 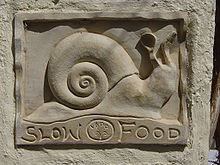 Slow Food began in Italy with the founding of its forerunner organization, Arcigola, in 1986[6] to resist the opening of a McDonald's near the Spanish Steps in Rome.[7] In 1989, the founding manifesto of the international Slow Food movement was signed in Paris, France, by delegates from 15 countries.[8]

At its heart is the aim to promote local foods and traditional gastronomy and food production. Conversely, this means an opposition to fast food, industrial food production, and globalization.[9]

The Slow Food organisation has expanded to include over 100,000 members, with branches in over 150 countries.[10] Over 1,300 local convivia chapters exist. About 360 convivia in Italy—to which the name condotta (singular) / condotte (plural) applies—are composed of 35,000 members, along with 450 other regional chapters around the world. The organisational structure is decentralised: each convivium has a leader who is responsible for promoting local artisans, local farmers, and local flavors through regional events such as Taste Workshops, wine tastings, and farmers' markets.

Offices have been opened in Switzerland (1995), Germany (1998), New York City (2000), France (2003), Japan (2005), the United Kingdom, and Chile. Global headquarters are located in Bra, near Turin, Italy. Numerous publications are put out by the organisation, in several languages around the world. Recent efforts at publicity include the world's largest food and wine fair, the Salone del Gusto in Turin, a biennial cheese fair in Bra called Cheese, the Genoan fish festival called SlowFish, and Turin's Terra Madre ("Mother Earth") world meeting of food communities.

In 2004, Slow Food opened a University of Gastronomic Sciences[11] at Pollenzo, in Piedmont, and Colorno, in Emilia-Romagna, Italy. The Colorno branch has since been closed and transferred to Pollenzo. Carlo Petrini and Massimo Montanari are the leading figures in the creation of the university, whose goal is to promote awareness of good food and nutrition.

Slow Food Germany is among the organisers of the yearly demonstrations under the banner We are fed up! in Berlin.[12]

Slow Food incorporates a series of objectives within its mission, including:

Founder and President Carlo Petrini, believes "everyone has the right to good, clean, and fair food."[13] Good, meaning a high quality product with a flavorful taste, clean meaning the naturalness in the way the product was produced and transported and fair, meaning adequate pricing and treatment for both the consumers and producers. 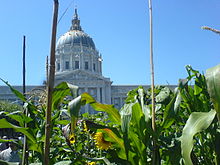 In 2008, Slow Food USA hosted its largest gathering to date dubbed Slow Food Nation in San Francisco.[14] The event reconvened in 2017 as Slow Food Nations, the stateside equivalent to Terra Madre Salone del Gusto, and was held in Denver, Colorado. The event is scheduled to continue in 2018.[15]

As of 2013[update], Slow Food USA has a membership of roughly 12,000, down from over 30,000 in 2008.[citation needed] In 2011, the organization was forced to make a series of staff layoffs and reductions and had faced a significant reduction in their income from wealthy supporters. This was partly attributed to the economic recession, but also to disagreements within the movement and a loss of several key personalities.[16]

Slow Food USA currently has 200 chapters,[17] down from 225 chapters in 2011.[18] These are locally based and governed 501(c)3 non-profit organizations that hold events and education outreach programs that benefit their communities while carrying out the message of the slow food movement and advancing the local environmental movement. The movement also encourages the creation of urban gardens.[19]

Beyond the chapters established within the cities in the United States, a number of universities are becoming recognised by Slow Food USA, including the University of Wisconsin at Madison. Slow Food-University of Wisconsin has five projects that are dedicated to the movement's efforts, including a Family Dinner Night, weekly café, and a Farm to University scheme. From then, 46 Slow Food chapters have been established on campuses of higher education.[20]

In October 2014, the organization formed an initial 15-month partnership with fast-food chain Chipotle Mexican Grill, which had the company funding $500,000 toward Slow Food USA's National School Garden Program; 100 school gardens in different cities across the US would be funded in an effort to teach children where food comes from and how food is grown.[22]

Some of the local groups are very large, such as Slow Food London, and run programmes such as the Slow Food Global Schools Twinning Programme, which are more akin to the work of a national office. Slow Food London is also the major campaigning Slow Food body within the UK, responding to every local, national, and European consultation on food, fisheries, and agriculture, and has even been a co-signatory in judicial review against the UK government in regards to food and farming, retaining a leading firm of solicitors pro bono on an ongoing basis.

In the Netherlands especially the Slow Food Youth Network (SFYN) is very active. SFYN is a worldwide network of young people creating a better future through food. SFYN believes that they, as young people, must play an important role in the future of food production and consumption. That is why they bring young consumers, producers, farmers, chefs and students closer together. In the Netherlands they do this through eat-ins, tastings, events such as World Disco Soup Day, the talkshow Als Warme Broodjes, campaigns such as food education and projects such as the SFYN Academy.

In 2010, Slow Food International began its independent Slow Wine project with the release of a wine guide.[27] Prior to 2010, Slow Food worked with publisher Gambero Rosso to release a guide.[28] The first edition of Slow Food's first solo effort was released in 1993, with the title "Slow Food guide to the wines of the world", translated into five languages and sold in more than 50,000 copies.[29] The guide was an attempt to review not only the wines, but also the wineries and the people behind the bottle.[30] Two editions of the guide have been published, also available in English.[31]

Slow Food's aims have been compared to the Arts and Crafts movement's response to 19th-century industrialisation.[9] Some of the criticisms aimed at the movement are socioeconomic. For example, without significantly altering the working day of the masses, slow food preparation can be an additional burden to whoever prepares food.[9] In contrast, the more affluent society can afford the time and expense of developing "taste", "knowledge", and "discernment". Slow Food's stated aim of preserving itself from the "contagion of the multitude" can be seen as elitist.[9] In 1989, Petrini visited Venezuela and began to recognize the socioeconomic barriers that many faced with regard to the slow food movement. To address this, he adjusted the slow food agenda to include an alternative food approach that favored healthy, local, community-based food consumption and production.[32] While this made the slow food movement more accessible for many, it did not eliminate all of the socioeconomic barriers faced within the movement.

Retrieved from "http://en.turkcewiki.org/w/index.php?title=Slow_Food&oldid=963576942"
This website is a mirror of Wikipedia, and is not affiliated with the Wikimedia Foundation.
Categories:
Hidden categories: