Jump to navigation Jump to search
This article is about the financial concept. For other uses, see Slippage.

With regard to futures contracts as well as other financial instruments, slippage is the difference between where the computer signaled the entry and exit for a trade and where actual clients, with actual money, entered and exited the market using the computer’s signals.[1] Market impact, liquidity, and frictional costs may also contribute.

Algorithmic trading is often used to reduce slippage, and algorithms can be backtested on past data to see the effects of slippage, but it’s impossible to eliminate entirely.[2]

Nassim Nicholas Taleb (1997) defines slippage as the difference between the average execution price and the initial midpoint of the bid and the offer for a given quantity to be executed.

Knight and Satchell mention a flow trader needs to consider the effect of executing a large order on the market and to adjust the bid-ask spread accordingly. They calculate the liquidity cost as the difference between the execution price and the initial execution price. 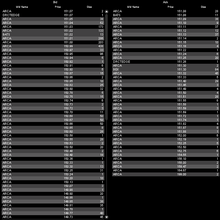 Slippage Example on the SPY ETF

The associated image depicts the Level II (Market Depth) quotes of the SPY ETF (Exchange-Traded Fund) at a given instant in time.

MM Name: This is the Market Maker name column
Price: This is the "market depth" price.
Size: This is the number of shares at this price level (represented in hundreds). So, 2 actually means 200 shares.

Reverse slippage as described by Taleb occurs when the purchase of a large position is done at increasing prices, so that the mark to market value of the position increases. The danger occurs when the trader attempts to exit his position. If the trader manages to create a squeeze large enough then this phenomenon can be profitable. This can also be considered a type of market making.

Retrieved from "http://en.turkcewiki.org/w/index.php?title=Slippage_(finance)&oldid=879493378"
This website is a mirror of Wikipedia, and is not affiliated with the Wikimedia Foundation.
Categories: