Sinop, historically known as Sinope (/sɪˈnoʊpi/), is a city with a population of 36,734 on the isthmus of İnce Burun (İnceburun, Cape Ince), near Cape Sinope (Sinop Burnu, Boztepe Cape, Boztepe Burnu) which is situated on the most northern edge of the Turkish side of the Black Sea coast, in the ancient region of Paphlagonia, in modern-day northern Turkey. The city serves as the capital of Sinop Province. 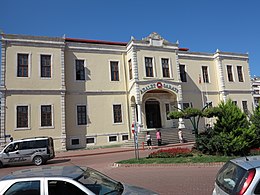 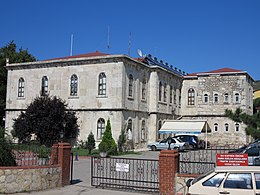 Over a period of approximately 2,500 years, Sinope has at various times been settled by Colchians, Greeks (in the late 7th, late 5th, and 4th–3rd centuries BC), by Romans in the mid-1st century BC, and by Turkic people beginning in the 12th century. In the 19th and 20th centuries it was also settled by the muhacir who immigrated from the Balkans and Caucasus.[3]

Evidence for Hittite Kingdom settlement along the Black Sea's southern shore remains murky. Researchers in the 1940s and 50s debated whether the "Great Sea", mentioned on the Boghazkoy tablets describing war between the Kizzuwatna tribe and the Hittites, could mean the Black Sea. Albrecht Goetze argued that the Hittites had never reached the northern Black Sea shore, instead drawing the northernmost boundary of the Hittite Kingdom to the south of the North Anatolia mountain range. D.S. Hogarth similarly concluded that the northern boundary of the Hittites never reached the shore. Hogarth's boundary was based on the distribution of Hittite monuments. Some objects found at Sinope are believed to be of Hittite origin.[4]

The Greek colony of Sinope (Greek: Σινώπη, romanized: Sinṓpē) was founded by Ionians from the city of Miletus.[5] Sinope issued its own coinage, founded colonies, and gave its name to a red earth pigment called sinopia, which was mined in Cappadocia for use throughout the ancient world.[6] Some scholars have dated the earliest Greek colonization of Sinope to the 7th c. BC, while others have proposed an earlier date in the 8th c. While literary evidence exists supporting earlier settlement, archaeological evidence has been found of Greek settlement around the Black Sea region beginning in the late 7th century.[7][8]

Sinope was strategically located among the trade routes that were developing on the southern Coast of the Black Sea, but remained relatively isolated from other inland communities until the 4th century BC.[3][9] There is literary evidence of early links between Colchis and Sinope in mythological tradition. Strabo's writings link the legendary founder of Sinope, Autolycus, with Jason and the Argonauts. Polybius described Sinope as being "on the way to Phasis".[10] The Persian Achaemenid Empire's northward expansion in the 4th century disrupted Sinope's control over its eastern colonies, including Trapezus (present day Trabzon). The satrap Datames briefly occupied the city around 375 BC.[11][12] There is archaeological evidence of increased economic activity between the port city of Sinope and the surrounding inland areas during between 4th and 1st c. BC. Sinope appears to have maintained its independence from the dominion of Alexander the Great, and with the help of Rhodes turned back an assault led by Mithridates II of Pontus in 220 BC. Sinope eventually fell to Pharnaces I in 183 BC, after which it became the capital of the Pontic Kingdom.[3][12] 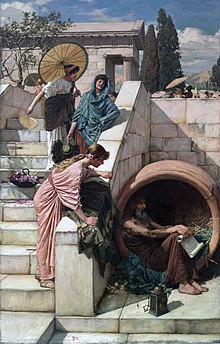 Sinop is the birthplace of the famous Greek philosopher Diogenes.

The Roman general Lucullus conquered Sinope in 70 BC, and Julius Caesar established a Roman colony there, Colonia Julia Felix, in 47 BC. Mithradates Eupator was born and buried at Sinope, and it was the birthplace of Diogenes, of Diphilus, poet and actor of the New Attic comedy, of the historian Baton, and of the Christian heretic of the 2nd century AD, Marcion.

After the division of the Roman Empire in 395, Sinope remained with the Eastern Roman or Byzantine Empire. Its history in the early Byzantine period is obscure, except for isolated events: it was used by Justinian II as a base from which to reconnoitre Cherson, participated in the rebellion of the Armeniac Theme in 793, was the site of Theophobos' proclamation as emperor by his Khurramite troops in 838, and suffered its only attack by the Arabs in 858.[13]

In 1081, the city was captured by the Seljuk Turks, who found there a sizeable treasury, but Sinope was soon recovered by Alexios I Komnenos, ushering a period of prosperity under the Komnenian dynasty.[13] After the sacking of Constantinople by the Fourth Crusade in 1204, it was captured for the Empire of Trebizond by David Komnenos, until the Seljuk Turks of Rûm successfully captured the city in 1214.[13][14] The city returned briefly to Trapezuntine rule in 1254, but returned to Turkish control in 1265, where it has remained since.[13]

After 1265, Sinop became home to two successive independent emirates following the fall of the Seljuks: the Pervâne and the Jandarids. The Ottoman Sultan Mehmet II overawed Ismail, the emir of Sinope on his march on Trebizond, and forced him to surrender the city to the Sultan late June 1461 without a fight. The emir was exiled to Philippopolis (modern Plovdiv) in northern Thrace.[15]

Ibn Battuta visited the city and stayed for about forty days. He noted it was "a superb city which combines fortification with beautification."[16]

In 1614, Sinop was targeted by Cossack raiders and extensively looted and burned in an event which shocked Ottoman contemporaries.[17]

In November 1853, at the start of the Crimean War, in the Battle of Sinop, the Russians, under the command of Admiral Nakhimov, destroyed an Ottoman frigate squadron in Sinop, leading Britain and France to declare war on Russia.

In the late 19th and early 20th century, Sinop was part of the Kastamonu Vilayet of the Ottoman Empire.

As of 1920, Sinop was described as populated mainly by Greeks with an approximate population of 8,000. It was also considered the "safest" port "between Bosphorus and Batum", at the time. During this period, the port was exporting wheat, tobacco, seeds, timber and hides. They imported produce, coal and hardware.[18]

Sinop hosted a US military base and radar that was important for intelligence during the cold war era. The US base was closed in 1992.

Explorer Robert Ballard discovered an ancient ship wreck north west of Sinop in the Black Sea and was shown on National Geographic. 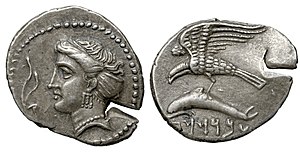 Coinage of Achaemenid satrap Abrocomas, Sinope, Paphlagonia, circa 400-385 BC. 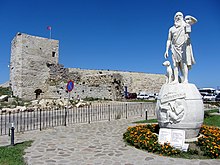 Statue of Diogenes at Sinop.

Greek coins featuring an eagle holding a dolphin or marine animal in its talons have been found in Sinope, Istria and Olbia. Located in present-day Turkey, Romania and Ukraine respective, all three were colonies of Miletus. The coins circulated between c. 450 and 325 BC.[19] Coins of the "Sinope type" continued to be issued by Persians under Achaemenid rule in the 4th century BC. At least two Persian issuers of such coins have been studied in some detail: the satrap Datames in Cappadocia and Ariarathes.[20]

Sinope is located on a promontory at the narrowest point of the Black Sea. It has two harbors and is located along the southern shore of the Black Sea, near the shortest crossing to the Crimea. The nearby mountainous terrain is green and noted for its timber.[3][12] 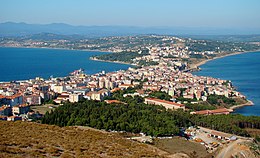 Sinop view from top of the hill.

As of 1920, Sinop was producing embroidered cotton cloth. They also were known for boatbuilding. The British described the boats produced in Sinop as being of "primitive design but sound workmanship."[23]

Sinop is currently slated to be the site of the Sinop Nuclear Power Plant, a $15.8 billion nuclear power plant being developed by Elektrik Üretim, Engie, Mitsubishi Heavy Industries and Itochu. The plant will consist of four reactors, with construction to begin as early as 2017 and completion by 2028.[24] 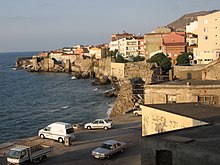 Visitor attraction places in Sinop are:[25][26]

Pasha Bastion (Turkish: Paşa Tabyası) is a half-moon coastal bastion, a semi-circular fortification, situated southeast of Sinop Peninsula. It was constructed to protect the city against attacks coming from the Black Sea during the Russo-Turkish War, Crimean War (1853–1856). It features an artillery battery of eleven cannons, an arsenal and basement. Today, it is used as a place for refreshments premise.[27]

Balatlar Church (Turkish: Balatlar Kilisesi) is a ruined church from the Byzantine Empire period. It is partly preserved as only the chapel vault is in undamaged condition while other parts of the church have no roof any more. Fresco paintings on the chapel's ceiling and on the nave walls are still intact.[27]

Serapeum is a ruined temple dedicated to the combined Hellenistic-Ancient Egyptian deity Serapis, situated in the southwestern corner in the yard of Sinop Archaeological Museum.[28]

Alaaddin Mosque is a 13th-century mosque of Seljuk architecture named after its endower Sultan Alaaddin Kayqubad I (1188–1237).[29]

Pervane Medrese is a former Islamic religious school, which was closed down after the proclamation of the Republic. The 13th-century building was used as a depot for archaeological artifacts and ethnographic items from 1932 on, and served as a museum between 1941 and 1970. It hosts souvenir shops today.[29]

Sinop Fortress (Turkish: Sinop Kalesi) is a fortification surrounding the peninsula and the isthmus of Sinop. It was built initially by migrants from Miletus in the 8th century BC. The fortress underwent reparation and expansion to its current extent during the reign of King Mithridates IV of Pontus in the 2nd century BC after its destruction by the Cimmerians in the 7th century BC. Some parts of the fortress, especially the north walls, are ruined.[30]

Sinop Fortress Prison (Turkish: Sinop Tarihi Cezaevi) is a defunct state prison situated inside the Sinop Fortress. Served between 1887 and 1997, the prison rose to fame when it featured in many literature works of notable aıthors, who were inmates of the prison for political reasons. It became also a shooting set for many movies and television series. It is a prison museum today.[31]

Sinop Ethnographic Museum (Turkish: Sinop Etnografya Müzesi) is a museum of ethnographic exhibits belonging to the cultural history of the region. It is situated in a large 18th-century mansion.[33]

Statue of Diogenes (Turkish: Diyojen Heykeli) is a monument to the Ancient Greek philosopher Diogenes of Sinope born in Sinop in about 412 BC.[34]

Sinope has given its name to the outermost satellite of Jupiter. A crater on Mars is named after Sinop.

Sinopat Wikipedia's sister projects
Retrieved from "http://en.turkcewiki.org/w/index.php?title=Sinop,_Turkey&oldid=962186327"
This website is a mirror of Wikipedia, and is not affiliated with the Wikimedia Foundation.
Categories:
Hidden categories: