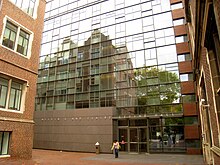 The Singh Program in Networked & Social Systems Engineering (also known as NETS) is a 4-year undergraduate degree program at the University of Pennsylvania's School of Engineering, designed to connect computer science and systems engineering towards networks and social interactions. The program is part of the Penn Engineering's Integrated Studies Program.[1]

Students receive a Bachelor of Engineering degree in Networked & Social Systems Engineering from the University of Pennsylvania School of Engineering and Applied Science. The program was established to give undergraduates the opportunity to study network science by creating a curriculum consisting of computer science, economics, systems engineering, and sociology. Courses unique to the NETS program cover topics such as cloud computing, network theory, and algorithmic game theory.

The program is highly selective, admitting about 15 students each year.[1] Acceptance requires both admission to the School of Engineering and the program itself. [2] The program identifies strong candidates as top academic students who have strong math and computer science interests and competencies, while also interested in sociology and economics.[3] Students who apply to the NETS program are provided the opportunity to declare a secondary major due to its selectivity, and are required to write an additional essay.

The undergraduate program has close ties with the Warren Center for Network & Data Sciences. The NETS Speaker Series, in conjunction with Yahoo! and the Warren Center, has welcomed speakers from academia and industry such as Alvin E. Roth, Sue Gardner, Matthew O. Jackson, Éva Tardos, Cynthia Dwork, and researchers from Facebook and Yahoo!.[4]

Graduates of the NETS program typically have careers in Internet companies, technology consulting, start businesses, or pursue graduate degrees in a wide range of fields. [5]

Students pick from one of four depth areas to complete their NETS degree: Networked and Cloud Services, Theory of Networks and Dynamics, Economic and Networked Markets, Technology and Security.[6] Students are also required to complete NETS core courses: NETS112 Networked Life, NETS150 Market and Social Systems on the Internet, NETS212 Scalable and Cloud Computing, NETS312 Theory of Networks, and NETS412 Algorithmic Game Theory.[6] Both of these elements are unique to the NETS program and are designed to help students attain "a versatile mastery of traditional computer science and systems engineering and economics, as well as study the sociological implications of life in the digital age."[7]

The program is named after Rajendra and Neera Singh, owners of Telecom Ventures LLC. The Singh's donated $8 million to found the NETS program, described as "the world's first undergraduate engineering curriculum for the networked economy."[8][9] They also funded the Singh Center for Nanotechnology.

The NETS program began in 2011 and graduated its first class in 2015. The founding directors of the program are Michael Kearns and Ali Jadbabaie.

The introductory class for the major, A Networked Life,[11] is offered on Coursera and attracted 40,000 students in its first online offering.[12]

Retrieved from "http://en.turkcewiki.org/w/index.php?title=Singh_Program_in_Networked_%26_Social_Systems_Engineering_(NETS)&oldid=928560160"
This website is a mirror of Wikipedia, and is not affiliated with the Wikimedia Foundation.
Categories: