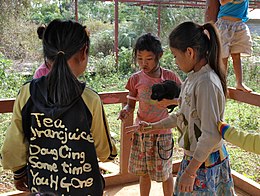 Rock–paper–scissors is an example of a simultaneous game.

In sequential games, players observe what rivals have done in the past and there is a specific order of play.[5] However, in simultaneous games, all players select strategies without observing the choices of their rivals and players choose at the exact same time.[5]

A simple example is rock-paper-scissors in which all players make their choice at the exact same time. However moving at exactly the same time isn’t always taken literally, instead players may move without being able to see the choices of other players.[5] A simple example is an election in which not all voters will vote literally at the same time but each voter will vote not knowing what anyone else has chosen.

In a simultaneous game, players will make their moves simultaneously, determine the outcome of the game and receive their payoffs.

The most common representation of a simultaneous game is normal form (matrix form). For a 2 player game; one player selects a row and the other player selects a column at the exact same time. Traditionally, within a cell, the first entry is the payoff of the row player, the second entry is the payoff of the column player. The “cell” that is chosen is the outcome of the game.[4]

Rock-paper-scissors, a widely played hand game, is an example of a simultaneous game. Both players make a decision without knowledge of the opponent's decision, and reveal their hands at the same time. There are two players in this game and each of them has three different strategies to make their decision; the combination of strategy profiles forms a 3×3 table. We will display Player 1's strategies as rows and Player 2's strategies as columns. In the table, the numbers in red represent the payoff to Player 1, the numbers in blue represent the payoff to Player 2. Hence, the pay off for a 2 player game in rock-paper-scissors will look like this:[4]

Another common representation of a simultaneous game is extensive form (game tree). Information sets are used to emphasis the imperfect information. Although it is not simple, it is easier to use game trees for games with more than 2 players.[4] 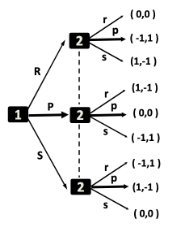 Some variants of chess that belong to this class of games include synchronous chess and parity chess.[7]

In a simultaneous game, players only have one move and all moves are made simultaneously. The number of players in a game must be stipulated and all possible moves for each player must be listed. Each player may have different roles and options for moves.[8] However, each player has a finite number of options available to choose.

An example of a simultaneous 2-player game:

A town has two companies, A and B, who currently make $8,000,000 each and need to determine whether they should advertise. The table below shows the payoff patterns; the rows are options of A and the columns are options of B. The entries are payoff for A and payoff for B, separated by a comma.[8]

An example of a simultaneous zero-sum 2-player game:

Rock-scissors-paper is being played by two friends, A and B for $10. The first cell stands for a payoff of 0 for both players. The second cell is a payoff of 10 for A which has to be paid by B, therefore a payoff of -10 for B.

An example of a simultaneous 3-player game:

A classroom vote is held as to whether or not they should have an increased amount of free time. Player A selects the matrix, player B selects the row, and player C selects the column.[8] The payoffs are:

Game theory should provide players with advice on how to find which move is best. These are known as “Best Response” strategies.[9]

For simultaneous games, players will typically select mixed strategies while very occasionally choosing pure strategies. The reason for this is that in a game where players don’t know what the other one will choose it is best to pick the option that is likely to give the you the greatest benefit for the lowest risk given the other player could choose anything[9] i.e. if you pick your best option but the other player also picks their best option, someone will suffer.

When analysing a simultaneous game:

Secondly, if there aren’t any dominant strategies, identify all strategies dominated by other strategies. Then eliminate the dominated strategies and the remaining are strategies players will play.[10]

Some people always expect the worst and believe that others want to bring them down when in fact others want to maximise their payoffs. Still, nonetheless, player A will concentrate on their smallest possible payoff, believing this is what player A will get, they will choose the option with the highest value. This option is the maximin move (strategy), as it maximises the minimum possible payoff thus the player can be assured a payoff of at least the maximin value, regardless of how the others are playing. The player doesn’t have the know the payoffs of the other players in order to choose the maximin move, therefore players can choose the maximin strategy in a simultaneous game regardless of what the other players choose.[9]

A pure Nash equilibrium is when no one can gain a higher payoff by deviating from their move, provided others stick with their original choices. Nash equilibria are self-enforcing contracts, in which negotiation happens prior to the game being played in which each player best sticks with their negotiated move.[10]

Prisoner’s Dilemma is a situation in which 2 players have robbed a bank, been arrested and interrogated separately. The options are to confess (move C) or to remain silent (move S). In this case, if the police were to propose a deal in which if one confesses while the other remains silent, the one confessing serves no time while the other is sentenced to three years. However, neither robber knows what the other will pick and therefore the only Nash equilibria would be for both to remain silent.[10] The table below shows the payoff for each option:

A wife and husband decide independently whether to go to a football game or the ballet. Each person likes to do something together with the other, but the husband prefers football and the wife prefers ballet. The two Nash equilibria and therefore the best responses for both husband and wife are for them to both pick the same leisure activity e.g. (ballet, ballet) or (football, football).[10] The table below shows the payoff for each option:

Retrieved from "http://en.turkcewiki.org/w/index.php?title=Simultaneous_game&oldid=1002280374"
This website is a mirror of Wikipedia, and is not affiliated with the Wikimedia Foundation.
Categories:
Hidden categories: