Jump to navigation Jump to search
For other uses, see Shotgun wedding (disambiguation).

A shotgun wedding is a wedding that is arranged to avoid embarrassment due to premarital sex possibly leading to an unintended pregnancy, rather than out of the desire of the participants. The phrase is an American colloquialism,[1] though it is also used in other parts of the world based on a supposed scenario that the father of the pregnant bride-to-be must resort to using coercion, such as threatening the reluctant groom with a shotgun, to ensure that he follows through with the wedding.[citation needed]

One purpose of such a wedding can be to get recourse from the man for the act of impregnation; another reason is trying to ensure that the child is raised by both parents. In some cases, as in early America and in the Middle East, a major objective was the restoring of social honour to the mother. The practice is a loophole method of preventing the birth of legally illegitimate children, or if the marriage occurs early enough, to conceal the fact that conception occurred prior to marriage. In some societies the stigma attached to pregnancy out of wedlock can be enormous, and coercive means (in spite of the legal defense of undue influence) for gaining recourse are often seen as the prospective father-in-law's "right", and an important, albeit unconventional, coming of age event for the young father-to-be.[citation needed] Often a couple will arrange a shotgun wedding without explicit outside encouragement, and some religious teachings consider it a moral imperative to marry in that situation.[2]

Pre-marital sexual relations remain taboo across all social strata throughout the Middle East. In many cases, fornication is illegal and even a criminal offence. Even when it is not, the social response can be extreme, especially against women who have lost their virginity prior to marriage.

Apart from instances of regional slang, there is no special term for "shotgun weddings" in Arabic. This is because they are not recognised as a regular social phenomenon and because a successful Middle Eastern shotgun wedding is not known to be a shotgun wedding by the guests. 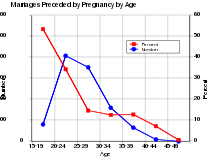 Marriages preceded by pregnancy by age in Japan (2010).

Because of the sexual revolution beginning in the 1960s, the concepts of love, sexuality, procreation and marriage began to separate after being intimately entangled in social consciousness for centuries.[10] However, sexual practice had not always followed social convention, resulting in shotgun or Knobstick weddings. 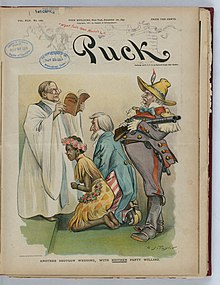 This 1897 political cartoon portrays the U.S. annexation of Hawaii as "Another shotgun wedding, with neither party willing".

Retrieved from "http://en.turkcewiki.org/w/index.php?title=Shotgun_wedding&oldid=922404799"
This website is a mirror of Wikipedia, and is not affiliated with the Wikimedia Foundation.
Categories:
Hidden categories: