Jump to navigation Jump to search
For the sound in English sometimes represented by ĭ, see near-close near-front unrounded vowel.

Short I represents the palatal approximant /j/ like the pronunciation of ⟨y⟩ in yesterday.

Depending on the romanization system in use and the Slavic language that is under examination, it can be romanized as ⟨y⟩ (the most common), ⟨j⟩, ⟨i⟩ or ⟨ĭ⟩ (probably the least common).

Active use of ⟨Й⟩ (or, rather, the breve over ⟨И⟩) began around the 15th and the 16th centuries. Since the middle of the 17th century, the differentiation between ⟨И⟩ and ⟨Й⟩ is obligatory in the Russian variant of Church Slavonic orthography (used for the Russian language as well). During the alphabet reforms of Peter I, all diacritic marks were removed from the Russian writing system, but shortly after his death, in 1735, the distinction between ⟨И⟩ and ⟨Й⟩ was restored. ⟨Й⟩ was not officially considered a separate letter of the alphabet until the 1930s.

Because ⟨Й⟩ was considered to be a vowel and not a consonant, it was not required to take a hard sign when it came at the end of a word in pre-reform orthography.

In Russian, it appears predominantly in diphthongs like /ij/ in широкий (shirokiy 'wide'), /aj/ in край (kray 'end', 'krai'), /ej/ in долей (doley 'portion'), /oj/ in горой (goroy 'mountain'), and /uj/ in буйство (buystvo 'rage'). It is used in other positions only in foreign words, such as Йopк (York, not with ⟨Ё⟩), including fellow Slavic words like Йовович (Yovovich).

In Serbo-Croatian and Macedonian, the Cyrillic letter Јe is used to represent the same sound. Latin-based Slavonic writing systems, such as Polish, Czech and the Latin version of Serbian and Croatian use the Latin letter J (not the letter Y, as in English or French), for that purpose. 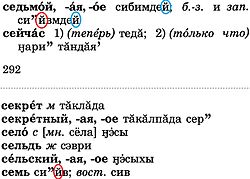 Note that breve in Й may be quite different from ordinary breve, the former having a thinner central part and thicker ends (the opposite holds for ordinary breve). This is often seen in serif fonts, cf. Й (Cyrillic Short I) and Ŭ (Latin U with breve).

Retrieved from "http://en.turkcewiki.org/w/index.php?title=Short_I&oldid=969478252"
This website is a mirror of Wikipedia, and is not affiliated with the Wikimedia Foundation.
Categories:
Hidden categories: