In economics, a shock is an unexpected or unpredictable event that affects an economy, either positively or negatively. Technically, it is an unpredictable change in exogenous factors — that is, factors unexplained by an economic model — which may influence endogenous economic variables.

The response of economic variables, such as production and employment, at the time of the shock and at subsequent times, is measured by an impulse response function.[1]

A technology shock is the kind resulting from a technological development that affects productivity.

If the shock is due to constrained supply, it is termed a supply shock and usually results in price increases for a particular product. Supply shocks can be produced when accidents or disasters occur. The 2008 Western Australian gas crisis resulting from a pipeline explosion at Varanus Island is one example.

An inflationary shock happens when prices of commodities increase suddenly (e.g., after a decrease of government subsidies) while not all salaries are adjusted immediately throughout society (this results in a temporary loss of purchasing power for many consumers); or that production costs begin to exceed corporate revenues (e.g. following energy price hikes). 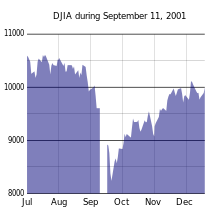 Stock exchanges in the wake of the September 11 attacks. After the initial panic, the DJIA increased quickly for only a slight net decrease.

A demand shock is a sudden change of the pattern of private expenditure, especially of consumption spending by consumers or of investment spending by businesses.

A monetary policy shock occurs when a central bank changes, without sufficient advance warning, its pattern of interest rate or money supply control. A fiscal policy shock is an unexpected change of government spending or taxation amounts.

Retrieved from "http://en.turkcewiki.org/w/index.php?title=Shock_(economics)&oldid=967264517"
This website is a mirror of Wikipedia, and is not affiliated with the Wikimedia Foundation.
Categories:
Hidden categories: