(Redirected from Sharp MZ80K)
Jump to navigation Jump to search 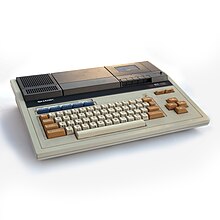 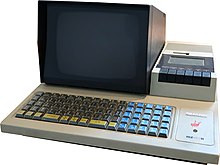 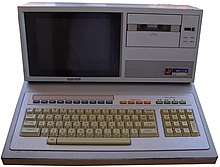 The Sharp MZ is a series of personal computers sold in Japan and Europe (particularly Germany and Great Britain) by Sharp beginning in 1978.

Although commonly believed to stand for "Microcomputer Z80", the term MZ actually has its roots in the MZ-40K, a home computer kit produced by Sharp in 1978 which was based on Fujitsu's 4-bit MB8843 processor and provided a simple hexadecimal keypad for input. This was soon followed by the MZ-80K[1], K2, C, and K2E, all of which were based on 8-bit LH0080A Sharp CPU (compatible to Zilog Z80A) with an alphanumeric keyboard.

From the first Z80 processor-based model to the MZ-2200 in 1983, the MZ computers included the PC, monitor, keyboard, and tape-based recorder in a single unit, similar to Commodore's PET series. It was also notable for not including a programming language or operating system in ROM. This invited a host of third-party companies, starting with Hudson Soft, to produce many languages and OSes for the system. In an era when floppy disk drives were too expensive for most home users, the MZ's built-in cassette tape drive was faster and more reliable than the cassette storage on some competing computers;[2] however, this meant that the MZ series was relatively slow to adopt floppy drives as a standard accessory.

The MZ series is divided into several lines, including the text-based MZ-80K series, the graphics-based MZ-80B series, and the MZ-3500/5500 series, based on a completely different architecture.

In 1982, Sharp's television division released the X1, a completely new computer. The X series proved to outsell Sharp's own MZ series, and in response, Sharp released the MZ-1500/2500 machines, which featured powered-up graphics and sound capabilities. However, this series saw little marketplace success, and eventually the company abandoned the line in favor of the X68000 series.

The MZ name lives on as the initials of two of Sharp's most well-known products: the Mebius line of PCs, and the Zaurus line of personal digital assistants.

The Sharp MZ80K was one of the popular early consumer-level microcomputers, with an architecture based on the Zilog Z80 8-bit microprocessor. It was introduced into Europe in 1979. The machine had 48KB of RAM, 32KB of which was available for user programs (the actual figure was dependent on the memory configuration and the system languages being used). It could run a variety of high-level languages including BASIC, Pascal and FORTRAN, which had to be loaded into RAM before any programming could be undertaken. It could also be programmed directly in assembly code or machine code. The machine had an inbuilt monochrome display and a cassette tape drive. The display, keyboard and cassette drive lifted on hinges to expose the motherboard and circuitry underneath. Graphics capability was primitive, with only preset shapes and icons being available and no native hi-res capability. This was not unusual for a late-1970s vintage microcomputer. The main drawback, however, of the MZ-80K was the non-standard keyboard, which was difficult to use.

The MZ-80K sold well in Europe despite its high price (it retailed at over £500 in 1980), and a large range of software was available, including some Japanese arcade games. It was superseded in 1982 by the MZ-80A machine.

This offshoot of the MZ-80K line was primarily marketed for business use.

A line of business PCs shoehorned into the MZ lineup. All of them feature 5.25-inch floppy disk drives.

Retrieved from "http://en.turkcewiki.org/w/index.php?title=Sharp_MZ&oldid=942938823"
This website is a mirror of Wikipedia, and is not affiliated with the Wikimedia Foundation.
Categories:
Hidden categories: