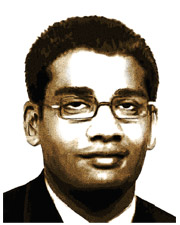 Shanmugam Manjunath (23 February 1978 – 19 November 2005) was a sales officer (grade A officer) for the Indian Oil Corporation who was murdered for sealing a corrupt petrol station in Lakhimpur Kheri, Uttar Pradesh. This incident inspired several students at IIM, IIT and other institutes culminating with the IIM students setting up "The Manjunath Shanmugam Trust".

Manjunath did his initial schooling from Kendriya Vidyalaya, BEML Nagar, Kolar Gold Fields, Karnataka. He finished his 10th in 1993 and 12th std in science stream in 1995 from the same school. Later on he did his Computer Science Engineering degree from Sri Jayachamarajendra College of Engineering, Mysore, and an MBA from Indian Institute of Management Lucknow.

Opposition to corruption and murder[edit]

While working for the Indian Oil Corporation in Lucknow, he ordered two petrol pumps at Lakhimpur Kheri sealed for selling adulterated fuel for three months. When the pump started operating again a month later, Manjunath decided to conduct a surprise raid around 19 November 2005.

Having not heard from his son for three days, at around 9 that night, his father, M Shanmughan, sent an SMS: "How are you?". There was no reply because that night, during his inspection, Manjunath had been shot dead in the town of Gola Gokarannath in Lakhimpur Kheri. His body, riddled with at least six bullets, was found in the backseat of his own car, which was being driven by two employees of the petrol pump. Both were arrested and the main accused, pump-owner Pawan Kumar ('Monu') Mittal, was held on 23 November along with seven others.

Manjunath's death came close on the heels of the assassination of Satyendra Dubey (27 November 1973 – 27 November 2003), suspected to have been murdered for similar reasons (fighting corruption). Following the murder, there was immense media spotlight on the case. S. Manjunath's batchmates from IIM Lucknow (where he was affectionately called machan) also kept the story alive.

Petrol pump owner Pawan Kumar Mittal, the main accused in the sensational murder, was sentenced to death by the Sessions Court, while the other seven accused were given life imprisonment on 26 March 2007.[2]

The convicts appealed in 2011. The matter has come up for hearing, with the first hearing starting on 19 November 2014. This was the ninth anniversary of Manjunath's death. On 11 March 2015, the Supreme Court dismissed all the convicts' appeals, holding that the prosecution had proved the chain of events, needed for a case of circumstantial evidence. They will continue serving their life sentences.

A pan IIM initiative, "The Manjunath Shanmugam Trust" was registered on 23 February 2006, Manjunath's birth anniversary. With immediate objectives of fighting the case, they have a broader agenda of improving governance in Indian public life.

The Manjunath Shanmugam Integrity Award carries a citation and a Rs. One Lakh Cash Award; to honour those who have reported and worked to rectify systemic corruption. The first Manjunath Shanmugam Integrity Award was awarded on 24 March 2007 to Prof. R.P. Singh, Vice-Chancellor Lucknow University for his extraordinary courage in taking on criminals and politicians to clean up Lucknow University and implement the Lyngdoh Committee recommendations. The award was presented in a public function by chairman and Chief Mentor of Infosys Mr. NR Narayana Murthy.

Krishak Mukti Sangram Samiti president Akhil Gogoi received the prestigious 2nd Shanmugam Manjunath Integrity Award from the Magsaysay awardee Kiran Bedi at a function held on 28 March 2008 at the IIT Delhi Seminar Hall. Mr Gogoi who hails from upper Assam's Golaghat district has been awarded for his fight against corruption. One of the finalists, IAS officer Sri M.N. Vijayakumar, was not allowed to attend the function by his senior, Sudhakar Rao (Husband of former foreign secretary of India Nirupama Rao). This was widely criticised by his wife Jayashree JN and was also brought to the notice of the President of India.[5]

Institute for Research and Documentation in Social Sciences (IRDS)[6] has also been awarding the S Manjunath award for Management for its contributions to the cause of fighting corruption in corporate management.[7]

Non-governmental organisations from Lucknow, Institute for Research and Documentation in Social Sciences (IRDS) and National RTI Forum are pursuing the demand of awarding one of the Padma Shri Awards by the Government of India to both Manjunath Shanmugam and Satyendra Dubey, the IIT Kanpur graduate who was murdered in similar circumstances while working for the National Highway Authority of India. They have already submitted a petition to the President and started an online campaign on social networking sites and an online petition, where more than thousand people already joined.[8][9][10]

A biopic on Manjunath, titled Manjunath, directed by Sandeep Varma, was released on 9 May 2014.[11] Portions of the film were shot in his almamater IIM, Lucknow campus.[12] Ahead of the release, the trailer of the film was shown at the alumni meet on the IIM-L campus in December 2013.[13] The movie had a special screening on 10 May 2014 for IIM alumni in Singapore as part of the IIMPact 2014 launch event (http://www.iimpactglobal.org[14]).

Famous Indian musician Rabbi Shergill has dedicated one stanza in his song titled 'Bilqis (Jinhe Naaz Hai)' from album Avengi Ja Nahin to Shanmughan Manjunath. This song is a dedication to all those who died in vain or while supporting some cause (anti-corruption).

Retrieved from "http://en.turkcewiki.org/w/index.php?title=Shanmugam_Manjunath&oldid=1090560705"
This website is a mirror of Wikipedia, and is not affiliated with the Wikimedia Foundation.
Categories:
Hidden categories: