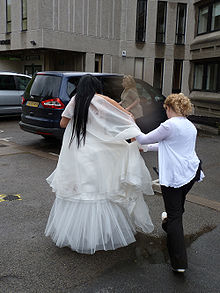 Officers from the UK Border Agency lead away the would-be bride in an operation to prevent a suspected sham marriage.

A sham marriage or fake marriage is a marriage of convenience entered into without intending to create a real marital relationship. This is usually for the purpose of gaining an advantage from the marriage.

Definitions of sham marriage vary by jurisdiction, but are often related to immigration. The essential point in the varying definitions is whether the couple intend to live in a real marital relationship, to establish a life together.[1] A typical definition by the UK Home Office in 2015:[2]

While referred to as a "sham" or "fake" because of its motivation, the union itself is legally valid if it conforms to the formal legal requirements for marriage in the jurisdiction. Arranging or entering into such a marriage to deceive public officials is in itself a violation of the law of some countries, for example the US.

After a period, couples often divorce if there is no purpose in remaining married.

Sham marriages are distinct from marriage fraud, which is a type of romance scam, in which one spouse is unwittingly taken advantage of by the foreign spouse who feigns romantic interest, typically in order to obtain a residence permit or for money.[3][4][5]

Common reasons for sham marriages are to gain immigration,[6][7] residency, work, or citizenship rights for one of the spouses.

There have been cases of people entering into a sham marriage to avoid suspicion of homosexuality or bisexuality. For example, Hollywood studios had allegedly requested homosexual actors, such as Rock Hudson, to conceal their homosexuality in a so-called lavender marriage.

Since the introduction of stricter modern immigration laws in First World countries,[8] sham marriages have become a common method to allow a foreigner to reside, and possibly gain citizenship, in the more desirable country of the spouse. The couple marries with knowledge that the marriage is solely for the purpose of obtaining the favorable immigration status, and without intending to live as a couple. This is frequently arranged as a business transaction with payment of a sum of money, and occurs more commonly with foreigners already in the country.[citation needed]

In the UK the Border Agency issued guidance to clergy in April 2011 to help prevent sham marriages intended only to gain the right to reside. English and Welsh clergy may perform a marriage, according to the law there. They have been advised not to offer to publish banns for any marriage where one partner is from outside the European Union. Instead, the couple were to be asked to apply for a licence; if a member of the clergy is not satisfied that a marriage is genuine, they must make that clear to the person responsible for granting the licence.[9]

Since the Home Office hostile environment policy started in 2012, there has been criticism in the UK of heavy-handed action affecting genuine marriages. Genuine weddings have been interrupted, and dawn raids have been made to check whether couples are sharing a bed. People have been detained for months on wrongly being accused of being in a sham marriage. In 2018, 1,618 marriages reported by registrars as being suspicious were investigated; the Home Office refused to say how many were found to be sham.[10]

A senior registrar in Ireland said in August 2010 that he estimated 15% of civil marriages to be bogus, for the purpose of gaining residency.[11]

In United States immigration law, marriage not made in good faith and for purposes of immigration fraud is a felony, subject to a penalty of a US$250,000 fine and five-year prison sentence on the citizen, and deportation of the foreigner.[12] The INS and the Justice Department said that they did not have accurate numbers on the rate of attempted marriage fraud.[13] In the 2009 fiscal year, 506 of the 241,154 petitions filed were denied for suspected fraud, a rate of less than 0.09%.[14]

In Canada, legislation on sham marriages was strengthened in 2012.[15] Continuous controversy arose regarding the issue; Canadian officials have been accused both of being too harsh and harassing couples and of being too lenient in deciding what is a genuine relationship.[16] In addition, there have been objections to the policy from women's organizations, which argued that the new policy which requires the sponsor and the new spouse to live in a "genuine relationship" for two years endangers women who are victims of domestic violence. Although there is an exception to this rule in cases of abuse,[17] the policy has been accused of being too weak (as abuse is difficult to prove).[18]

Retrieved from "http://en.turkcewiki.org/w/index.php?title=Sham_marriage&oldid=928302578"
This website is a mirror of Wikipedia, and is not affiliated with the Wikimedia Foundation.
Categories:
Hidden categories: