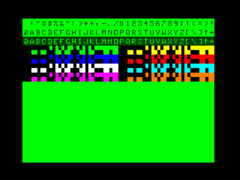 An example of some semigraphical characters.

Text-based semigraphics or pseudographics is a primitive method used in early text mode video hardware to emulate raster graphics without having to implement the logic for such a display mode.

There are two different ways to accomplish the emulation of raster graphics. The first one is to create a low-resolution all points addressable mode using a set of special characters with all binary combinations of a certain subdivision matrix of the text mode character size; this method is referred to as block graphics, or sometimes mosaic graphics.[citation needed]

The second one is to use special shapes instead of glyphs (letters and figures) that appear as if drawn in raster graphics mode, sometimes referred to as semi- or pseudo-graphics; an important example of this is box-drawing characters.

Semigraphical characters (including some block elements) are still incorporated into the BIOS of any VGA compatible video card, so any PC can display these characters from the moment it is turned on, even when no operating system is yet loaded. Single and double lines are still often drawn with this method when the system uses text mode; for example when running the BIOS setup program.

Many of these historical ideas have been adopted into Unicode, in, for example in the Block Elements, Box Drawing and Geometric Shapes Unicode blocks.[1]

For example, an 8×12 character could be divided vertically in two halves and horizontally in three parts, and then assigning "ink" and "background" values to the elements of the matrix in a binary pattern, corresponding to the binary sequence of the position in the font table of a 2×3 mosaic matrix of so-called squots (square dots).[2] Less often used versions use a 1×6 "matrix", in which case these six "pixels" are sometimes referred to as sixels.[3] But dividing an 8×8 character in 2×2 "pixels" was also common (it was, for example, used in the Sinclair ZX81). Sometimes the text semigraphical characters are simply incorporated into the systems font-set, sometimes special video hardware is used to directly convert the bit-pattern from video memory into the pixels. In rare cases a character matrix wasn't dividable vertically by three, for example in an 8×8 matrix the mosaic is sometimes divided so that it uses a 3:2:3 scan line scheme. The Galaksija's graphics mode is an example, although with a 4:5:4 scheme the distortion effect was minimal.[4] 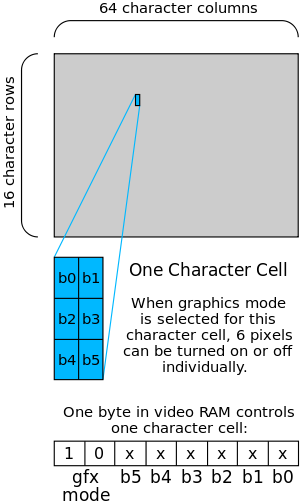 Layout of characters and pixels on the TRS-80 display

The seminal use of this technology was in the TRS-80 where the only way to get discrete pixels on the screen that could be turned on and off individually, (all points addressable) was by the use of a 2×3 pixel matrix of block graphics. In the case of the TRS-80 these block graphics were not incorporated into a font ROM, as later became the norm, but were generated directly from the logic pattern of six bits from the video RAM using a dedicated circuit made from logic gates.[5]

If the system also supported color, the color resolution of the resulting pixels was normally equal to the text resolution, often leading to attribute clash as the color of a pixel could not be changed on a per pixel basis, but only to one "ink", and one "background" color for all pixels within a character position.

Sometimes the number of characters in the font, dedicated to block graphics, could be halved if the system also supported an "invert" attribute, as half the characters in a full block graphics font set are the logical inverse of the other half of the font set. Other tricks that were used to decrease the number of needed characters, was to use a space for the "all bits are zero" character, and to use character 7F hex for the "all bits are on" character, as character 7F hex (decimal 127) was often defined as an "all pixels on" character (this because of the fact that when using papertape punching out all seven holes, created the 7F hex "byte" which was considered to be the "DEL" or "rub-out" character).[6] The assignment in ASCII of the rub-out character (to the code point 127) lead designers of VDUs to use "rub-out" for a character square filled with "ink", which was often used to represent the cursor.

Examples of the use of block graphics[edit]

Other examples of systems that relied on the use of block graphics are:

Semigraphical characters are also characters in a font that are intended to give the impression that a system can support high resolution graphics, while in fact the system operates in text mode. Characters such as box-drawing characters, circles and dots, card symbols like ♠, ♣, ♥ and ♦, and "graphical building block" geometric shapes such as triangles gave such systems that appearance.

One of the first systems that used such characters, the canonical example that others followed, was the Commodore PET, which had many of them within its PETSCII font set.[11] The original PET relied to such a degree on these characters that it printed them on its keyboard, as can be seen here, an example that other systems soon copied.

Some of the systems that had a programmable font set, but did not have a real high resolution raster graphics hardware, came with default character sets to be uploaded in character set RAM, and these sets often incorporated the ideas mentioned here, although it was often also the case that dedicated semigraphical characters were defined as needed.

Systems that relied on semigraphical characters[edit]

Examples of systems that relied heavily on semigraphical characters for their graphics are:

Retrieved from "http://en.turkcewiki.org/w/index.php?title=Semigraphics&oldid=918780354"
This website is a mirror of Wikipedia, and is not affiliated with the Wikimedia Foundation.
Categories:
Hidden categories: