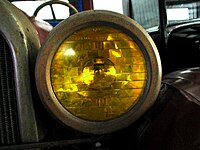 One of the first optic headlamp lenses, the Corning Conaphore made of selective yellow "Noviol" glass.

The intent of selective yellow is to improve vision by removing short, blue to violet wavelengths from the projected light. These wavelengths are difficult for the human visual system to process properly, and they cause perceived dazzle and glare effects in rain, fog and snow.[7] Removing the blue-violet portion of a lamp's output to obtain selective yellow light can entail filter losses of around 15%,[8] though the effect of this reduction is said to be mitigated or countervailed by the increased visual acuity available with yellow rather than white light in bad weather.[7]

A research experiment done in the UK in 1968 using tungsten (non-halogen) lamps found that visual acuity is about 3% better with selective yellow headlamps than with white ones of equal intensity.[9] Research done in the Netherlands in 1976 concluded that yellow and white headlamps are equivalent as regards traffic safety, though yellow light causes less discomfort glare than white light.[10] Researchers note that tungsten filament lamps emit only a small amount of the blue light blocked by a selective-yellow filter,[9] so such filtration makes only a small difference in the characteristics of the light output,[7] and suggest that headlamps using newer kinds of sources such as metal halide (HID) bulbs may, through filtration, give off less visually distracting light while still having greater light output than halogen ones.[7]

The UNECE Regulations formally define selective yellow in terms of the CIE 1931 colour space as follows:

For front fog lamps, the limit towards white is extended:

The entirety of the basic selective yellow definition lies outside the gamut of the sRGB colour space—such a pure yellow cannot be represented using RGB primaries. The colour swatch above is a desaturated approximation, created by taking the centroid of the standard selective yellow definition at (0.502, 0.477) and moving it towards the D65 white point, until it meets the sRGB gamut triangle at (0.478, 0.458).

Here are images of a car equipped with selective yellow headlamps and driving lamps, a set of fog lamps designed to produce selective yellow light, and of the light beam emitted from the same lamps:

Retrieved from "http://en.turkcewiki.org/w/index.php?title=Selective_yellow&oldid=956941802"
This website is a mirror of Wikipedia, and is not affiliated with the Wikimedia Foundation.
Categories:
Hidden categories: