Jump to navigation Jump to search
This article is about the discipline within the field of international relations. For the study of security management, see security management studies.
For the journal, see Security Studies (journal). 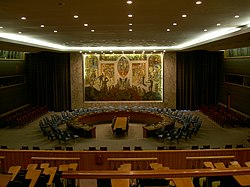 Security studies, also known as international security studies, is traditionally held to be an academic sub-field of the wider discipline of international relations.[1] The field rapidly developed within international relations during the Cold War, and examples from the era can be considered to include the academic works of mid-20th century Realist political scientists such as Thomas Schelling[2] and Henry Kissinger,[3] whose works focused primarily on nuclear deterrence. While the field is mostly contained within political science and public policy programs, it is increasingly common to take an interdisciplinary approach that incorporates knowledge from the fields of history, geography (stressing classical geopolitics), military sciences, and criminology.

While the field (much like its parent field of international relations) is often meant to educate students who aspire to professional careers in think tanks, consulting, defense contractors, Human Rights NGOs or in government service positions focused on diplomacy, foreign policy, conflict resolution and prevention, emergency and disaster management, intelligence, and defense, it can also be tailored to students seeking to professionally conduct academic research within academia, or as public intellectuals, pundits or journalists writing about security policy.

At its core, international security studies, as an area of inquiry, takes organized violence as its focus, and the steps individuals and aggregations of individuals can take to both employ organized violence effectively and, much more importantly, to protect themselves from organized violence (accumulation of knowledge in the former being essential for the accumulation of knowledge in the latter). Thus subjects can range from the micro—weapons types, effectiveness, tactics, human-weapons interfaces, individual and group motivations—to the macro; including the causes of war, nuclear strategy, military doctrine, defense spending, and conventional and unconventional warfare strategies.

More recently, however, these traditional approaches to security have been supplemented (one leaves the utility open to argument) by variants such as critical security studies, and the Copenhagen School. Clearly useful contributions to our understanding of insecurity and security have also come from constructivism (international relations), peace studies and critical theory. As implied by the close association of the Cold War with the advent and establishment of international security studies as such, broader historical trends (or rather perceptions of them) created the openings that these alternative schools have sought, with mixed effect, to provide an array of theoretical foundations.

Contemporary security studies is therefore as contested a field of inquiry as it is both interesting and important.[4]

Some universities with academic programs in security studies[edit]

Retrieved from "http://en.turkcewiki.org/w/index.php?title=Security_studies&oldid=964882476"
This website is a mirror of Wikipedia, and is not affiliated with the Wikimedia Foundation.
Categories: