Eastwood was born Scott Clinton Reeves[2] on March 21, 1986 at the Community Hospital of the Monterey Peninsula in Monterey, California.[3] He is the son of actor-director Clint Eastwood and flight attendant Jacelyn Reeves, and is the fifth of Clint's eight children.[4][5][6][7] He has a younger sister named Kathryn who was born two years after him in 1988,[5][8] and a number of paternal half-siblings, including Kimber Tunis, Kyle Eastwood, Alison Eastwood, Francesca Eastwood and Morgan Eastwood. Eastwood was raised in Carmel-by-the-Sea until age ten,[3] after which he moved with his mother to Hawaii.[9] He spent four years in Hawaii before returning to California, where he graduated from Carmel High School.[3][10] He attended Loyola Marymount University in Los Angeles, where he graduated with a communications degree in 2008.[11] 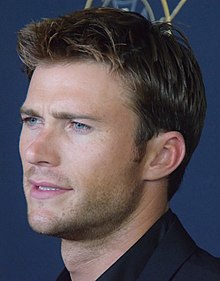 Eastwood began his career by using his given last name to avoid nepotism, although there is another actor named Scott Reeves. "I've auditioned for pretty much every one of my father's movies", he said in 2015, stating that he was rejected for the Clint Eastwood-directed American Sniper.[12] He briefly appeared in his father's 2008 film Gran Torino, and played Joel Stransky in Invictus.

In April 2010, Eastwood played the lead role in Enter Nowhere,[13] had a supporting role in David Ayer's 2014 film Fury, appeared in the 2015 music video for Taylor Swift's "Wildest Dreams", and starred alongside Britt Robertson in the 2015 film adaptation of Nicholas Sparks' novel The Longest Ride.[14]

In 2016, Eastwood played Lieutenant GQ Edwards in the film Suicide Squad, an adaptation of the DC Comics series.[12] Also that year, he starred alongside Joseph Gordon-Levitt and Shailene Woodley in the biographical drama film Snowden, directed by Oliver Stone, which was released in September.

In 2017, he played a special agent in the action film The Fate of the Furious, and starred in Overdrive, a thriller film which was shot in Paris and Marseille.[15][16] In 2018, he starred as Nate Lambert in the science fiction follow-up Pacific Rim: Uprising.[17][18]

In August 2016, Scott opened up to the media about the death of his former girlfriend, Jewel Brangman, killed September 24, 2014 by a faulty airbag during a minor car accident.[19][20]

Scott bears a striking resemblance to his father, noted in the media when he dressed up as the character played by Clint Eastwood in The Good, the Bad and the Ugly for a Halloween charity event in 2016.[21]

Retrieved from "http://en.turkcewiki.org/w/index.php?title=Scott_Eastwood&oldid=965349621"
This website is a mirror of Wikipedia, and is not affiliated with the Wikimedia Foundation.
Categories:
Hidden categories: