Sawbridgeworth is a small town and civil parish in Hertfordshire, England, close to the border with Essex. It is 12 miles (19 km) east of Hertford and 9 miles (14 km) north of Epping.

Underlying the town at some depth is the London Clay stratum, with a thick layer of Boulder clay laid down during the ice ages, including the Anglian. The soil on top of this is a loam, with erratics of Hertfordshire puddingstone conglomerate found around the town.

Prior to the Norman conquest, most of the area was owned by the Saxon Angmar the Staller.[citation needed]

The Manor of "Sabrixteworde" (one of the many spellings previously associated with the town) was recorded in the Domesday Book. After the Battle of Hastings it was granted to Geoffrey de Mandeville I by William the Conqueror. Local notables have included John Leventhorpe, an executor of both King Henry IV and King Henry Vs' wills and Anne Boleyn, who was given the Pishiobury/Pishobury estate, located to the south of the town. 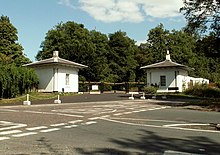 Entrance to Great Hyde Hall; it was known simply as Hyde Hall when it was held by the Jocelyn family in the 16th and 17th centuries

The mansion and surrounding land was acquired by Sir Walter Lawrence, the master builder, in the 1920s. In 1934, he instituted the Walter Lawrence Trophy for the fastest century in county cricket.[2] He built a cricket ground and pavilion in the grounds where the great and the good of the cricket world came to play against Sir Walter's home team, which often included his three sons: Jim, Guy and Pat. Sir Walter also had two daughters: Molly and Gipsy. Great Hyde Hall was sold in 1945 and became a school. It is a Grade II* listed building and has now been divided into housing.[3]

Much of the town centre is a conservation area; many of the buildings date from the Tudor, Stuart and Georgian periods.

Great St Mary's Church is a Grade I listed building; "of special interest as a substantially unaltered large medieval parish church, typical of the Hertfordshire type, and with an outstanding collection of memorials of the highest artistic quality".[4] It was originally built in the 13th century (although a church on the site existed in Saxon times) and includes a Tudor tower containing a clock bell (1664) and eight ringing bells, the oldest of which dates from 1749.[5] It is unclear why it is "Great" St Mary's. Ralph Jocelyn of Hyde Hall, who was twice Lord Mayor of London, in 1464 and 1476, is buried here; images of many of his family and other locals have been engraved on brass, and hence the church is popular for enthusiasts of brass rubbing. The ghost of Sir John Jocelyn, known for his love of horses, is reputed to appear riding a white horse on the old carriage drive every 1 November.[6]

The town's prosperity came from the maltings, some of which now house antiques centres. Among the maltsters were George Fawbert and John Barnard; in 1839 they set up the Fawbert and Barnard charity to fund local children and their education, funding a local infant school that still exists today.

By the time of the Norman conquest, or soon after, Sawbridgeworth's rich farming land was fully developed for cultivation as was possible with the means available at the time: it was the richest village community in the county. It is, then, hardly surprising that many important medieval families had estates here. The land was divided among them, into a number of manors or distinct estates; the Lord of each manor had rights not only over this land but also over the people who farmed it. The number of manors increased during the Middle Ages, by a process of subinfeudation, that is the granting out of a part of an existing manor to a new owner so that the new manor was created. Many manors sprang from the original Domesday Book holding of the de Mandeville family. The first came to be called Sayesbury manor, from the de Say family who inherited it from the de Mandeville's in 1189. The many important people who held these manors built themselves houses with hunting parks around them; when they died their tombs enriched the parish church, so that today St Mary's has one of the finest collections of church monuments in the country.

During the Second World War RAF Sawbridgeworth, which is not in the civil parish, operated Supermarine Spitfires, Westland Lysanders, North American Mustangs and de Havilland Mosquito, among other types - for a complete history of the airfield, see the book Where the Lysanders were ....., by Paul Doyle, published in 1995 by Forward Airfield Research Publishing.[7] The Walter Lawrence & Son Ltd joinery works, located between the canal and the railway, built over 1,000[citation needed] Mosquito fuselage shells and wing skins for de Havilland during the Second World War.[8] Subsequently, it reverted to making joinery and doors for the building trade. The joinery works was closed in about 1982 and houses were built on the site.

Sawbridgeworth is governed by Hertfordshire County Council,[9] as well as being part of East Hertfordshire District Council. Hertfordshire has a two-tier system of administration, with a county council and district councils. The town council currently has 12 councillors, covering both Sawbridgeworth and Spellbrook.

Sawbridgeworth has its own on-call fire station, situated in Station Road. It is part of Hertfordshire Fire and Rescue Service.[10]

Sawbridgeworth has been twinned with Bry-sur-Marne in France since 1973.

In Parliament, it is in the Hertford and Stortford constituency. Since the election of May 2005 Sawbridgeworth is represented by Mark Prisk, a Conservative.

The village of Lower Sheering, is across the county boundary in to Essex, and adjoins Sawbridgeworth along its eastern edge, east of the railway station and of the River Stort. It shares a CM21 Sawbridgeworth postal code but for government and all other purposes is in the Epping Forest district of Essex, and under Essex County Council control

Sawbridgeworth has a secondary school, the Leventhorpe Academy, which also offers a public swimming pool and leisure centre. There is also one primary school, one junior school and one infant school in Sawbridgeworth.

Sawbridgeworth Cricket Club field five senior sides on a Saturday and seven colts sides, from ages nine to fifteen. The 1st XI plays in the Home Counties Premier Cricket League, and the other league sides play in the Hertfordshire Cricket League. The main ground is Town Fields, situated behind Bell Street. The second ground is at Leventhorpe Academy.

Sawbridgeworth has tennis and bowls clubs.

Sawbridgeworth is home to 309 Squadron of the Air Training Corps.[11]

The A1184 runs through the town. The River Stort Navigation flows north/south along the eastern edge of the town, parallel to the trainline, and past the Maltings.

The town is served by Sawbridgeworth railway station, located on the West Anglia Main Line between London Liverpool Street and Cambridge.

There are bus services to Harlow, Bishops Stortford, and Stansted Airport.

Retrieved from "http://en.turkcewiki.org/w/index.php?title=Sawbridgeworth&oldid=962049716"
This website is a mirror of Wikipedia, and is not affiliated with the Wikimedia Foundation.
Categories:
Hidden categories: