A satellite campus or branch campus or regional campus is a campus of a university or college that is physically at a distance from the original university or college area. This branch campus may be located in a different city, state, or country, and is often smaller than the main campus of an institution. The separate campuses may or may not be under the same accreditation and share resources or they share administrations but maintain separate budgets, resources, and other governing bodies.

In many cases, satellite campuses are intended to serve students who cannot travel far from home for college because of family responsibilities, their jobs, financial limitations, or other factors. The availability of branch campuses may increase higher education enrollment by nontraditional students.[1]

Electronic communications technology has helped to facilitate the operation of satellite campuses. Classes taught at one campus can be transmitted to other locations via distance education, students at branch campuses can access library materials on the main campus electronically, and technology allows institutions to administer registration, admissions, and financial aid transactions remotely.[1]

There are several regional satellite or branch campus consortia but only one national association in the United States. The National Association of Branch Campus Administrators, NABCA seeks to unify higher education officials, working to advance scholarship, provide research opportunities, and facilitate networking events, both online and at a national conference each year.[6] 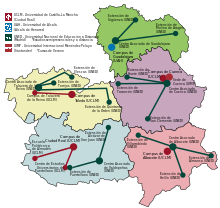 The Farm School in Tennessee allows homeschooling families to affiliate with it through a "Satellite Campuses" program. This program enables homeschooled children to be enrolled in a state-recognized school that is not affiliated with any religious denomination.[16]

Retrieved from "http://en.turkcewiki.org/w/index.php?title=Satellite_campus&oldid=934681850"
This website is a mirror of Wikipedia, and is not affiliated with the Wikimedia Foundation.
Categories:
Hidden categories: