Sardar Vallabhbhai Patel National Police Academy (SVPNPA) is the civil service training institution in India. The institute trains Indian Police Service (IPS) officers before they are sent to their respective state cadres to carry out their duties. The academy is in Hyderabad, Telangana, India.[2]

The academy was established on 15 September 1948 in Mount Abu, Rajasthan as the Central Police Training College (CPTC). In 1967, the Institution was renamed as the National Police Academy (NPA). Later, in 1974, it was named after India's former Deputy Prime Minister Sardar Vallabhbhai Patel who was the man responsible for creating the All India Services and for establishing a training institution to train IPS officers. In 1975, the Academy moved to its current abode at Hyderabad.[4]

The National Police Academy (NPA) is situated on the Hyderabad - Bangalore highway, 8 km from the city. It is spread over 277 acres.[5]

It trains officers of the Indian Police Service, who have been selected through the All-India Civil Services Examination. The trained officers will be posted as Assistant Superintendent of Police (ASP) in their respective states under whom the other sub-ranks of police force will be working.[6] The recruitment of sub-ranks such as constables, sub-inspectors, inspectors, Deputy Superintendent of Police is each state's prerogative and will be done by respective state director generals of police. The IPS cadre is controlled by the Home Ministry of the Government of India and the officer of this service can only be appointed or removed by an order of the President of India. 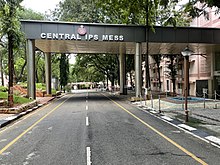 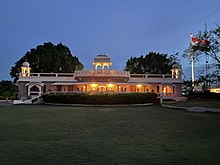 View of the Rajasthan Bhavan situated within the Academy 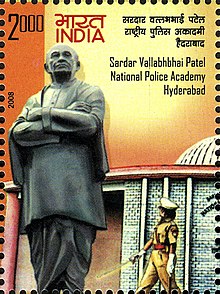 In recognition of the outstanding achievements of the academy and its service to the nation, the academy received the President's Colours on its 40th anniversary on 15 September 1988.[7]

Retrieved from "http://en.turkcewiki.org/w/index.php?title=Sardar_Vallabhbhai_Patel_National_Police_Academy&oldid=1090259831"
This website is a mirror of Wikipedia, and is not affiliated with the Wikimedia Foundation.
Categories:
Hidden categories: