Sand mining is the extraction of sand, mainly through an open pit but sometimes mined from beaches and inland dunes or dredged from ocean and river beds. Sand is often used in manufacturing, for example as an abrasive or in concrete. It is also used on icy and snowy roads usually mixed with salt, to lower the melting point temperature, on the road surface. Sand can replace eroded coastline.[1] Some uses require higher purity than others; for example sand used in concrete must be free of seashell fragments.

Sand mining presents opportunities to extract rutile, ilmenite and zircon, which contain the industrially useful elements titanium and zirconium. These minerals typically are found in ordinary sand deposits and are separated by water elutriation.

Sand mining is a direct cause of erosion, and impacts the local wildlife.[2] Various animals depend on sandy beaches for nesting clutches, and mining has led to the near extinction of gharials (a species of crocodile) in India. Disturbance of underwater and coastal sand causes turbidity in the water, which is harmful for organisms like coral that need sunlight. It can also destroy fisheries, financially harming their operators.

Removal of physical coastal barriers, such as dunes, sometimes leads to flooding of beachside communities, and the destruction of picturesque beaches causes tourism to dissipate. Sand mining is regulated by law in many places, but is often done illegally.[3] Globally, it is a $70 billion industry, with sand selling at up to $90 per cubic yard.[4]

Sand mine in the Czech Republic.

In the 1940 mining operations began on the Kurnell Peninsula (Captain Cook's landing place in Australia) to supply the expanding Sydney building market. It continued until 1990 with an estimate of over 70 million tonnes of sand having been removed. The sand has been valued for many decades by the building industry, mainly because of its high crushed shell content and lack of organic matter, it has provided a cheap source of sand for most of Sydney since sand mining operations began. The site has now been reduced to a few remnant dunes and deep water-filled pits which are now being filled with demolition waste from Sydney's building sites. Removal of the sand has significantly weakened the peninsula's capacity to resist storms. Ocean waves pounding against the reduced Kurnell dune system have threatened to break through to Botany Bay, especially during the storms of May and June back in 1974 and of August 1998.[5] Sand Mining also takes place in the Stockton sand dunes north of Newcastle and in the Broken Hill region in the far west of the state.

A large and long-running sand mine in Queensland, Australia (on North Stradbroke Island) provides a case study in the (disastrous) environmental consequences on a fragile sandy-soil based ecosystem, justified by the provision of low wage casual labor on an island with few other work options.[6] The Labor state government pledged to end sand mining by 2025, but this decision was overturned by the LNP government which succeeded it. This decision has been subject to an allegation of corrupt conduct.[7]

Sand mining contributes to the construction of buildings and development. However, the negative effects of sand mining include the permanent loss of sand in areas, as well as major habitat destruction.

Sand mining is a practice that is becoming an environmental issue in India. Environmentalists have raised public awareness of illegal sand mining in the states of Maharashtra, Madhya Pradesh[8] and Goa of India.[9][10][11][12][13] Conservation and environmental NGO Awaaz Foundation filed a public interest litigation in the Bombay High Court seeking a ban on mining activities along the Konkan coast.[13] Awaaz Foundation, in partnership with the Bombay Natural History Society also presented the issue of sand mining as a major international threat to coastal biodiversity at the Conference of Parties 11, Convention on Biological Diversity, Hyderabad in October 2012.[14] [15] D. K. Ravi, an Indian Administrative Service officer of the Karnataka state, who was well known for his tough crackdown on the rampant illegal sand mining in the Kolar district, was found dead at his residence in Bengaluru, on March 16, 2015. It is widely alleged that the death is not due to suicide but the handiwork of the mafia involved in land grabbing and sand mining.[16][17]

Recently, activists and local villagers have protested against sand mining on Sierra Leone's Western Area Peninsular. The activity is contributing to Sierra Leone's coastal erosion, which is proceeding at up to 6 meters a year.[18]

The current size of the sand mining market in the United States is slightly over a billion dollars per year. The industry has been growing by nearly 10% annually since 2005 because of its use in hydrocarbon extraction. The majority of the market size for mining is held by Texas and Illinois.[19]

Silica sand mining business has more than doubled since 2009 because of the need for this particular type of sand, which is used in a process known as hydraulic fracturing. Wisconsin is one of the five states that produce nearly 2/3 of the nation’s silica. As of 2009, Wisconsin, along with other northern states, is facing an industrial mining boom, being dubbed the "sand rush" because of the new demand from large oil companies for silica sand. According to Minnesota Public Radio, "One of the industry's major players, U.S. Silica, says its sand sales tied to hydraulic fracturing nearly doubled to $70 million from 2009 to 2010 and brought in nearly $70 million in just the first nine months of 2011."[20] According to the Wisconsin Department of Natural Resources (WDNR), there are currently 34 active mines and 25 mines in development in Wisconsin. In 2012, the WDNR released a final report on the silica sand mining in Wisconsin titled Silica Sand Mining in Wisconsin. The recent boom in silica sand mining has caused concern from residents in Wisconsin that include quality of life issues and the threat of silicosis. However, these are issues that the state has no authority to regulate. According to the WDNR (2012) these issues include noise, lights, hours of operation, damage and excessive wear to roads from trucking traffic, public safety concerns from the volume of truck traffic, possible damage and annoyance resulting from blasting, and concerns regarding aesthetics and land use changes.

As of 2013, industrial frac sand mining has become a cause for activism, especially in the Driftless Area of southeast Minnesota, northeast Iowa and southwest Wisconsin. 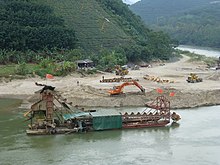 A sand mining operation in the Red River, in Jinping County, Yunnan

Much sand is extracted by dredges from the bottom of rivers such as the Red River in Yunnan, or quarried in dry river beds. Due to the large demand for sand for construction, illicit sand mining is not uncommon.[21]

Retrieved from "http://en.turkcewiki.org/w/index.php?title=Sand_mining&oldid=935710871"
This website is a mirror of Wikipedia, and is not affiliated with the Wikimedia Foundation.
Categories:
Hidden categories: