Jump to navigation Jump to search
This article is about the color. For other uses, see Saffron (disambiguation).

Saffron is an orange color, resembling the color of the tip of the saffron crocus thread, from which the spice saffron is derived.[2][3]

The first recorded use of saffron as a color name in English was in 1200.[4] It is considered as one of the important colours in Sanatan along with others such as red, blue and white, in which it is known as Bhagwa. The color has some significance in Buddhism; it is worn by the monks of the Theravada tradition. It is also an important symbolic color in India, where it was chosen as one of the three colors of the Indian national flag after independence in 1947.

In nature and culture[edit]

Flag of the Sikh religion- the Sikh - Nishan Sahib.

Bhagwa Dhwaj, used as the flag of the Maratha Empire.

Cymon and Iphigeneia c. 1884 by Frederic Leighton - saffron suffuses the canvas at sunrise

Homer's Iliad : Now when Dawn in robe of saffron was hastening from the streams of Okeanos, to bring light to mortals and immortals, Thetis reached the ships with the armor that the god had given her. (19.1)[10]

Aurora now had left her saffron bed,
And beams of early light the heav'ns o'erspread,
When, from a tow'r, the queen, with wakeful eyes,
Saw day point upward from the rosy skies.[11] 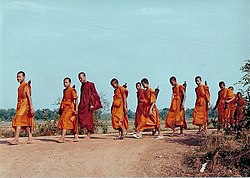 Buddhist monks in the Theravada tradition

Displayed at right is the color rajah.

Rajah is a bright deep tone of saffron.

Retrieved from "http://en.turkcewiki.org/w/index.php?title=Saffron_(color)&oldid=941260199"
This website is a mirror of Wikipedia, and is not affiliated with the Wikimedia Foundation.
Categories:
Hidden categories: