Jump to navigation Jump to search
"SBUS" redirects here. For the former US national bank, see Second Bank of the United States. 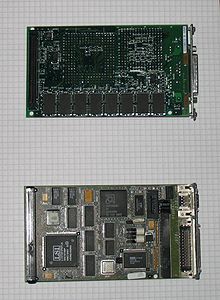 SBus is a computer bus system that was used in most SPARC-based computers (including all SPARCstations) from Sun Microsystems and others during the 1990s. It was introduced by Sun in 1989 to be a high-speed bus counterpart to their high-speed SPARC processors, replacing the earlier (and by this time, outdated) VMEbus used in their Motorola 68020- and 68030-based systems and early SPARC boxes. When Sun moved to open the SPARC definition in the early 1990s, SBus was likewise standardized and became IEEE-1496. In 1997 Sun started to migrate away from SBus to the Peripheral Component Interconnect (PCI) bus, and today SBus is no longer used.[1]

The industry's first third-party SBus cards were announced in 1989 by Antares Microsystems; these were a 10BASE2 Ethernet controller, a SCSI-SNS host adapter, a parallel port, and an 8-channel serial controller.

The specification was published by Edward H. Frank and James D. Lyle.[1] A technical guide to the bus was published in 1992 in book form by Lyle,[2] who founded Troubador Technologies. Sun also published a set of books as a "developer's kit" to encourage third-party products.[3]

SBus is in many ways a "clean" design. It was targeted only to be used with SPARC processors, so most cross-platform issues were not a consideration. SBus is based on a big-endian 32-bit address and data bus, can run at speeds ranging from 16.67 MHz to 25 MHz, and is capable of transferring up to 100 MB/s. Devices are each mapped onto a 28-bit address space (256 MB). Only eight masters are supported, although there can be an unlimited number of slaves.

When the 64-bit UltraSPARC was introduced, SBus was modified to use clock doubling and transfer two 32-bit data words per cycle to produce a 200 MB/s 64-bit bus. This variant of the SBus architecture used the same 96-pin connector as the older one.

SBus cards had a very compact form factor for the time. A single-width card was 3 inches (76 mm) wide by 5 inches (130 mm) long and is designed to be mounted parallel to the motherboard. This allowed for three expansion slots in the slim "pizza box" enclosure of the SPARCstation 1.[4] The design also allows for double- or triple-width cards that take up two or three slots, as well as double-height (two 3x5 inch boards mounted in a "sandwich" configuration) cards.

SBus was originally announced as both a system bus and a peripheral interconnect that allowed input and output devices relatively low latency access to memory.[5] However, soon memory and central processing unit (CPU) speeds outpaced I/O performance. Within a year some Sun systems used MBus, another interconnection standard, as a CPU—memory bus. The SBus served as an input/output bus for the rest of its lifetime.

Retrieved from "http://en.turkcewiki.org/w/index.php?title=SBus&oldid=925876706"
This website is a mirror of Wikipedia, and is not affiliated with the Wikimedia Foundation.
Categories:
Hidden categories: