Jump to navigation Jump to search
Geographic area that is located outside towns and cities
"The country" and "Rural" redirect here. For other uses, see Country (disambiguation) and Rural (disambiguation). 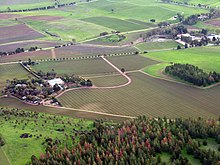 The Barossa Valley in South Australia is an area noted for vineyards. 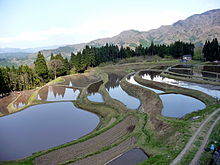 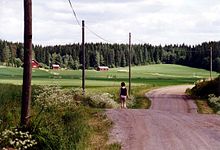 In general, a rural area or countryside is a geographic area that is located outside towns and cities.[1] The Health Resources and Services Administration of the U.S. Department of Health and Human Services defines the word rural as encompassing "...all population, housing, and territory not included within an urban area. Whatever is not urban is considered rural."[2]

Typical rural areas have a low population density and small settlements. Agricultural areas are commonly rural, as are other types of areas such as forests. Different countries have varying definitions of rural for statistical and administrative purposes.

A rural landscape near Mount Shasta in California
Main article: Rural areas in the United States

84% of the United States' inhabitants live in suburban and urban areas,[3] but cities occupy only 10 percent of the country. Rural areas (villages) occupy the remaining 90 percent. The U.S. Census Bureau, the USDA's Economic Research Service, and the Office of Management and Budget (OMB) have come together to help define rural areas. United States Census Bureau: The Census Bureau definitions (new to the 2000 census), which are based on population density, defines rural areas as all territory outside Census Bureau-defined urbanized areas and urban clusters.

Under the Core Based Statistical Areas used by the OMB (commonly referred to as 'CBSA Codes'),[5]

National Center for Education Statistics (NCES) revised its definition of rural schools in 2006 after working with the Census Bureau to create a new locale classification system to capitalize on improved geocoding technology.

Rural health definitions can be different for establishing under-served areas or health care accessibility in rural areas of the United States. According to the handbook, Definitions of Rural: A Handbook for Health Policy Makers and Researchers, "Residents of metropolitan counties are generally thought to have easy access to the relatively concentrated health services of the county's central areas. However, some metropolitan counties are so large that they contain small towns and rural, sparsely populated areas that are isolated from these central clusters and their corresponding health services by physical barriers." To address this type of rural area, "Harold Goldsmith, Dena Puskin, and Dianne Stiles (1992) described a methodology to identify small towns and rural areas within large metropolitan counties (LMCs) that were isolated from central areas by distance or other physical features." This became the Goldsmith Modification definition of rural. "Bhoomeet rural education The Goldsmith Modification has been useful for expanding the eligibility for federal programs that assist rural populations—to include the isolated rural populations of large metropolitan counties."

Health care delivery in rural areas of the United States can be challenging. From 2005-2011, the rate of potentially preventable hospitalizations for acute conditions was highest in rural areas (as compared to large metropolitan, small metropolitan, or micropolitan areas).[7]

In Brazil, there are different notions of rural area and countryside. Rural areas are any place outside a municipality's urban development (buildings, streets) and it's carried by informal usage. Otherwise, countryside (interior in Portuguese) are officially defined as all municipalities outside the state/territory capital's metropolitan region. Some states as Mato Grosso do Sul doesn't have any metropolitan region, thus all of the state, except its capital is officially countryside. Rio de Janeiro is singular in Brazil and it's de facto a metropolitan state, as circa 70% of its population are located in Greater Rio. In the Federal District it's not applicable and there's no countryside as all of it is treated as the federal capital. Brasília is nominally the capital, but the capitality is shared through all Federal District, because Brazil de facto defines its capital as a municipality, and in municipal matters, the Federal District is treated and governs as a single municipality, city-state-like (Brasília, DF).

35 % of French population live in rural areas, spread over 90 % of the country. President Emmanuel Macron governement launched an action plan in 2019 in favour for rural areas named "Agenda Rural" [8]. Among many initiatives recommended to redynamize rural areas, energy transition is one of them. Research is being carried out to assess the impact of new projects in rural areas [9]

The country is divided into 402 administrative districts: 295 rural districts and 107 urban districts. Germany is among the largest agricultural producers in the European Union. More than half of Germany's territory – almost 19 million hectares[10] – is used for farming, and are located in the rural areas. Almost 10% of employees in Germany has work linked directly or indirectly with the agricultural, forest and fisheries sectors; approximately a fifth of them are employed in primary production. The implication is that, unlike in some other European countries, where rural areas are known for being backward when compared to urban areas, in Germany, the style is changing. Due to the country's policy of equal living conditions, this is not the case in Germany. Rural areas receive nearly equivalent attention as the urban areas do. Also, through a special approach to rural development, usually referred to as Village Renewal, the challenges of rural Germany are taken care of.[11] 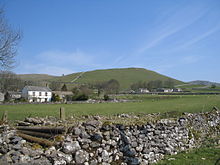 In Britain, "rural" is defined[12] by the government Department for Environment, Food and Rural Affairs (DEFRA), using population data from the latest census, such as the United Kingdom Census 2001. These definitions have various grades, but the upper point is any local government area with more than 26% of its population living in a rural settlement or market town ("market town" being defined as any settlement which has permission to hold a street market). A number of measures are in place to protect the British countryside, including green belts.

In England an NHS patient is defined as rural if they live more than 1 mile (1.6 km) from either a doctor or a dispensing chemist. In Scotland a different definition of rural is used. This is important for defining whether the patient is expected to collect their own medicines. While doctors' surgeries in towns will not have a medicines dispensary instead expecting patients to use a high-street chemist to purchase their prescription medicines (in Scotland collection not purchase, as prescriptions are paid by the state), in rural village surgeries,[13] an NHS medicines dispensary will be built into the same building.

A rural village in Rajasthan, India

Rural areas are also known as the 'countryside' or a 'village' in India. It has a very low population density. In rural areas, agriculture is the chief source of livelihood along with fishing,[14] cottage industries, pottery etc.

The quest to discover the real rural India still continues in great earnest. Almost every economic agency today has a definition of rural India. Here are a few definitions: According to the Planning Commission, a town with a maximum population of 15,000 is considered rural in nature. In these areas the panchayat makes all the decisions. There are five people in the panchayat. The National Sample Survey Organisation (NSSO) defines ‘rural’ as follows:

It is generally said that the rural areas house up to 70% of India's population. Rural India contributes a large chunk to India's GDP by way of agriculture, self-employment, services, construction etc. As per a strict measure used by the National Sample Survey in its 63rd round, called monthly per capita expenditure, rural expenditure accounts for 55% of total national monthly expenditure. The rural population currently accounts for one-third of the total Indian FMCG sales.[15]

In Japan, rural areas are referred to as "Inaka" which translates literally to "the countryside" or "one's native village".[16][17] 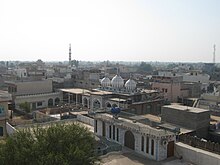 According to the 2017 census about 64% of Pakistanis live in rural areas. Most rural areas in Pakistan tend to be near cities, and are peri-urban areas. This is due to the definition of a rural area in Pakistan being an area that does not come within an urban boundary.[18] The remote rural villagers of Pakistan commonly live in houses made of bricks, clay or mud. Socioeconomic status among rural Pakistani villagers is often based upon the ownership of agricultural land, which also may provide social prestige in village cultures. The majority of rural Pakistani inhabitants livelihoods is based upon the rearing of livestock, which also comprises a significant part of Pakistan's gross domestic product. Some livestock raised by rural Pakistanis include cattle and goats. However rural areas in Pakistan that are near cities are considered suburban areas or suburbs.

Retrieved from "http://en.turkcewiki.org/w/index.php?title=Rural_area&oldid=968813855"
This website is a mirror of Wikipedia, and is not affiliated with the Wikimedia Foundation.
Categories:
Hidden categories: