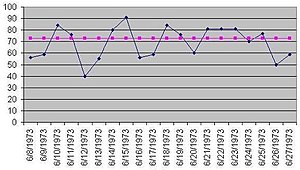 A simple run chart showing data collected over time. The median of the observed data (73) is also shown on the chart.

A run chart, also known as a run-sequence plot is a graph that displays observed data in a time sequence. Often, the data displayed represent some aspect of the output or performance of a manufacturing or other business process. It is therefore a form of line chart.

With run sequence plots, shifts in location and scale are typically quite evident. Also, outliers can easily be detected. 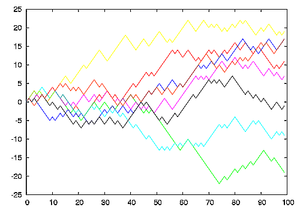 Run chart of eight random walks in one dimension starting at 0. The plot shows the current position on the line (vertical axis) versus the time steps (horizontal axis).

Examples could include measurements of the fill level of bottles filled at a bottling plant or the water temperature of a dish-washing machine each time it is run. Time is generally represented on the horizontal (x) axis and the property under observation on the vertical (y) axis. Often, some measure of central tendency (mean or median) of the data is indicated by a horizontal reference line.

Run charts are analyzed to find anomalies in data that suggest shifts in a process over time or special factors that may be influencing the variability of a process. Typical factors considered include unusually long "runs" of data points above or below the average line, the total number of such runs in the data set, and unusually long series of consecutive increases or decreases.[1]

Retrieved from "http://en.turkcewiki.org/w/index.php?title=Run_chart&oldid=948990166"
This website is a mirror of Wikipedia, and is not affiliated with the Wikimedia Foundation.
Categories:
Hidden categories: