Royal Commission into the Operation of the Poor Laws 1832 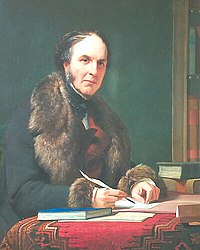 Nassau William Senior was an advocate of the centralization of the Poor Law system.

The 1832 Royal Commission into the Operation of the Poor Laws was a group set up to decide how to change the Poor Law systems in England and Wales. The group included Nassau Senior, a professor from Oxford University who was against the allowance system, and Edwin Chadwick, who was a Benthamite. The recommendations of the Royal Commission's report were implemented in the Poor Law Amendment Act 1834.

The findings of the Poor Law Commissioners, published in thirteen volumes, began appearing in February 1833.[2][3] They were used to argue that the existing system of poor relief needed a radical overhaul.

The nine members of the Central Board of the Commission were:,[1][4]

The writers of the report suggested radical changes to English Poor Laws:

There was strong support for the report from all sides of Parliament. The report's ideas were quickly passed into law. The Whigs controlled the House of Commons and supported the utilitarian arguments of thinkers such as Jeremy Bentham. Those that did not support the bill were more concerned with the levels of centralisation the act would bring rather than the recommendations of the report such as the building of workhouses.

The report lowered the cost of poor relief which was a concern of MPs.

There is evidence that Nassau Senior had written the report before the data was collected – therefore evidence was used selectively to meet the pre-written report. Of the questionnaires sent out only 10% replied and some of the questioned directed a certain response. However, the inquiry was not supposed to be impartial, the commission wanted to change the existing system, and keeping the current system was not considered an option.[6] The questionnaires used asked leading questions that were poorly framed leading to responses that were ambiguous or irrelevant.[7]

Retrieved from "http://en.turkcewiki.org/w/index.php?title=Royal_Commission_into_the_Operation_of_the_Poor_Laws_1832&oldid=945961569"
This website is a mirror of Wikipedia, and is not affiliated with the Wikimedia Foundation.
Categories: