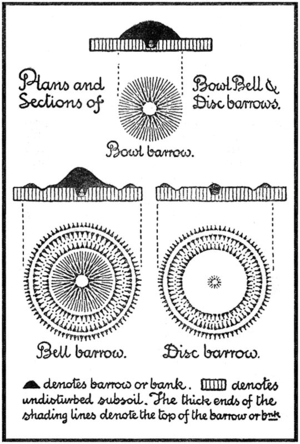 Schematic plans and sections of various types of round barrow

A round barrow is a type of tumulus and is one of the most common types of archaeological monuments. Although concentrated in Europe, they are found in many parts of the world, probably because of their simple construction and universal purpose.[citation needed]

In Britain, most of them were built between 2200BC and 1100BC. [1]. This was the Late Neolithic period to the Late Bronze Age. Later Iron Age barrows were mostly different, and sometimes square.[2]

At its simplest, a round barrow is a hemispherical mound of earth and/or stone raised over a burial placed in the middle. Beyond this there are numerous variations which may employ surrounding ditches, stone kerbs or flat berms between ditch and mound. Construction methods range from a single creation process of heaped material to a complex depositional sequence involving alternating layers of stone, soil and turf with timbers or wattle used to help hold the structure together.

The center may be placed a stone chamber or cist or in a cut grave. Both intact inhumations and cremations placed in vessels can be found.

Many round barrows attract surrounding satellite burials or later ones inserted into the mound itself. In some cases these occur hundreds or even thousands of years after the original barrow was built and were placed by entirely different cultures.

Denmark has many tumuli, including round barrows. The round barrows here, were built over a very broad span of time and culture, from the Neolithic Stone Age to the Viking Age and show a large variation of construction design, while sharing a common exterior look.[3] Tumulis were protected by law in 1937.

In Britain round barrows generally date to the Early Bronze Age although Neolithic examples are also known. Later round barrows were also sometimes used by Roman, Viking and Saxon societies. Examples include Rillaton barrow and Round Loaf. Where several contemporary round barrows are grouped together, the area is referred to as a barrow cemetery. 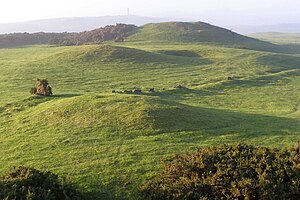 Round barrows on the chalk ridge of Bronkam Hill in Dorset, England. There are numerous round barrows along the south Dorset Ridgeway, including some well-preserved examples of the different sub-types.

Media related to Round barrows at Wikimedia Commons

Retrieved from "http://en.turkcewiki.org/w/index.php?title=Round_barrow&oldid=932925360"
This website is a mirror of Wikipedia, and is not affiliated with the Wikimedia Foundation.
Categories:
Hidden categories: